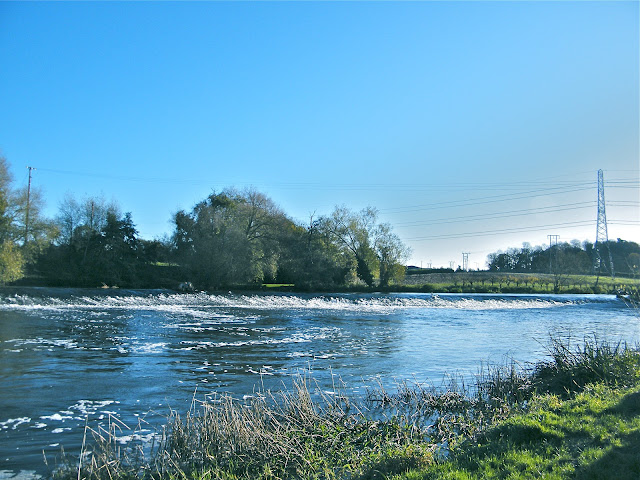 Saturday was a difficult session due to rapidly falling overnight temperatures, a clear sunny sky and a brisk wind blowing plenty of leaves and debris into the water. I decided to start the session after predators and chose one of my favourite Avon weir pools to search for Pike (and Zander-bit naive considering how bright it was!). I tried hard, changed baits and spots several times but could not muster a bite. When I go fishing I like to have a back up plan because I detest blanking and this week that entailed mashed bread and the feeder. 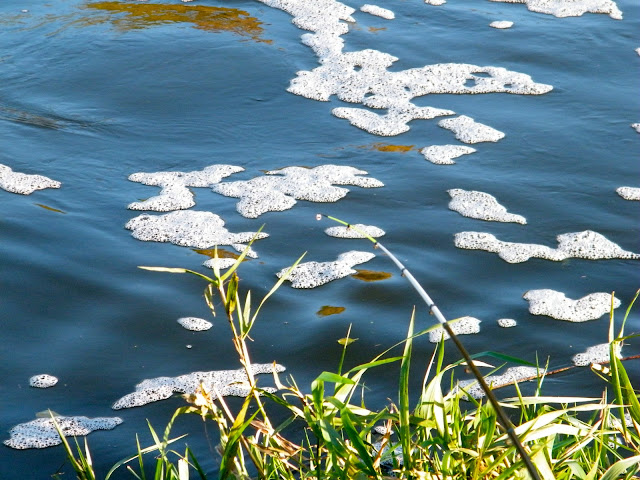 Roach, Chub, Dace, whatever, I wasn't bothered and after feeding a lovely run just downstream I started to get my first indications of fish in the swim. Finally, well into the afternoon I had a strikeable bite and played a Chub of about 3 and a bit pounds to the net. The Chub was not the only thing attracted to the bread though, a pair of Rats kept popping their heads out and rushing off when I startled them. This happened for about half an hour until one ran right over my foot! That was enough for me, I don't mind them if they keep their distance but when they get that brave I'm not keen. I packed up and headed for home.
Not the most exciting of sessions but felt I should post it in the interest of balance, not all the days can be fish filled.
Posted by Joe Chatterton at 21:16 4 comments: Links to this post

A day full of minor disasters that ultimately finished a success.
The alarm went off at 4.30am and for once I did not hit snooze, I was dressed and the kettle was on quick smart. A fishing trip always excites me but this one was more eagerly anticipated than most. The  river Irfon in deepest darkest Wales is a beautiful waterway crammed full of wild Trout and hard fighting Grayling and I love it.
Cue the first disaster, a pea souper outside. Not enough to stop me going but it would make the two hour trip last closer to three. Disaster number two, my sat nav gives up the ghost halfway there. Luckily I was past the complicated bit and pretty much knew the rest of the way but the return journey would be interesting! I arrived at the spot just after 8.00am-not bad considering.
The river looked in great condition, maybe just a little bit too clear! The fish must be somewhere so I dropped into a likely looking run where I couldn't see the river bed, hoping that fish were there. If not I had three pints of maggots that would draw them into the swim anyhow. 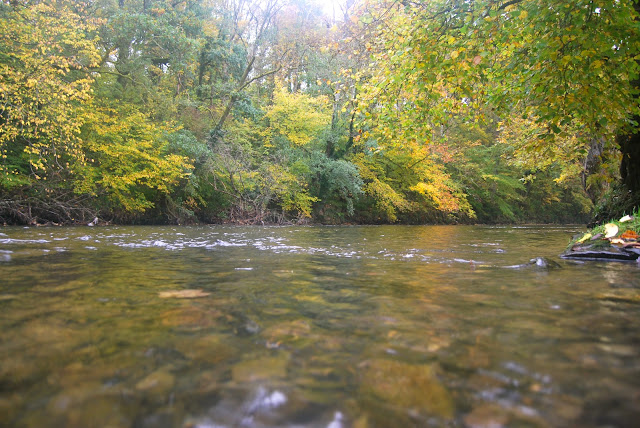 I set up a two swan loafer to 2lb line and a size 18 hook and cast out. Disaster number three, the float got halfway down the glide and stopped, I didn't have enough line on the reel. Luckily there was some 3lb Maxima in the bag so I respooled up the reel, set up again and cast out. Perfect, first run through and fish on, a Grayling weighing 1lb 6oz. 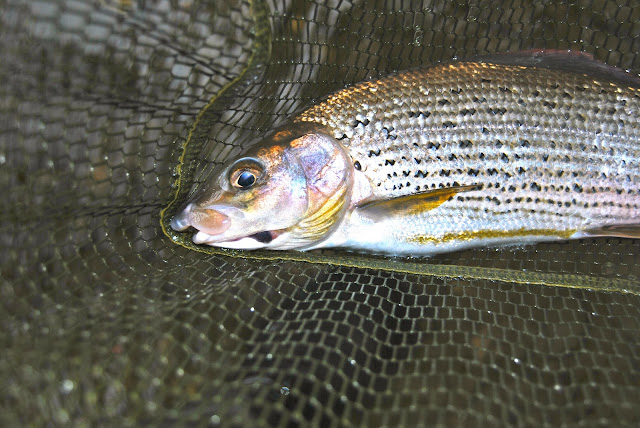 I then realised I had missed out the butt ring with my line so had to set up yet again. Tangles and lost hooks also followed, today was one of those days when you perform poorly, but thankfully I also caught fish, losing count of the number of Brown Trout landed (all carefully looked after because they are out of season) and six Grayling (four over a pound to 1lb 14oz. 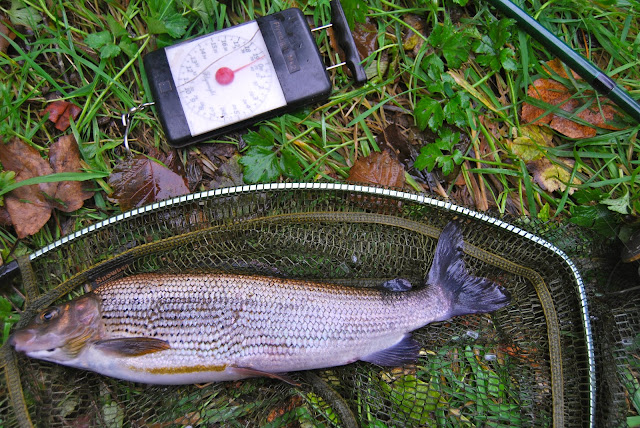 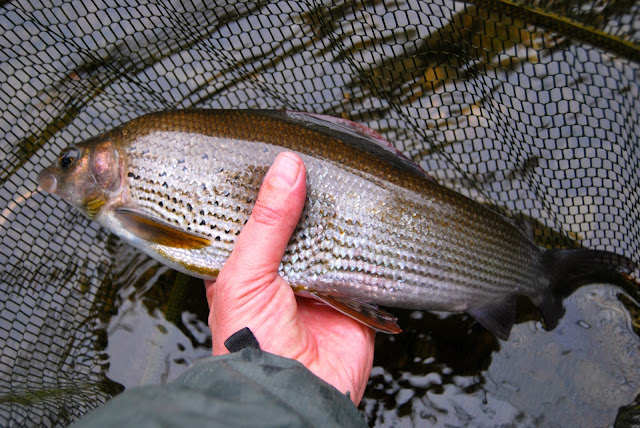 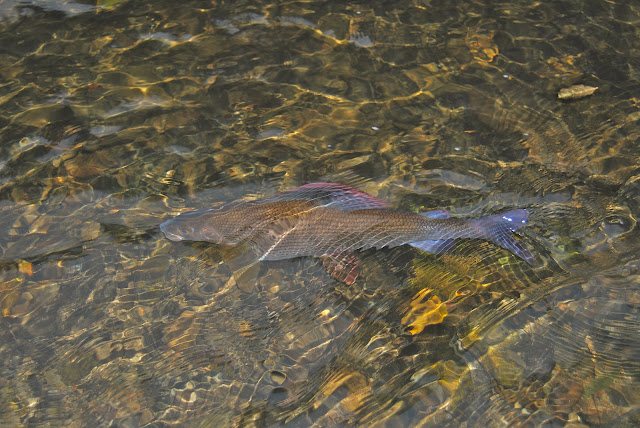 I took several wrong turns on the way home but it was all worth it!

Posted by Joe Chatterton at 22:18 4 comments: Links to this post 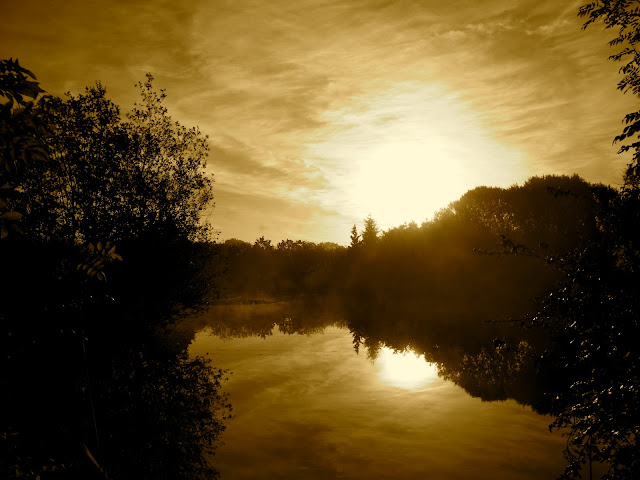 The sun bursts through to melt away the mist on a perfect autumnal morning. The overnight temperature was a little on the low side and that slowed sport for the first few hours until the rays had raised the mercury by a couple of notches, only then did bites start to materialise.
A fortnight ago I had fished Willow farm for Perch but failed miserably however I did stumble across some Silver Bream of the sort of size to make them interesting and today I targeted them properly.
My initial bait was pellet but I changed to worm when that failed. Bites were hard to come by but there were a few indications and I kept feeding chopped worm and maggot into the swim in the hope that things would speed up. In the meantime a Kingfisher kept me amused as it went about getting it's breakfast. It was putting me to shame. 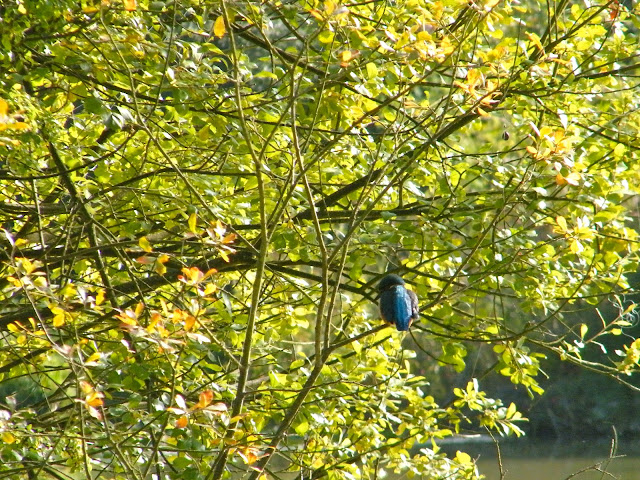 At one point it landed on a branch so close I could have almost reached it but it flew away just before I could press the shutter on the camera-next time!
By lunchtime I started to get amongst the fish facilitated by a another bait change, this time to maggot. Roach, Perch and a few small Silver Bream were caught. I then had a bite on the drop followed by a large swirl and I hooked into a Silver Bream that made me nervous. Early on in the fight I could see that it was a pb and I repeated to myself 'stay on', 'stay on'. Thankfully it did and I slid the net under a 1lb 2oz fish. 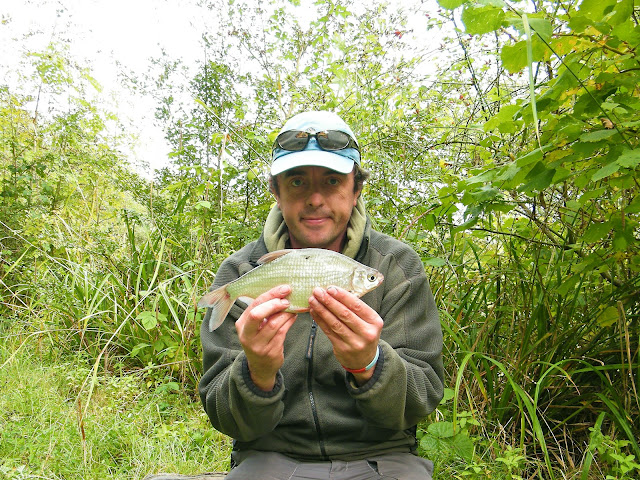 I fished on despite my mission being completed, landed a few more tiddlers. The difficult morning forgotten with just one fish, funny how that happens! 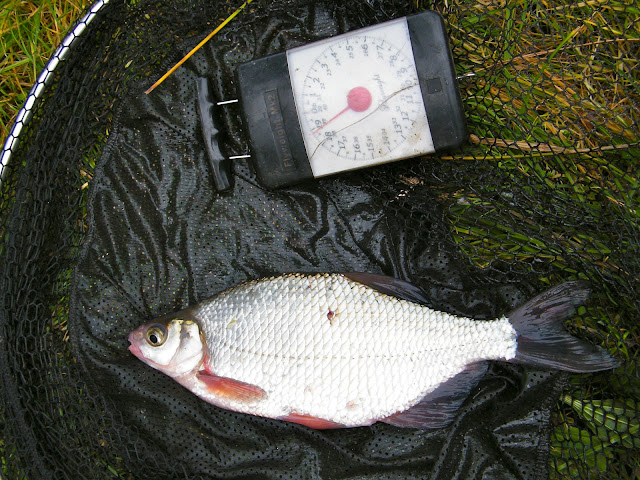 Posted by Joe Chatterton at 16:56 3 comments: Links to this post 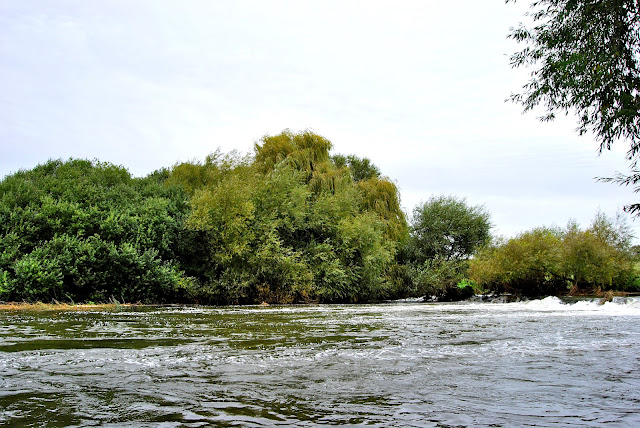 It's nice to set off fishing knowing that there is very little chance of a blank, which is exactly how I felt this morning as I trudged across the soaked fields heading for Barton weir. Heavy overnight rain meant the river would be rising but I knew it would be a few hours before it started to affect the fishing conditions. The lower than recent temperatures would not matter either as I was chasing Dace, a fish that will feed in all but the very extreme temperatures.
My tactics were simple.... 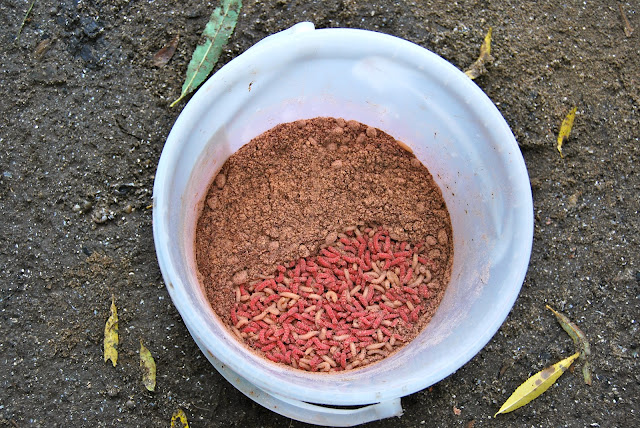 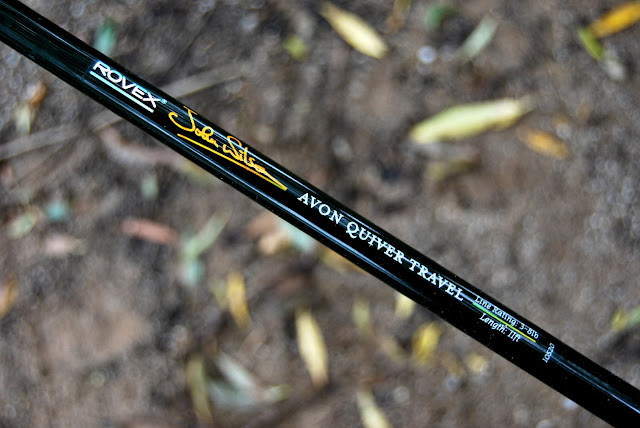 one rod, a John Wilson travel avon, easy to transport and light...... 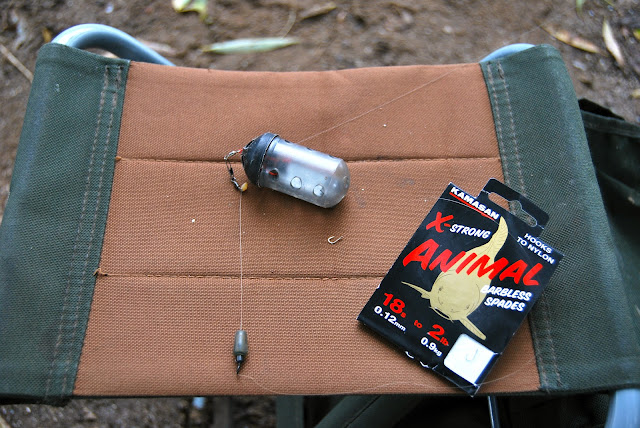 and a simple running rigged black cap feeder with a float stop to create a self hooking/bolt effect. Barbless hooks because they are easier to extract from small delicate mouths leaving no damage. 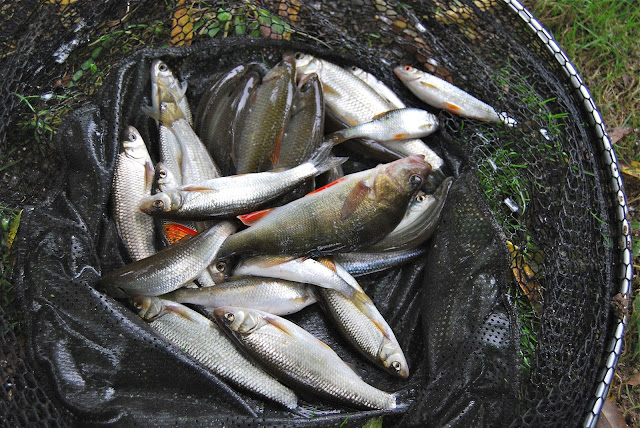 I caught a Dace first cast into the fast water and a steady succession followed mixed in with a couple of Perch, Roach and a big Gudgeon. 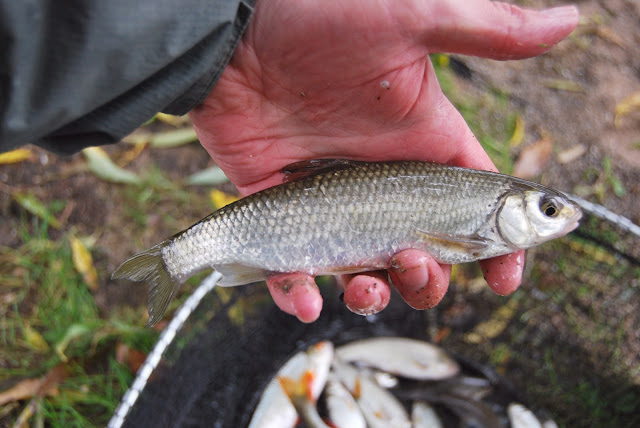 I gave up at 2pm, the bites had slowed up, the river had risen three inches, I was freezing cold(must dig out the long johns) and I had just lost my third feeder to an unseen snag. 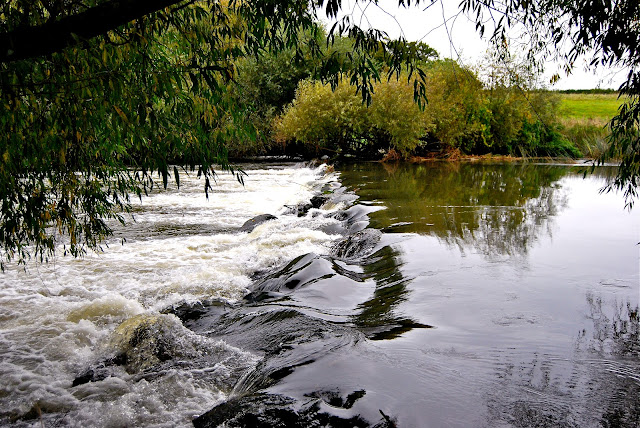 An enjoyable day chasing a stunning diminutive fish that are very obliging.


Posted by Joe Chatterton at 16:24 No comments: Links to this post