Day One-Monday
The sun rises over the hills and so begins our  Spanish adventure. Having arrived the night before we had a couple of San Miguel's in the bar with our guide (John 'here's a story for you' Deakin), for the week followed by an early night in anticipation of the 7.00am start. The weather forecast was for a sunny start to the week getting colder on Thursday and Friday. Thankfully their forecasters are as good as ours and it was warm and dry all week.
Fishing in Spain is only allowed between sunrise and midnight and as the fish only really become active between 10pm and midnight there is a lot of waiting involved.

Our party consisted of myself, Cockney Steve and John and it was John who had the first fish, a 114lber. 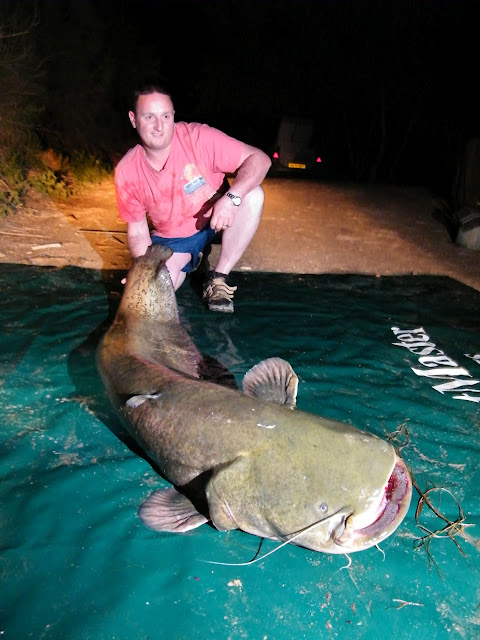 I then had an aborted run at about 9.45pm and that was the end of the action for day one.


Day Two-Tuesday
A cloudy start made way for glorious sunshine by 10am and then at 3.30pm we had a tremendous thunderstorm that lasted a whole three minutes followed by more sunshine.
The fishing was slow throughout the day. At 9pm I struck into my first fish of the trip, 38lb. At least I was up and running. 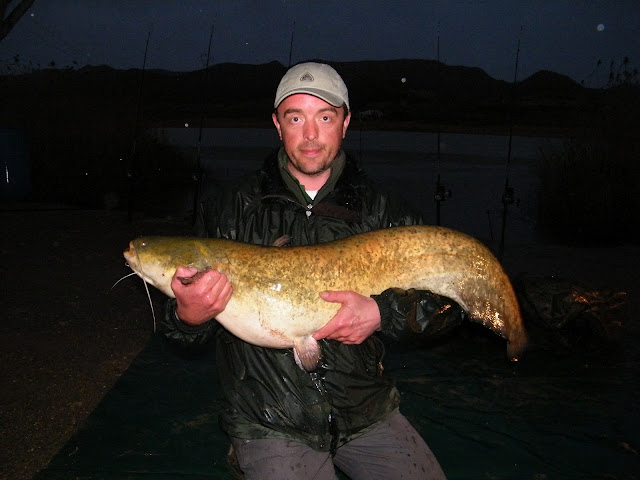 The action was fast and furious that evening and we landed a total of six cats for a massive 533lb.
I had a 68lb fish. 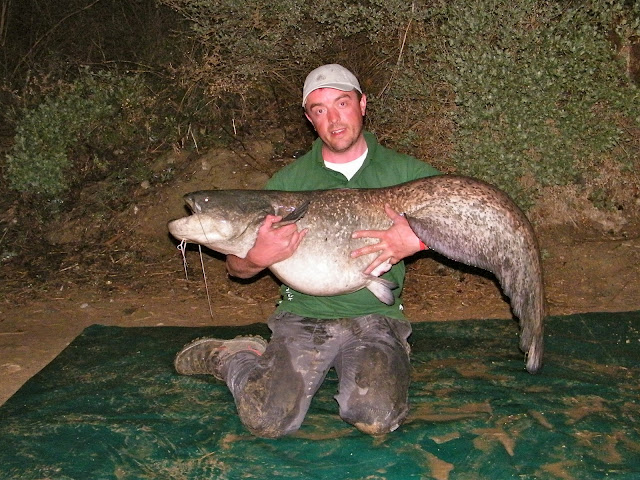 John had a 58lb fish and a super 138lb specimen which Ryan (the apprentice guide) helped him display. 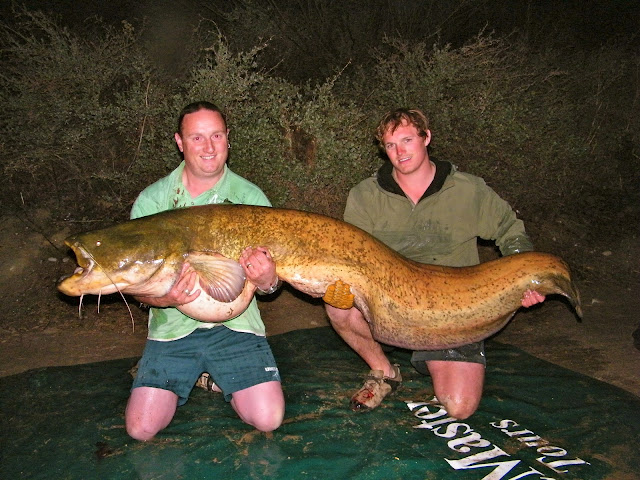 But Steve thrashed us both with an 87lber and an excellent 144lb beauty(photo to follow).


Day Three-Wednesday
Following that cracking night we were buzzing and full of expectation. The inevitable happened, we blanked! This often happens, lots of fish then no fish and it had me worrying. Three days done, halfway through the week and I was the only angler without a 'ton' fish. I couldn't come all the way to Spain and not have a biggie-could I?

Day Four-Thursday
John started us off with a 25 and finally my moment arrived when I landed my 'ton'. I breathed a sigh of relief as the scales went round to 119lb. 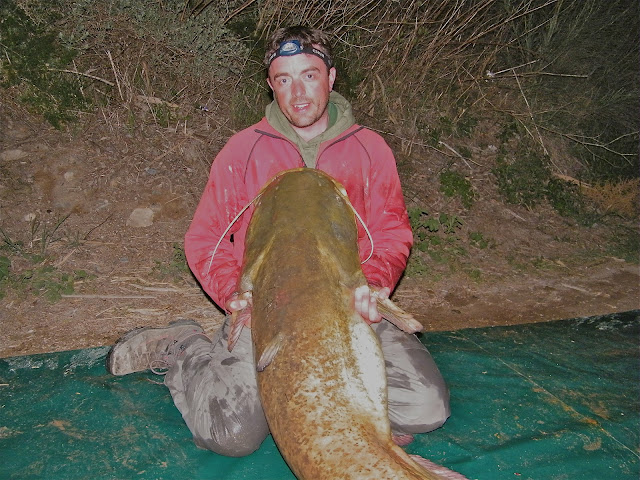 I could go home fairly pleased but now I had a new target, I wanted to beat my pb, a 126lb fish caught 18 months ago.
Steve added his second ton of the week weighing 121lb, he was flying! (photo to follow)

It was my turn for the early fish and I started with what we guessed to be a 20lber (not even weighing these now but I would be made up with this fish in England!) 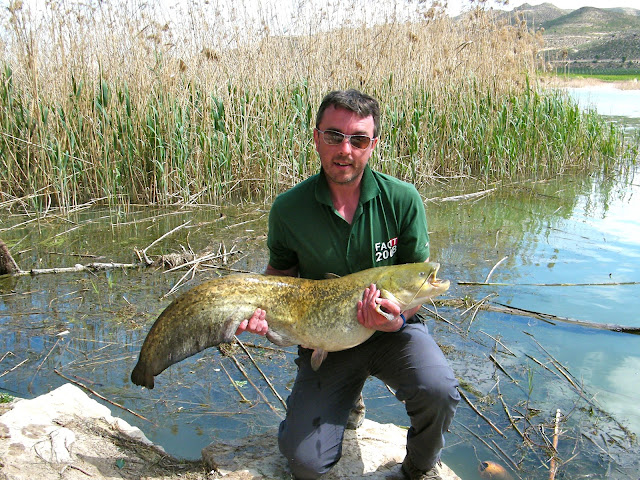 and I followed that with a 116lber 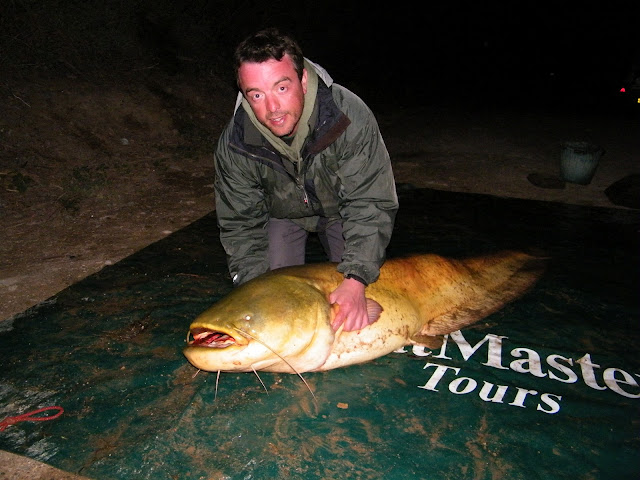 Catfish are not the prettiest of fish but they are amazing looking creatures, this one however had an awful growth on it's side and a hunch back. We took a quick picture and back it quickly went. It didn't need too much stress.
That evening Steve added a 25 and a 40 and I also had a 25. By now we weren't even photographing these fish just putting them straight back. Fish size is totally relative to the water you are fishing and this river spoils you.

The final morning of our tour we decided to head up the hills above the Ebro dam and try for something a bit different. The Spanish claim to have the best freshwater Bass fishing outside America and we saw plenty of them but it was pretty frustrating. John managed to land one of about a pound and I hooked and lost one that was a bit bigger. 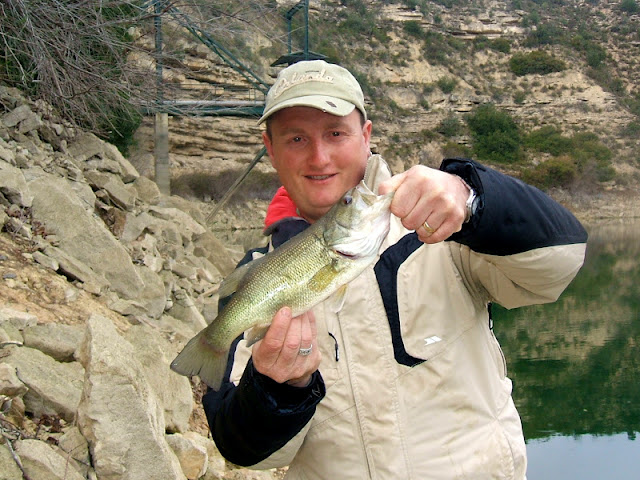 About mid afternoon we went back to the serious business of Catfishing. It was way back on Tuesday when Steve had had the biggest Catfish and John and I wanted to try to beat it.
At 10.15pm one of my rods hooped over and stayed there and I knew I was connected to a good fish. It took line from a fully tightened clutch which none of my previous fish had managed and when I managed to get it into the margins I knew I had a new personal best. 152lb of solid Spanish Catfish. Doesn't Steve look really pleased for me! 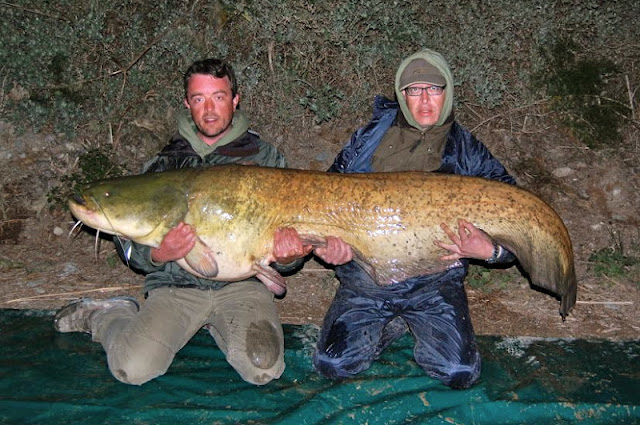 My third pb in four weeks and a biggest ever fish.

I stopped fishing after that letting John and Steve take over my rods and I just chilled with a few San Miguel's. I was happy and confident that the action was over but at 11.57pm (yes, only 3 minutes left of our holiday!) Steve's rod doubled up and it took both him and John to get it out of the rest. Was it a serious fish or was he just being a wuss? Twenty minutes later and we saw it was serious, by far the biggest Cat I had ever seen and when four of us lifted it onto the bank I thought it was a 200! It wasn't far off at 182 1/2lb and right at the very end, on the whistle, in extra time he had done me.
What a beast. 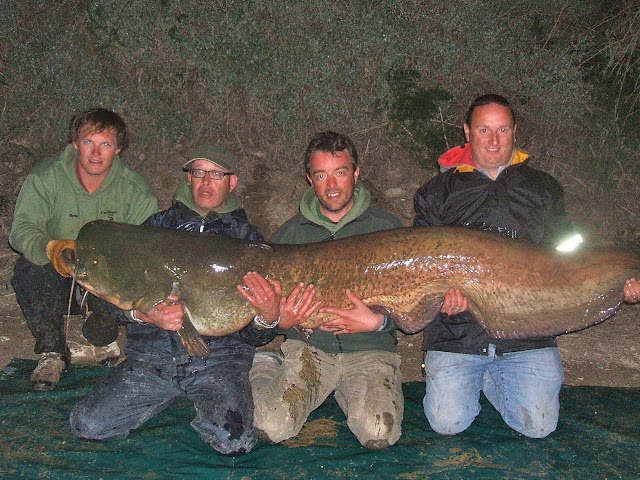 Thanks to John and Ryan, our guides and 'Catmaster' for a wonderful week.

Posted by Joe Chatterton at 07:51 12 comments: Links to this post