Surprises on the Itchen 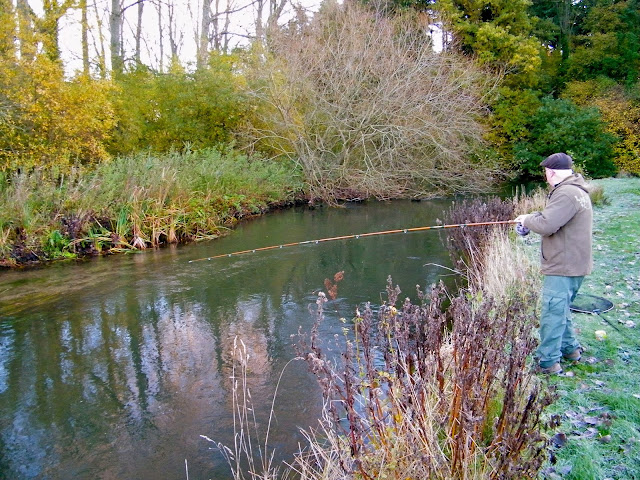 Our successful sortie on the river Test gave us a hankering for some more chalkstream action so we booked a day on the Test's shorter cousin the river Itchen. Like the Test the Itchen is a predominantly Hampshire river rising from the chalk aquifer at the Hampshire Downs then flowing some 28 miles through Winchester before joining the Solent in Southmpton. Most of the river has been designated as a Site of Special Scientific Interest due to the presence of seven species which are Brook Lamprey, Salmon, Otters, Bullheads, White-claw Crayfish, Souther Damselfly and Water Crowfoot. The water quality is superb and must be to support these species.

Dave arrived first having stayed locally overnight and was just finishing off setting up when we landed. He was doing things the right way, split cane rod and centre pin reel. His target was the same as mine, Grayling but Martin also had a hankering for some oversized Chub which inhabit this stretch alongside the ubiquitous game fish.
We would all begin by trotting floats although some would fall by the wayside and end up chucking out feeders later in the day, sacrilege!
My own set up was simple, 13 foot float rod, fixed spool reel, 5lb line straight through (possibly a little overgunned but you never know what might turn up!) to a strong size 18 hook plus a bucketful of red and white maggots. The approach would be a roving one searching as much water as possible before picking the best swim possible for the last couple of hours of light. This river was new to me and I wanted to fish as much of it as I could in the little time we had available. 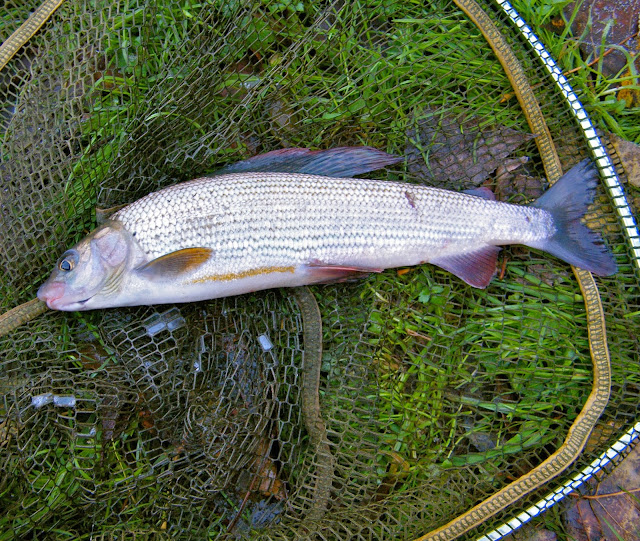 The first swim I tried drew a blank but the next one produced a Grayling first trot and the another straight after, both around the pound mark. My Grayling photos are always net shots even if someone is close by to help. They fight as well on the bank as they do in the water and are so wiry that holding them is nearly impossible. It just causes them too much stress and then they end up belly up in the water, pointless trying, they are too delicate! 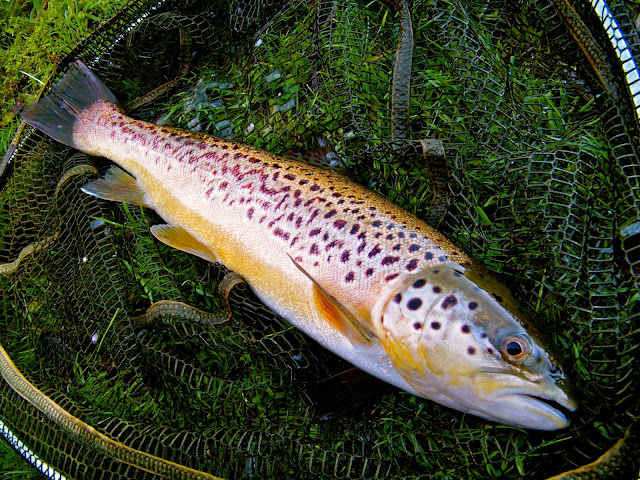 The fishing continued along that vain taking fish from each swim including some cracking but out of season Brownies. I was really hoping for big Grayling but they were all around the pound mark, the Trout tending to be bigger going to about two pounds in weight. 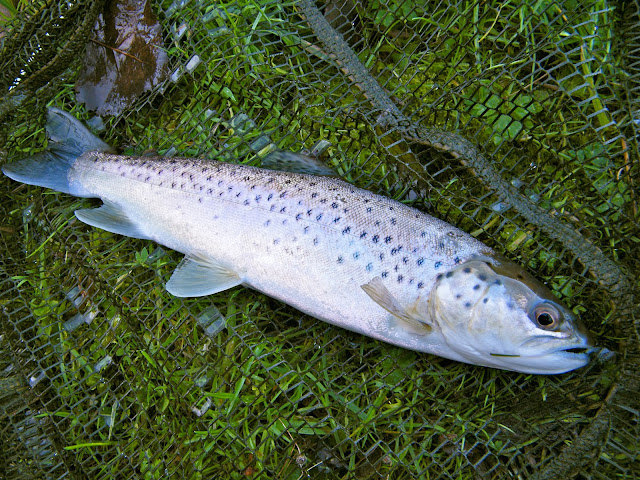 An interesting aside for me was the Sea Trout. I have never caught any Sea Trout before so an instant personal best was achieved with my first one, weighing twelve ounces. They are impressive battlers going mental when they are hooked but they can quickly ruin a swim for any subsequent fish! 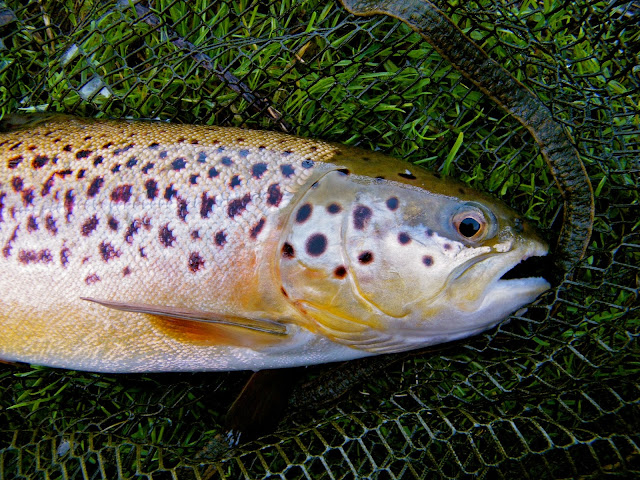 Several more Grayling and Brownies were landed before my mobile rang, well it rang three times before I answered it, I hate my phone with a passion when I am fishing! Turned out to be Martin who had a Salmon in the net that needed photos and weighing. 5lb of stunningly coloured male Silver tourist had fallen for double red maggot. 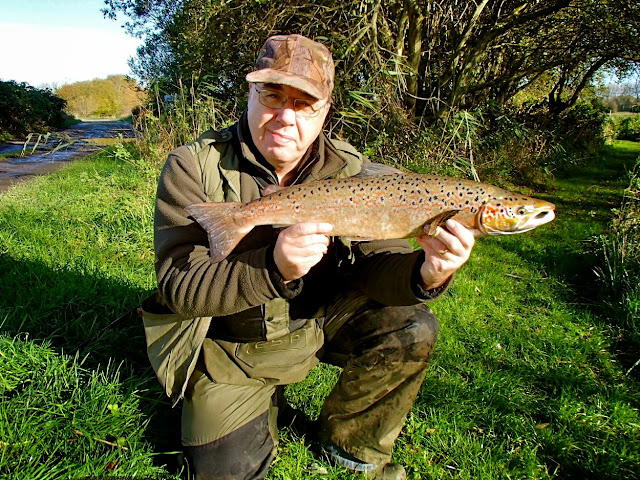 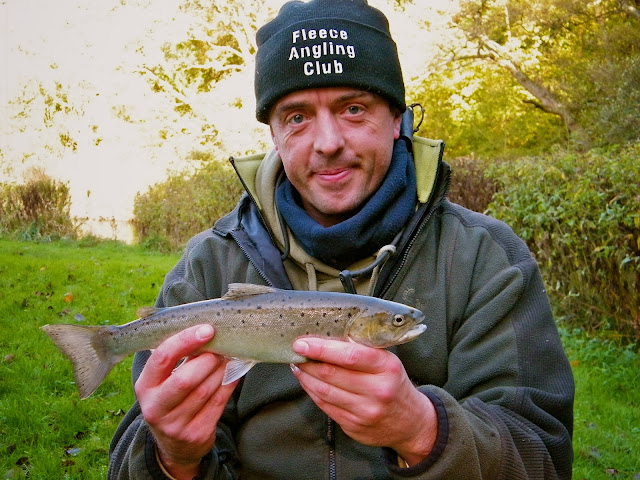 With the Salmon returned lunchtime was upon us and classy Dave continued his 'doing it the right way' theme as he helped himself to a glass of Cabernet Sauvignon with his sandwiches and bathed in some welcome Winter sunshine, 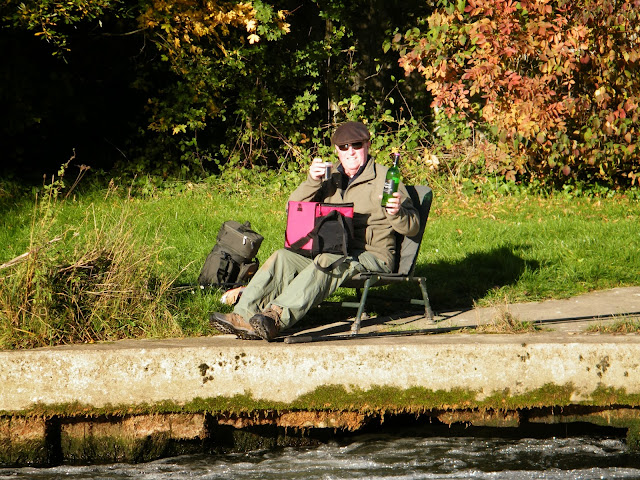 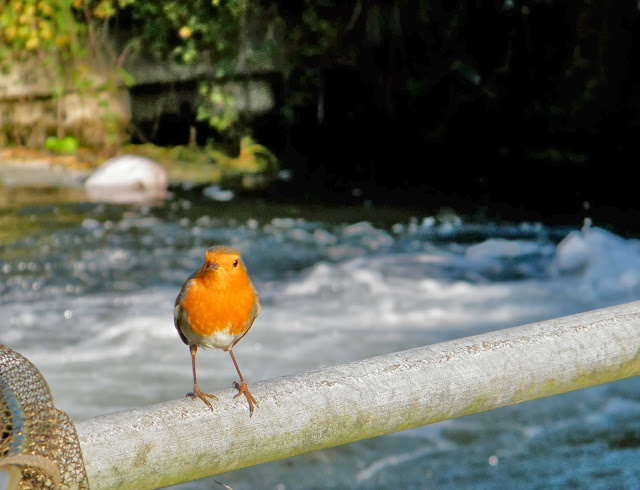 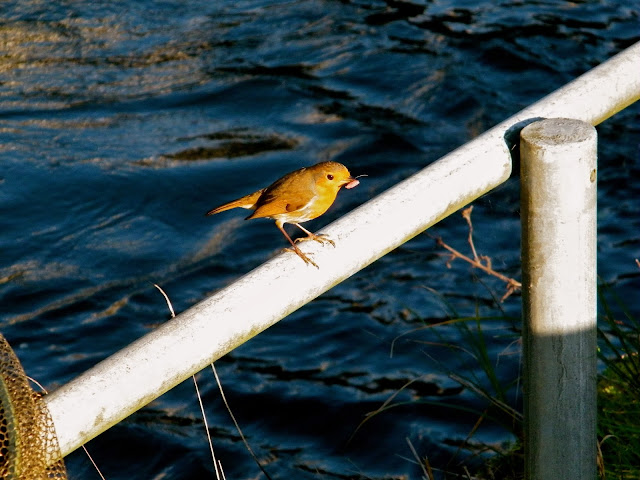 and a cheeky Robin helped itself to Martin's maggots while his back was turned.

The other boys had dropped down to the lower end of the fishery by the mill race but it turned out not too successful meanwhile I went back upstream to Grayling country. I steadily fed a lovely looking run and after about ten minutes I hooked into an absolute nutter of a Sea Trout that gave me the scrap of the day. Twice it leapt clean out of the water and I ended up walking 30 yards downstream to net it. The flow in the swim was powerful enough to rip the hook out if I had tried to pull it upstream. 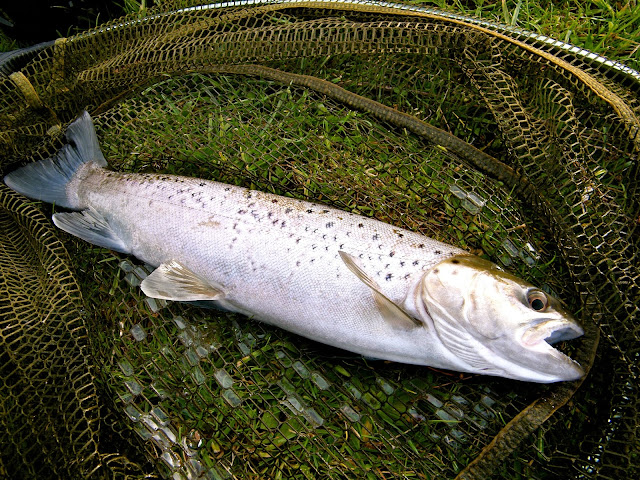 Another new pb at 1lb 8oz and another Trout destroyed swim so I decided on one final move. A cracking swim I had dropped in earlier where the main flow was pushed under some trees on the far bank. I landed several more fish including Grayling, Trout, Sea Trout and a bonus Chub of about 2 1/2 lb. I trotted until I could not see the float any more.
A stunning sunset provided a fitting finale to another great day of chalk stream angling, cheers. 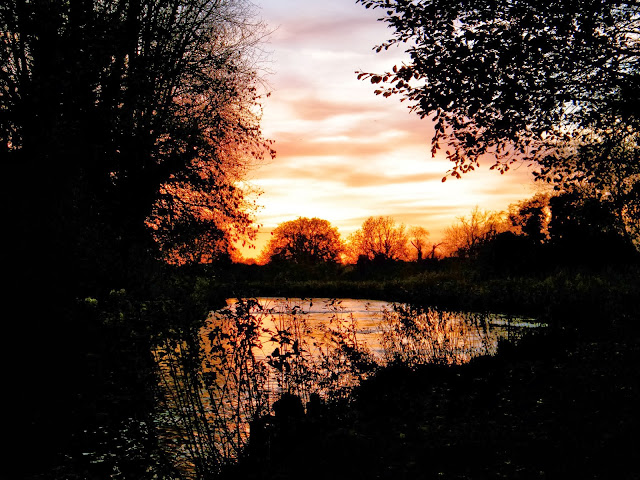 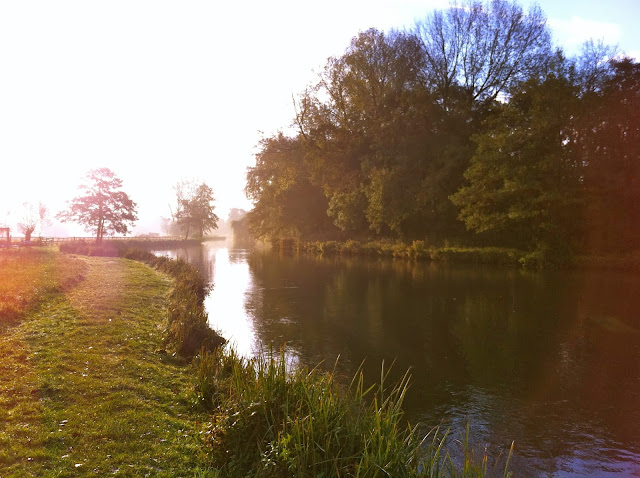 The early morning sun begins to burn off the overnight mist as we take our first look at the river Test, one of England's finest chalk streams world famous for it's superb fishing. It is also the longest (40 miles) of Hampshire's chalk streams and the crystal-clear waters are so clean they are used to wash the paper for making bank notes!
Rivers of this quality are normally the reserve of noblemen and gentry where they practice the art of fly fishing in it's inaugural home so why were three numpties from the Midlands stepping out on this hallowed ground?
Nowadays certain sections are open for day ticket, and at this time of year even for coarse anglers allowing them to fish for big Grayling, large Roach and Dace and massive Pike. An opportunity Martin, Baz and myself wanted to take full advantage of. 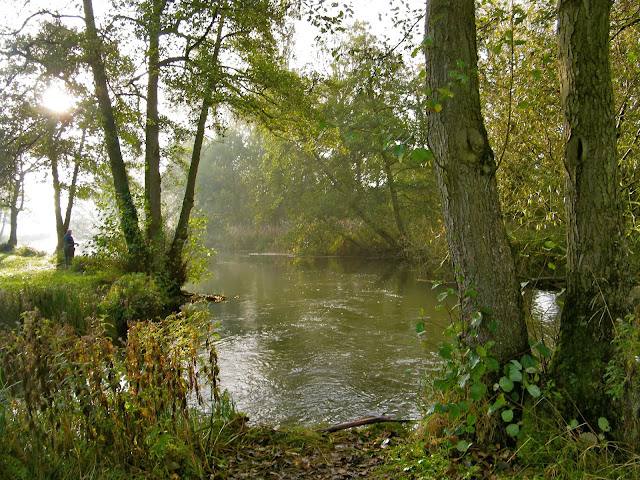 Really I should have brought the fly gear, it would have been the right thing to do but I fancied trotting for her ladyship the Grayling. I also had the feeder rod in the bag but that is where it stayed, it would have been a step too far, chucking out a 'plastic pig' into this hallowed water, I couldn't bring myself to do it! My rig consisted of 5lb line straight through to a size 18 Drennan specimen hook. A strong set up that could deal with any monsters that I may hook during the session.
We all caught steadily throughout the day, loads of Grayling, sadly none over 2lb but hard fighting quality fish up to about 1 1/2 lb. 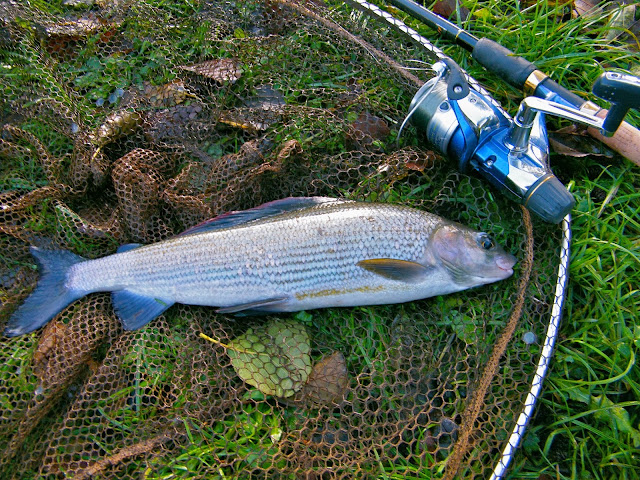 Interspersed with the Grayling were the inevitable Brown Trout. They can be a real nuisance when Grayling are the target but I relish them when they came along. These stunning creatures were great fun, huge and fought like stink on the light float rod I was using.
They are out of season at the moment and the beat has a strict policy on no photos of Brownies but I am sorry I could not resist, magnificent specimen and a new pb to boot. I only took very quick net shots and then released the fish quickly, no harm done!
I roamed around the beat even fishing the carrier streams too..... 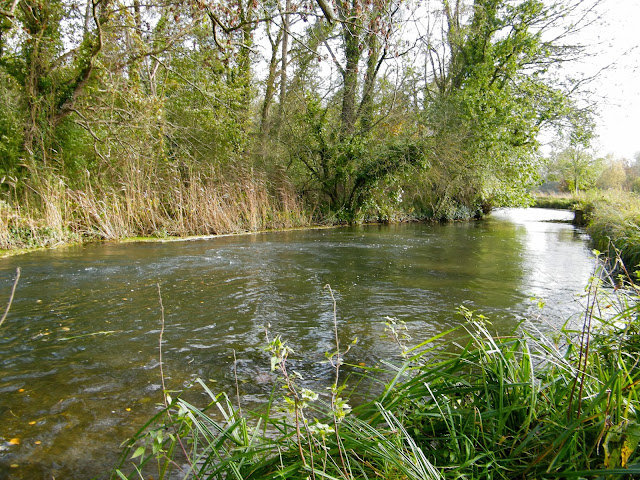 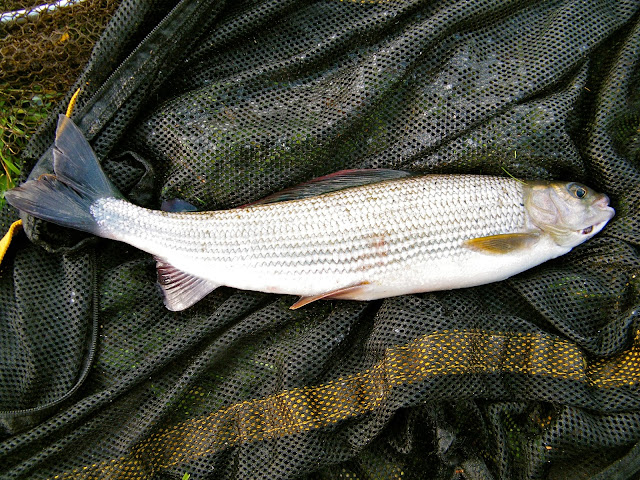 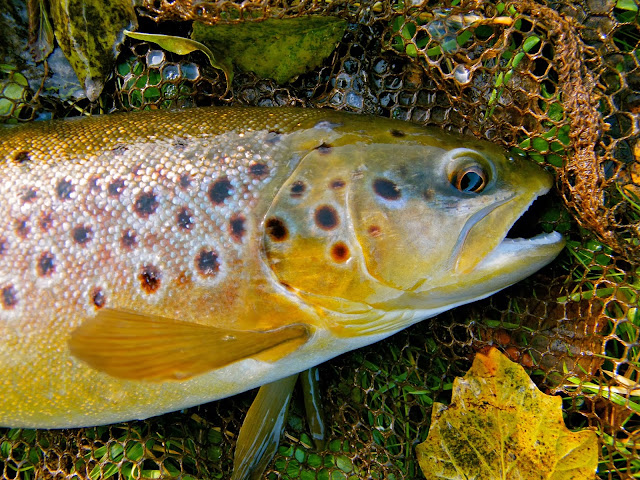 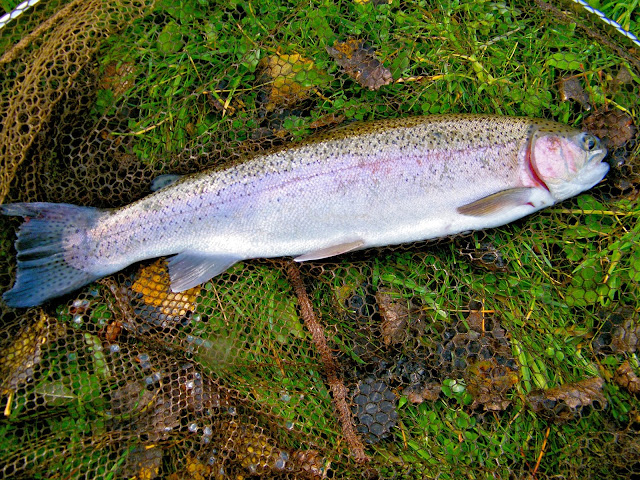 Plus I added another pb with this fish, 3lb 11oz. 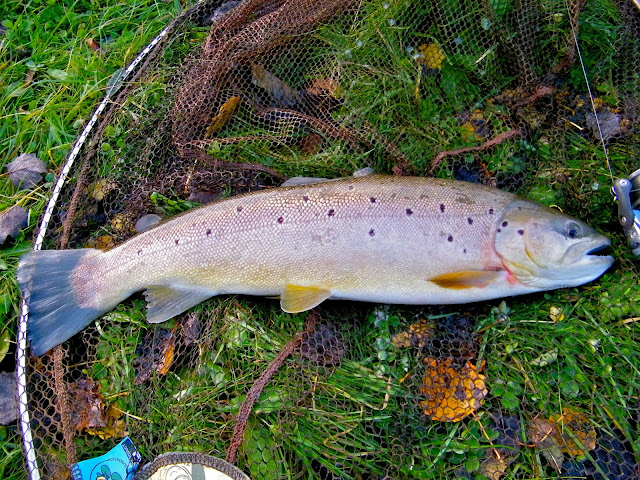 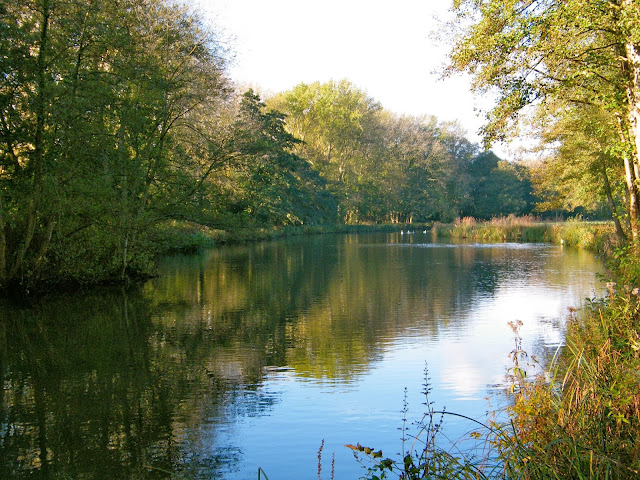 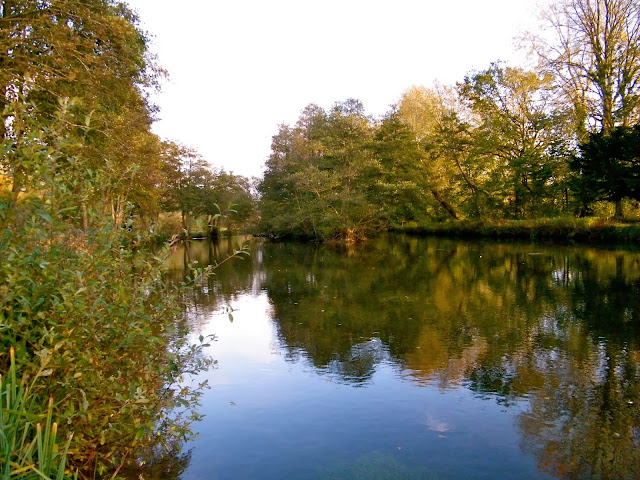 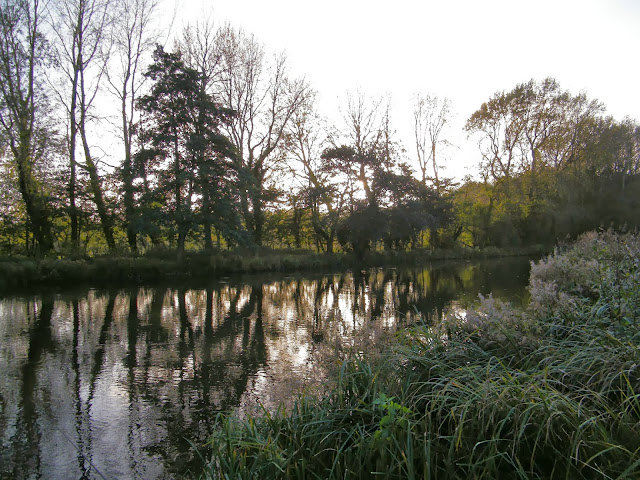 and the sun sets on a fantastic day.