Getting closer to a double. Tench, Hardwick 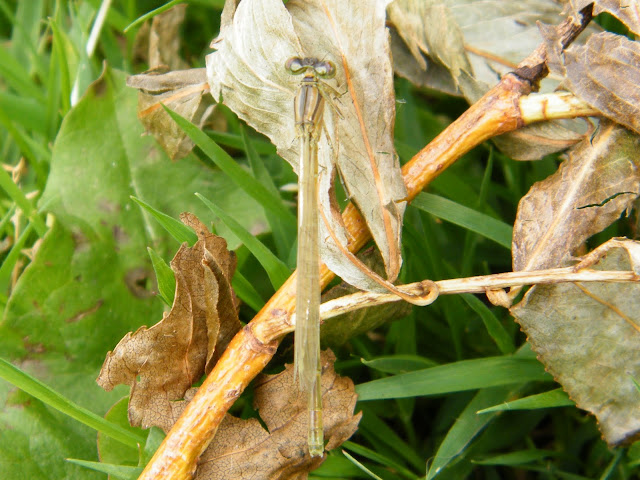 The insect life is all emerging showing us that summer is on it's way and the fish will soon be spawning and my opportunity for a ten pound Tench will have all but disappeared. Normally my enthusiasm for fishing for the same species week after week would have waned long ago but capturing a double figure Tench has become an obsession.
This weeks session I got closer but still no cigar. Cockney Steve and I headed back to the Linear complex for an overnighter on Hardwick. I landed 15 Tench in total, five over nine pound up to a biggest of 9lb 6oz. Steve had a nightmare with dropped runs, straightened hooks, weeded fish and snapped hook lengths. He gave up smoking this week and I think the fish were trying to test his resolve!
He did manage a pair though, weighing 7lb 11oz, both of them.

The last fish especially had the capacity to grow much bigger and therefore become a monster among Tench.
Next week I am landing that double. 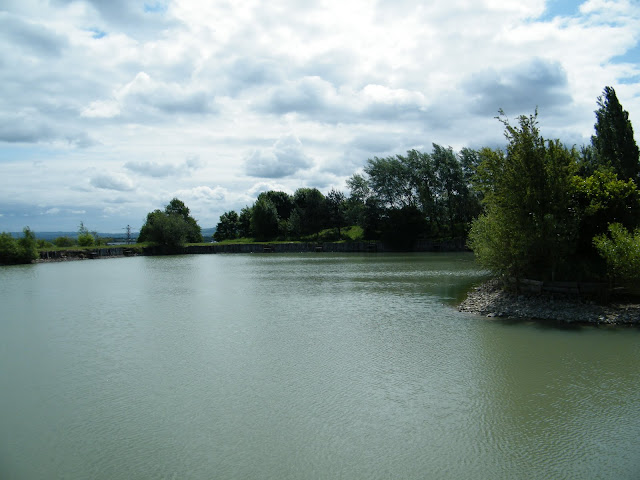 About six years ago I fished Twyford puddle and landed a couple of stunning Crucian Carp. I did not weigh them at the time and I have not caught one at any other time so they were personal bests but for some reason I did not take them seriously. Well, now I am. They count towards the challenge score board and also I want to add them to my pb list. Just got to catch one now. Probably easier said than done.
I arrived at Twyford early and had the pond to myself. I fished the same peg and tactics as my last Crucian success session and second cast I lost a fish to a hook pull. The wind then started to pick up and is exaggerated at Twyford due to it's elevated position which made the fishing difficult. 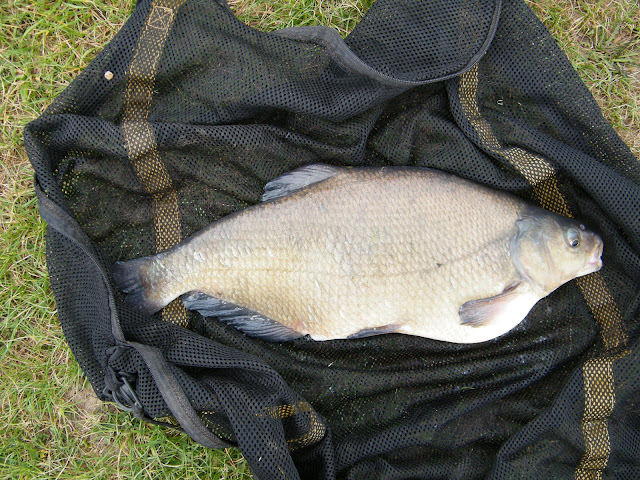 A few missed bites (could they be Crucian?) and finally I landed a fish, a small Bream. I followed this up with three other Bream to a biggest 4lb 9oz. A strange example of the species with it's distended belly, short tail and funny smell!
A change of bait and swim fishing close in under a bush using mashed bread and bread flake. This had been recommended by the local tackle shop owner and it got me out of the wind but still no Crucians. I tried this for a couple hours and went back to the other peg. An hour later I got into a bit of a tangle and decided enough was enough.
Posted by Joe Chatterton at 07:49 No comments:

Email ThisBlogThis!Share to TwitterShare to FacebookShare to Pinterest
Labels: Bream 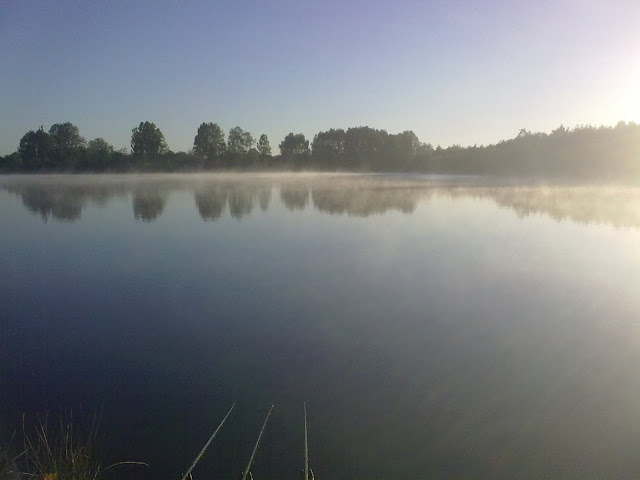 I never forget my camera when I go fishing. Sod's law states that the only time I do it was going to be a red letter session with a pb thrown in. I am leaving it at home every week now!
Me, my mate Cockney Steve and his mad dog Rebel headed down to Linear for an overnight session late Friday.  We arrived at 7.30pm and by 8.00pm I was fishing, Steve finally cast in his rods at 10.00pm, I have never seen anyone take so long to set everything up, probably had something to do with all the lager he was chugging.
It turned into one of those evenings when with good company you just talk and talk and before we knew it it was 2am and too much lager had been consumed. We turned in for the night.
I had three rods out, two on worm and boilies on the other and at 2.20am one of the worm ones had a screaming take. 10 minutes later and I landed a 17lb 4oz Mirror. I returned to my bivvy and managed to get some fitful sleep.
At 6.00am the far too chirpy Cockney woke me with a cheery 'come on geezer lets do some fishing'. I staggered from my sleeping bag and rebaited and cast out. Still in a bleary dozy state at 7.20am one of the worm rods signalled a slow take. I struck and it was fish on. The fight was very plodding and heavy, I thought it was carrying a load of weed but then about thirty yards out a big tail slapped the surface. I knew instantly this fish was a personal best shaker. I kept the fact to myself so as not to jinx anything. About ten yards further in it rolled on the surface and my southern gillie, waiting with the net told me it was a mother, that did not help my already nervous disposition. I prayed the size 12 hook held and the 8lb line did not break. They both did their job and as we peered into the net we both knew I had smashed my previous 22lb best. 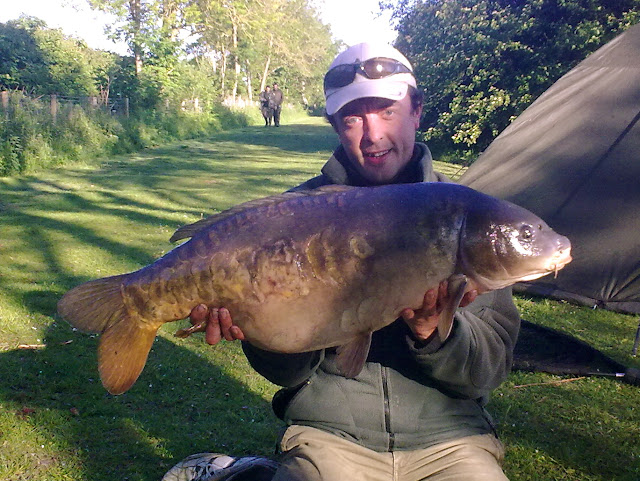 A 32lb 8oz Mirror was the prize and I was one jammy happy angler. My biggest ever English freshwater fish. 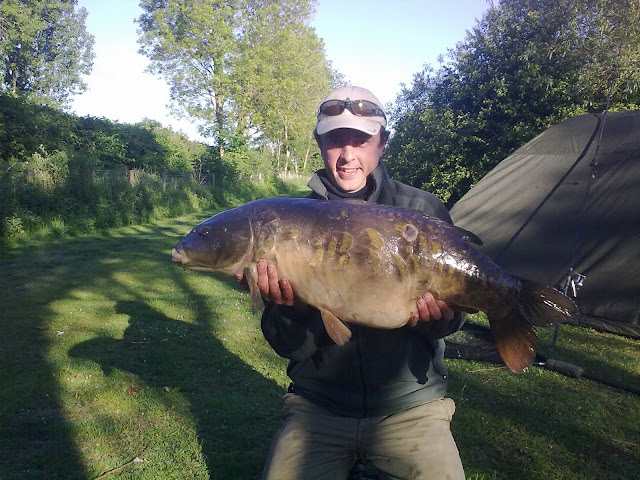 Steve with my mobile took some pretty good photos, otherwise the forgetting the camera scenario could have been a lot worse.
That was not the end of the fishing though, we had a full day of Tenching ahead of us and I landed 10 fish to a biggest of 9lb exactly, Steve chipped in with a couple of Tench too. 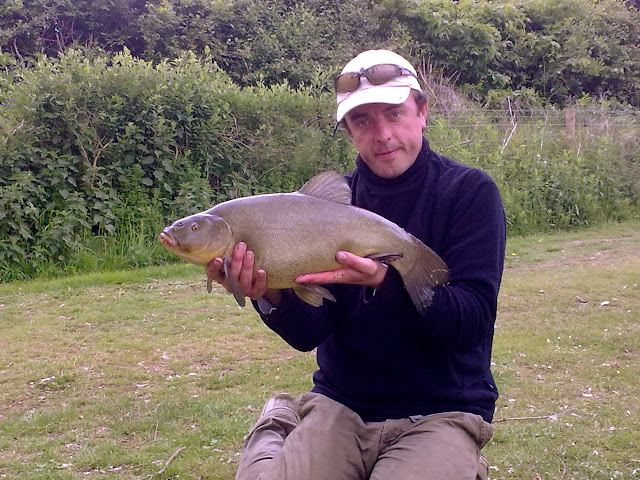 A proper red letter day, over 120lb of fish and a new pb, itching to get out there again!
Posted by Joe Chatterton at 12:23 3 comments: 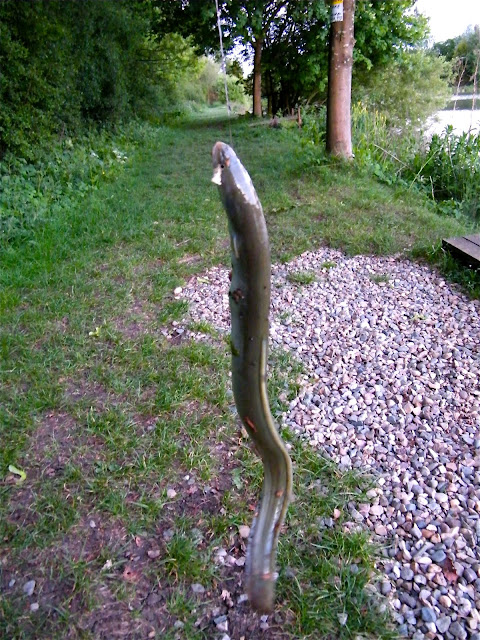 I confess that Eels are not my favourite species but there is something different and therefore exciting about them and I enjoy the idea of setting out trying to catch them. A couple of years ago I landed a 2lber from Coppice pool so I headed there for a short evening reccy session. I had intended on getting some dead baits out the freezer and using them as bait but forgot so two tubs of Lobworms from the fishing shop had to suffice.
I got there about a half hour before sunset and set up low resistance 'John Sidley' rigs on both rods. A short flick into the margins as close as I dare to over hanging bushes and all was set. Twenty minutes of peace ensued until suddenly both rods set off at speed! Talk about buses!
I hit the left one and felt nothing so dropped it and struck the right rod and felt resistance. I could not believe it Eel in the net and not even dark yet.
I weighed it at 12oz, took this crap photo and put it back. I am not afraid of an Eely self take trophy shot but this was not big enough to get slimed and smelly for!
I rebaited and chucked back in for what I thought was going to be an easy and busy session but it turned into frustration, typical fishing!
Regular bites and chewed worms but thin air strikes. Most likely a mixture of Eels and silver fish and a lot of food for thought. Back next week for another attempt.
Posted by Joe Chatterton at 21:10 3 comments:

Email ThisBlogThis!Share to TwitterShare to FacebookShare to Pinterest
Labels: Eel

The Tench are putting on weight. 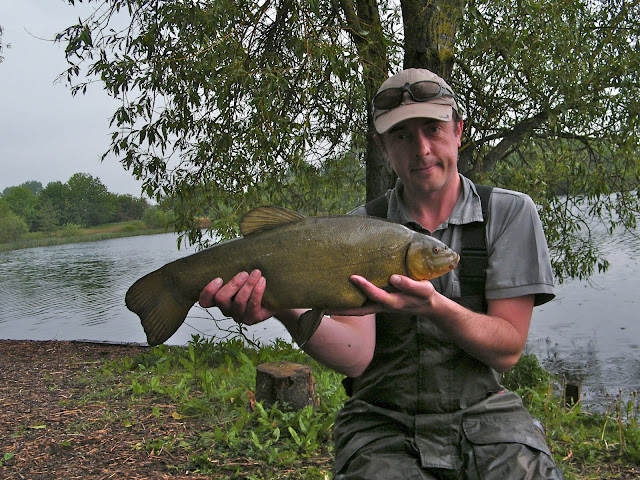 8lb 13oz
My blog is getting a bit monotonous but I make no apologies for being determined to get the bigger Tench. I am desperate for a double and have been for a couple of years since catching a 9lb 13oz specimen. We are at the time of year when they pack on the weight and the above fish was the largest of the session weighing 8lb 13oz. It was one of eleven fish totalling a combined weight of over 70lb. Three eights, four sevens, a six and three fives, a quality days fishing in very changeable weather. This was my first ever day session where I have put a bivvy up but felt it necessary due to the forecast of thunder storms, wind and rain. In the end it turned out fine but not until I had had a thorough soaking.
I should move on to different species but maybe just one more session for the Tincas, will decide in the week. 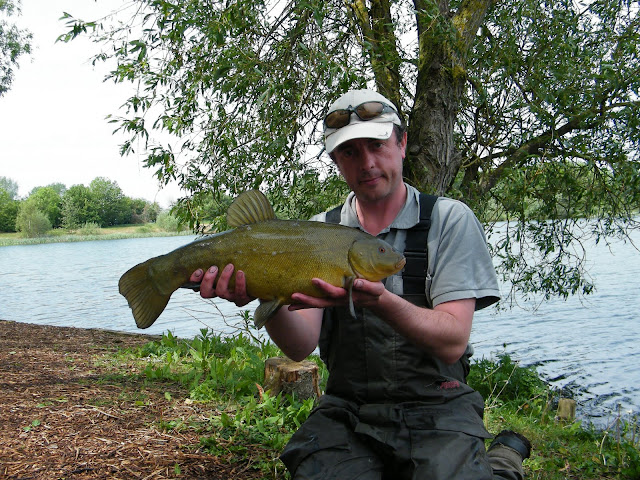 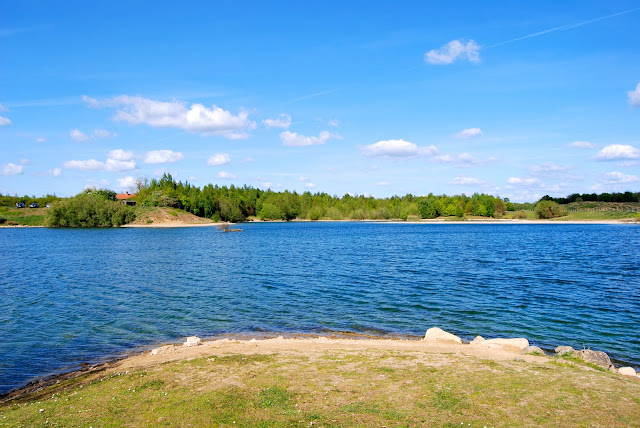 I took the whole family to Yorkshire to visit my mum and dad for a few days but still managed to get out on the bank for a session. With the car rammed full of clothes, pushchair, toys, high chair etc the space was limited for angling gear so decided to use the opportunity to travel really light and fly fishing is ideal for just that. My fly rod is a four piece travel rod and a bag containing a reel, my fly box and net left plenty of room for the children's paraphenalia.
My Uncle Ken also resides in God's county and is a very keen fluff chucker so I called on him to use his local knowledge to choose a suitable spot to fish and knew he would join me for the day.
He said to meet him at Bellflask fishery, about 10 miles from my old folk's place, at 7.45am. I arrived at 7.35am and he was already there, tackled up and raring to go.
Bellflask is a stunning old gravel pit which is situated alongside the upper reaches of the river Ure and I had to have peak over at the river, I couldn't resist as it is the river I learned to fish first, but further down stream where the Barbel and Chub are more prominent. It looked stunning but sadly the stretch is private.
It was a typical Yorkshire summers day, blowing a gale, and being an inexperienced fly angler I opted for a sheltered spot with the breeze behind me. I find casting difficult enough without the wind flying across me at any angle. I struggled through the morning but had scant consolation as so did the other more experienced anglers. At around 11.30am hope was renewed as Uncle Ken hooked and landed a monster Brown Trout which we guessed at around 6lb. A stunning fish that we were allowed to take home but we followed the unwritten code of the Brownies and unhooked her and let her swim off, on Ken's instruction. I agreed it is the done thing.
An hour later and Ken moved swim so I jumped in to his and promptly landed a Rainbow of 2lb 7oz. I had changed to a bluebottle type looking fly and straight away next cast I landed a 2lb 12oz Blue Trout, my first ever so a pb, also my biggest ever Trout. They put up brilliant scraps on my light 5 weight fly rod. 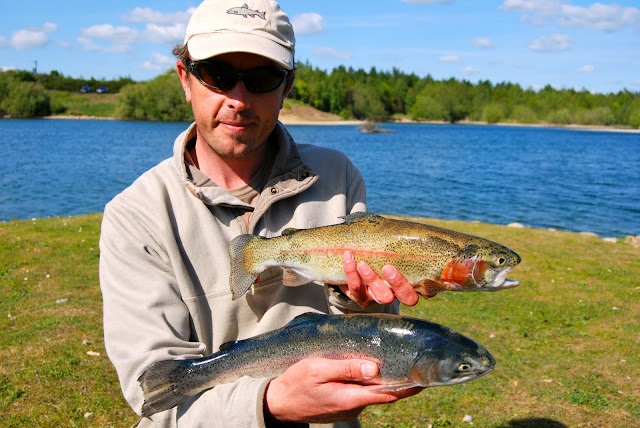 I could relax now and though I soldiered on with the same fly nothing else was interested in it so I swapped about both flies and swims. Nothing else worked but I did not care. The bag limit is four but if I had caught more they would have been released, these two were ample and perfect for a forthcoming BBQ. My son Max seemed impressed with them too when I showed him later, his sister wasn't! 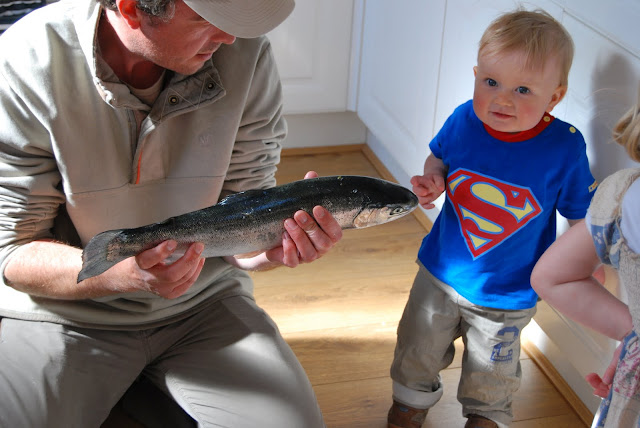 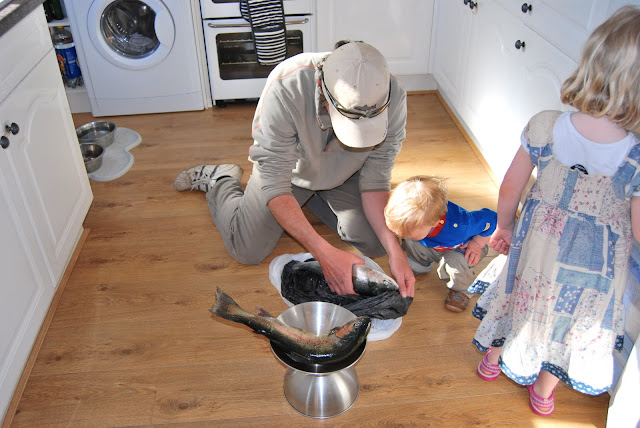