It's Lovely Down South 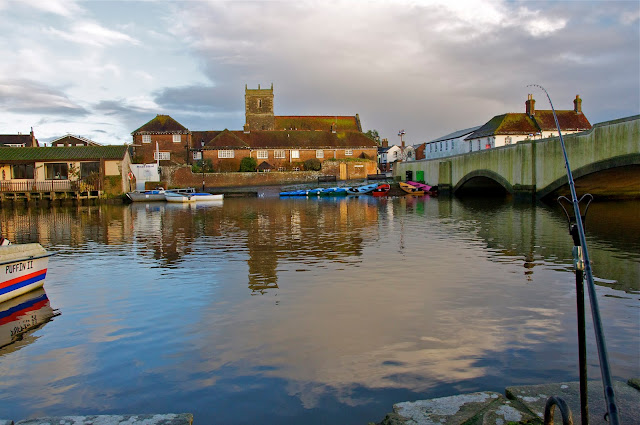 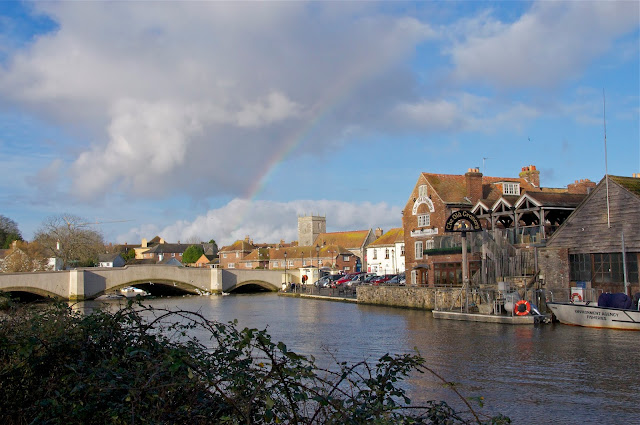 With the amount of water around at the moment and hurricane Frank violently battering us,(it took the roof off the kid's playhouse this afternoon-another job for the New Year!) it was amazing that yesterday we were treated to bright blue skies and some sorely missed sunshine. We had to head way down south to find it though.
Our target was Roach and Dace, not the incessant procession of Trout that found our maggots irresistible. 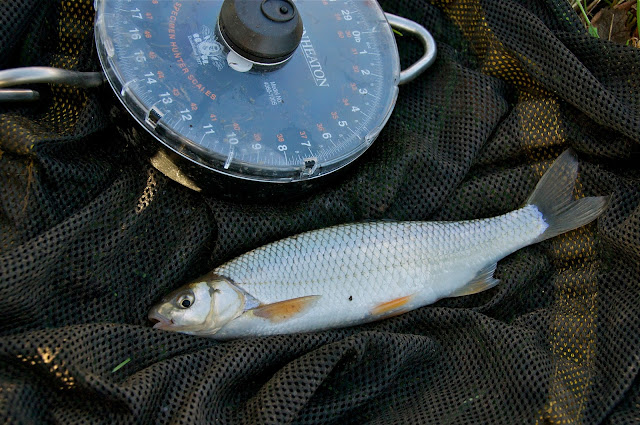 By moving about the river I did find some Dace up to 8oz which were good fun but the Roach were nowhere to be seen. 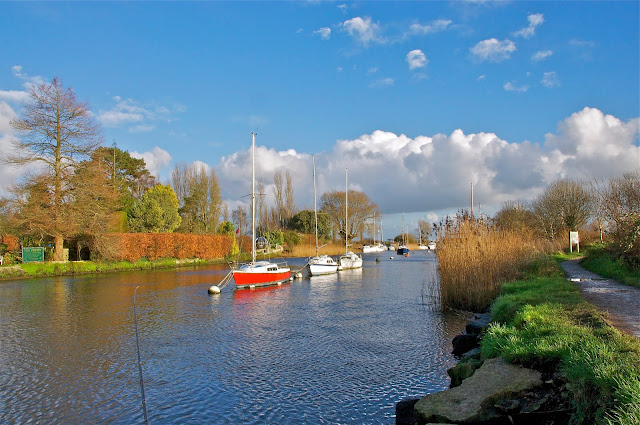 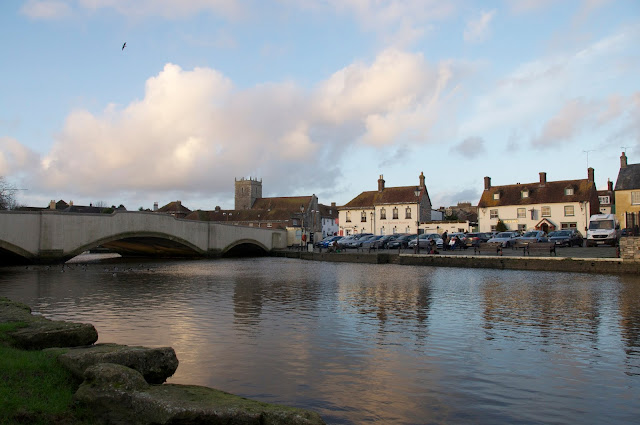 We carried on into darkness in the vain hope that they might show but they continued to elude us. Scant reward for a tough round trip of over six hours but that won't deter us from returning. 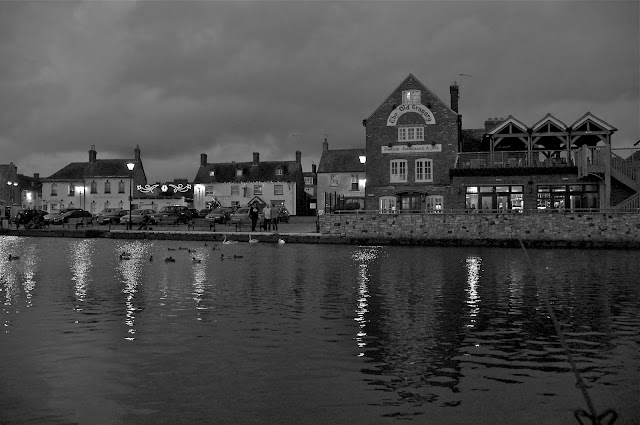 Posted by Joe Chatterton at 16:57 2 comments: Links to this post

The Avon and the Car: Update 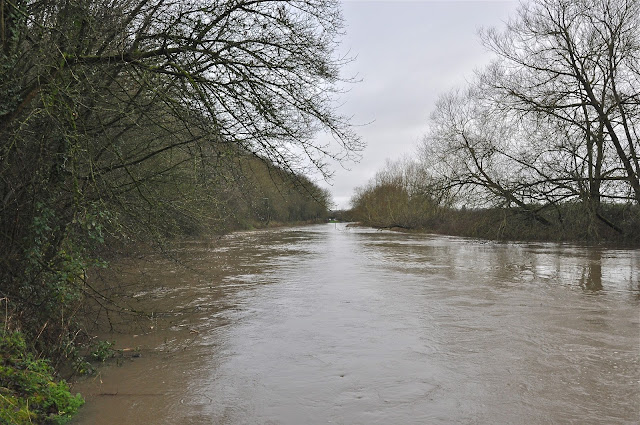 I half-heartedly cast a line yesterday into a rapidly rising Warwickshire Avon. Thankfully it doesn't look likely to break its banks this time unlike virtually every river in the north of England. My heart goes out to those unfortunate folk who will have a pretty miserable start to 2016. 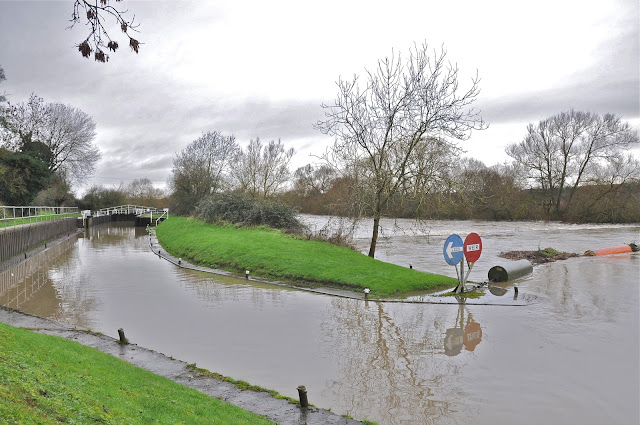 I didn't expect much action but I wasn't there to empty the place, just an excuse to get out and walk the dog really. 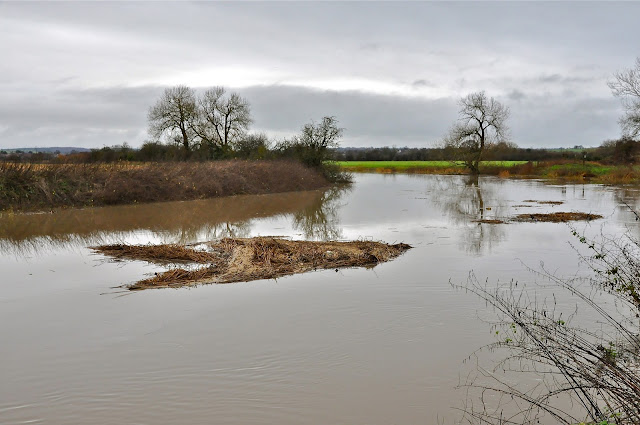 The amount of crap being washed downstream was amazing but made the fishing doubly difficult. On the plus side when the water does recede the river bed will be a lot clearer.

Car update: It is still there but probably not for much longer if the river keeps rising. Latest word bank-side is that someone lent it to their friend and the chap that abandoned it has not been seen since! It is not fully insured, only third party and the owner hasn't got any money so cannot get it retrieved. Both the police and environment agency were informed over eight weeks ago. The Avon Navigation Trust won't do anything about it but My betting is that will change when it slides into the river and is sat right in the boat lane entrance to the lock.

Posted by Joe Chatterton at 13:33 4 comments: Links to this post

The initial intention was to fish for Barbel and I set up in the same swim as last week. Conditions looked great, the river was about a foot above normal, had a nice colour to it and the temperature of late has been exceptionally mild for the time of year. Feel a 'but' coming along? As is often the case the Barbel hadn't read the script. After over an hour with no activity, not even a slight twitch I decided a change of tack was required.
I like to always have a plan B in place as my fishing time is precious and never to be wasted. I grabbed some cheese paste and a pack of Roach dead baits and wandered down below the weir. Dead bait in the margin, cheese out in the flow and finally got some action. A brace of Chub landed both around the three and a half pound mark. Cracking battles in the snaggy swim.
Only one bite to the dead baits but a really pleasing stunning Pike of 11lb 3oz. The move was well worth it. 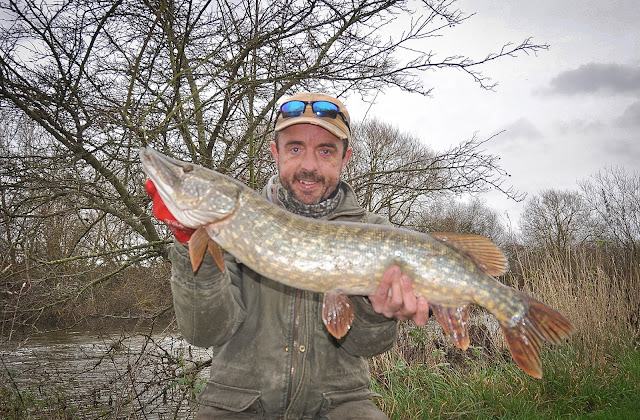 Struggled to get the focus right on the self-take but rescued what I could on the computer.
The car is still there and getting closer to the river!!
Posted by Joe Chatterton at 13:09 1 comment: Links to this post

When I made my first cast this morning there was more hope than expectation. Over night temperatures were hovering around 5 degrees centigrade and the river level was on the rise. I decided to play it safe fishing two rods, a 'sleeping' Pike bait chucked along the margin and maggot feeder deployed towards the far bank willows. I settled back preparing to build a swim hoping to nail a few Roach, Dace and maybe the odd bonus.
My coffee flew everywhere when the rod tip almost immediately jumped in the rest, bent down towards the water and just kept on going in a manner that could only be produced by an angry Barbel.  The anti reverse was clicked off just in time to allow the fish some line and the battle commenced. What was obviously a reasonable fish used the strong flow to its full advantage and the 3lb hook-link rendered me fairly helpless to do anything but hang on. Gently and carefully I coaxed the fish back upstream and with an aching arm I breathed a sigh of relief as it slid into the net. A short immaculate specimen that was as fat as butter. Curiosity got the better of me and I put it on the scales, 8lb 6oz.

I thought to myself that it was a one off and so stuck with the light hook-link and size 16 hook but it turned out to be a mistake. It didn't take long before another Barbel was hooked but this time the fish found a snag and with it its freedom.
Hint taken I tied on a new hook but this time using eight pound line. Surprisingly the Barbel were really having it and in no time at all I was attached to another. With more power at my disposal the battle was short-lived and soon enough I was slipping the net under another fat Barbel, this time weighing in at 9lb 6oz.

Normally I would have made the effort to take a decent photo but with a sloppy sliding bank side and a dodgy knee I settled for another 'net' shot rather than risking more damage to my painful joint.
Having never caught a Barbel in December before (I don't see the point in trying) I was made up with the mornings fishing so far. It didn't last though and following a quiet spell the maggot bait was swapped for cheese paste. The air temperature had noticeably fallen and felt much more 'Chubby'. The change of tack worked and a brace of Chub were landed, weirdly both weighed exactly the same, 3lb 12oz. 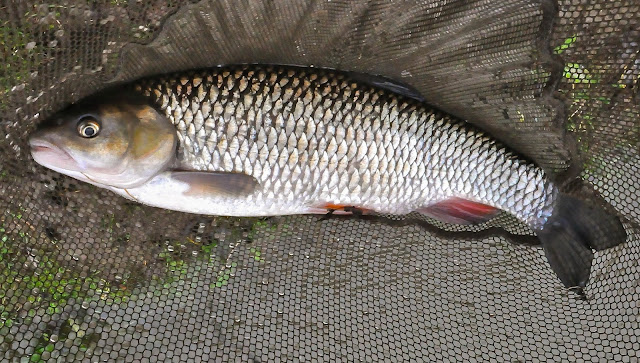 In between I also managed to land a small Jack Pike to round off a pretty good Winters day by the river.
Posted by Joe Chatterton at 22:22 2 comments: Links to this post 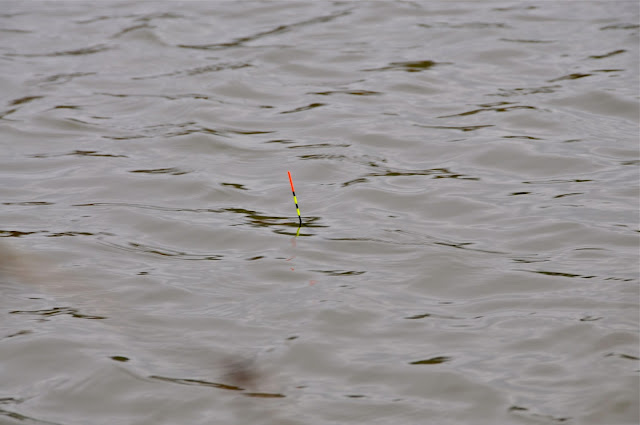 The conditions were perfect for a days Perch fishing, little windier than I would have liked but dull and overcast for the whole day. 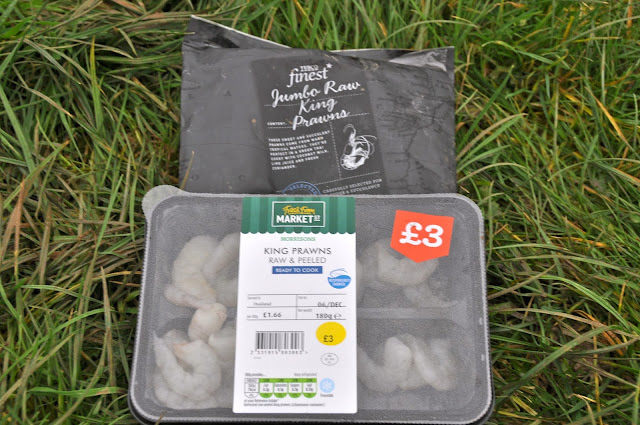 Armed with plenty of prawns I headed to one of my favourite commercial puddles and deployed the bait under super-sensitive floats. The first couple of hours were frustrating to say the least as the floats dipped and rose, Any strikes were met with fresh air. I thought the culprits were small fish nibbling at the large bait until eventually I swung in an angry little crayfish with a lump of Prawn in its mouth and a size eight hook in its leg. 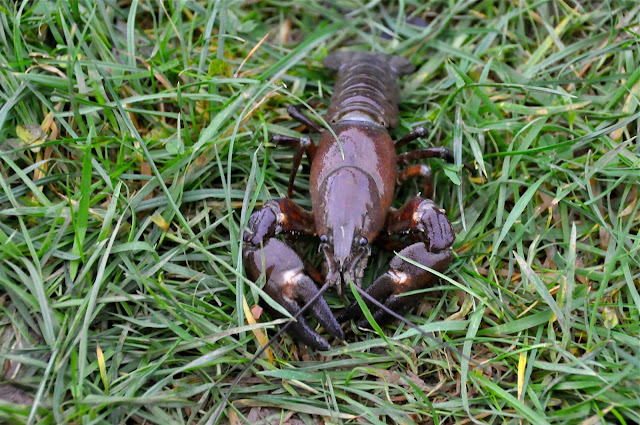 All morning I had been using Tesco finest prawns and didn't have a fish to show for them. I changed to Morrisons fresh farm prawns and had an instant result. Strange that the fish had a definite preference or was it that they just switched on at that exact time?
Sadly not the Perch that I craved but at least the rod had had a bend in it from a pretty little F1. 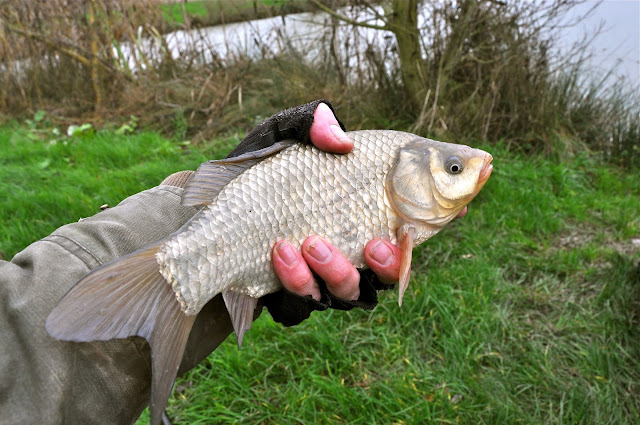 Almost instantly another Carp fell for the bait, this time a Common. 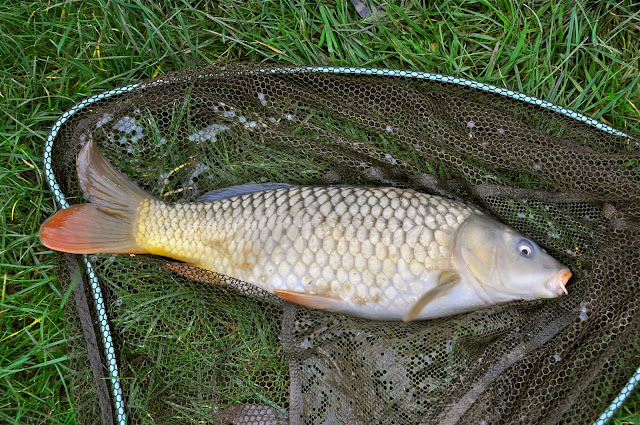 Then finally the target species showed up, the first of four landed in total and the first one ended up being the biggest, weighing two pound on the nose. A decent fish but they grow a lot bigger in there. 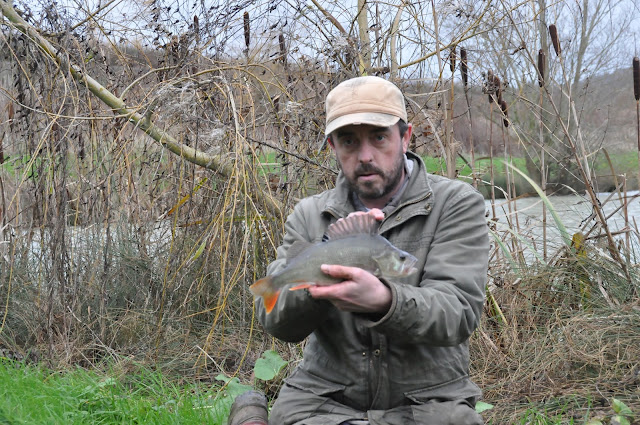 I lost count of the number of Carp that gate-crashed the party, they were good fun on light tackle though. 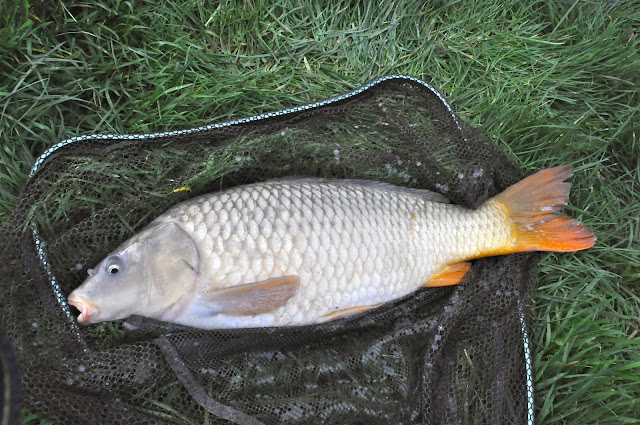 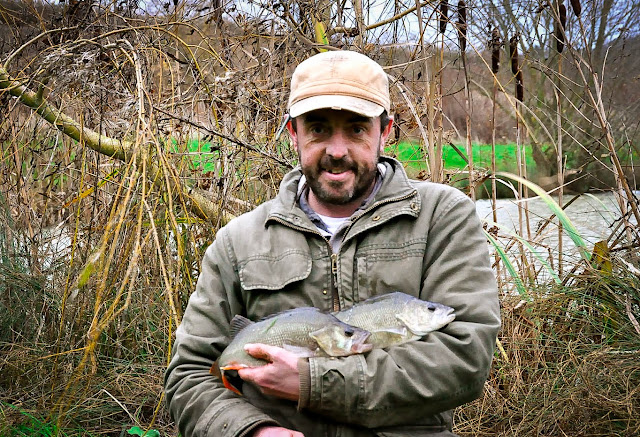 Not an easy self take!! 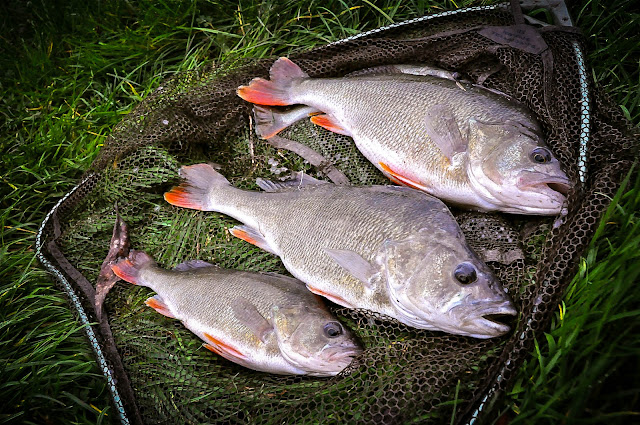 Tazzy got bored and proved that she is crap at hide and seek. 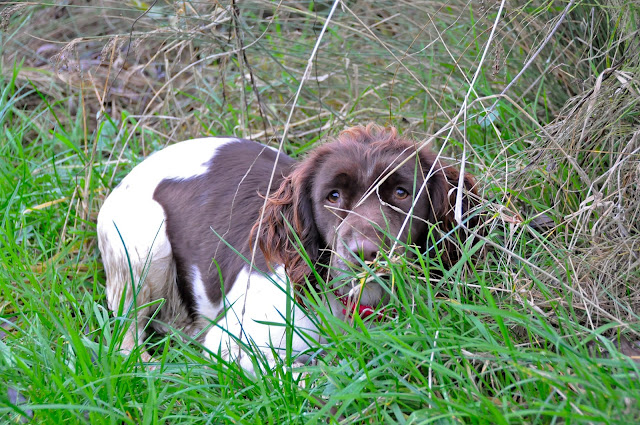 Posted by Joe Chatterton at 21:48 3 comments: Links to this post