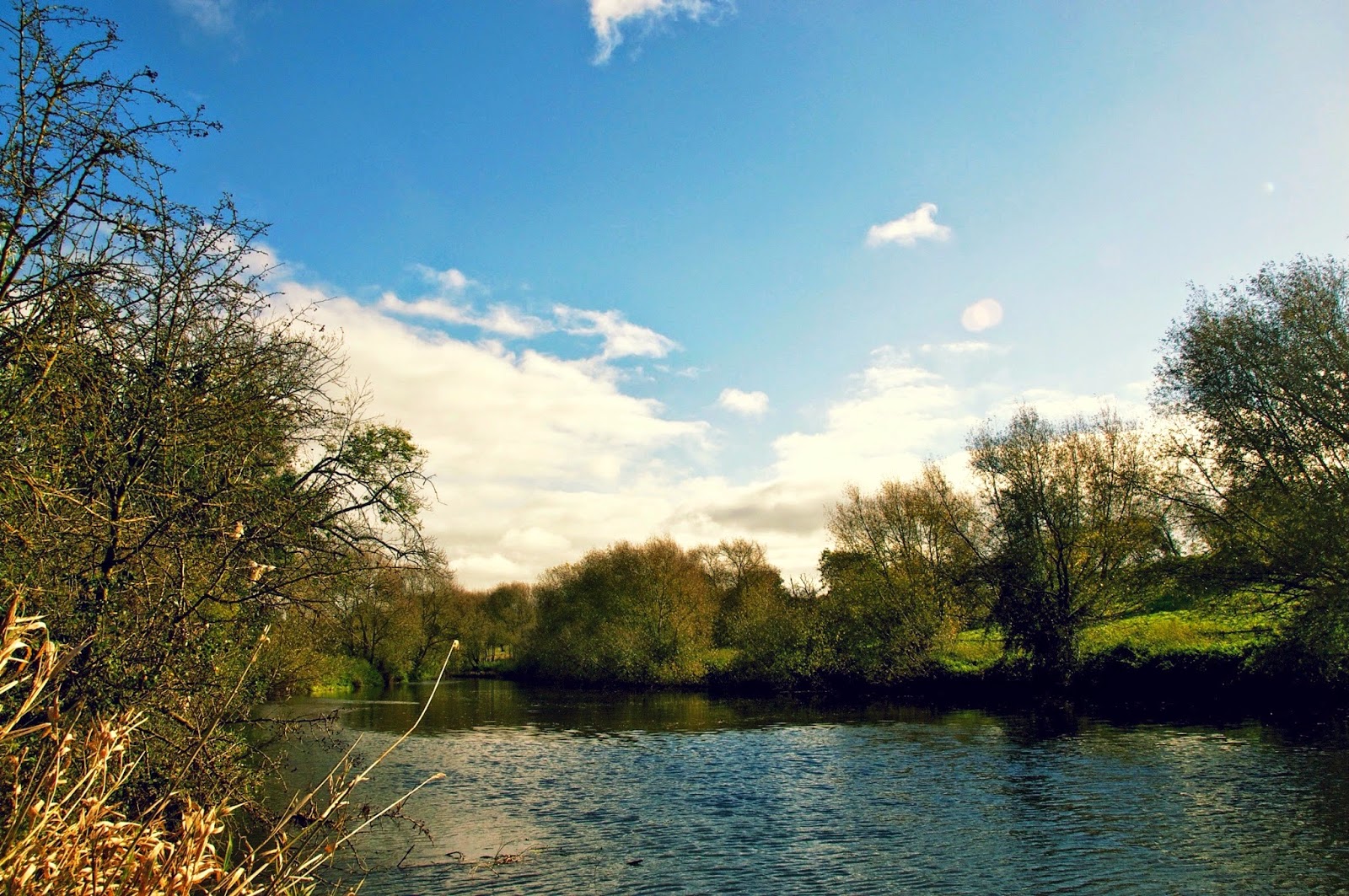 Three weeks since I last wet a line so I was itching to get to the river. Although the weather is still decidedly autumnal I wanted to begin my Pike campaign early especially with a sojourn to the Wye coming up in a fortnight. The weather was not ideal with bright skies and beautiful sunshine but the recent flush of rain gave me some much needed confidence. It didn't take long until the first Pike snaffled my Roach deadbait, a small Jack of about five pound. It still had it's warm water vibrancy as it thrashed and tail walked around the swim leading me a merry song and dance. An enjoyable fight. 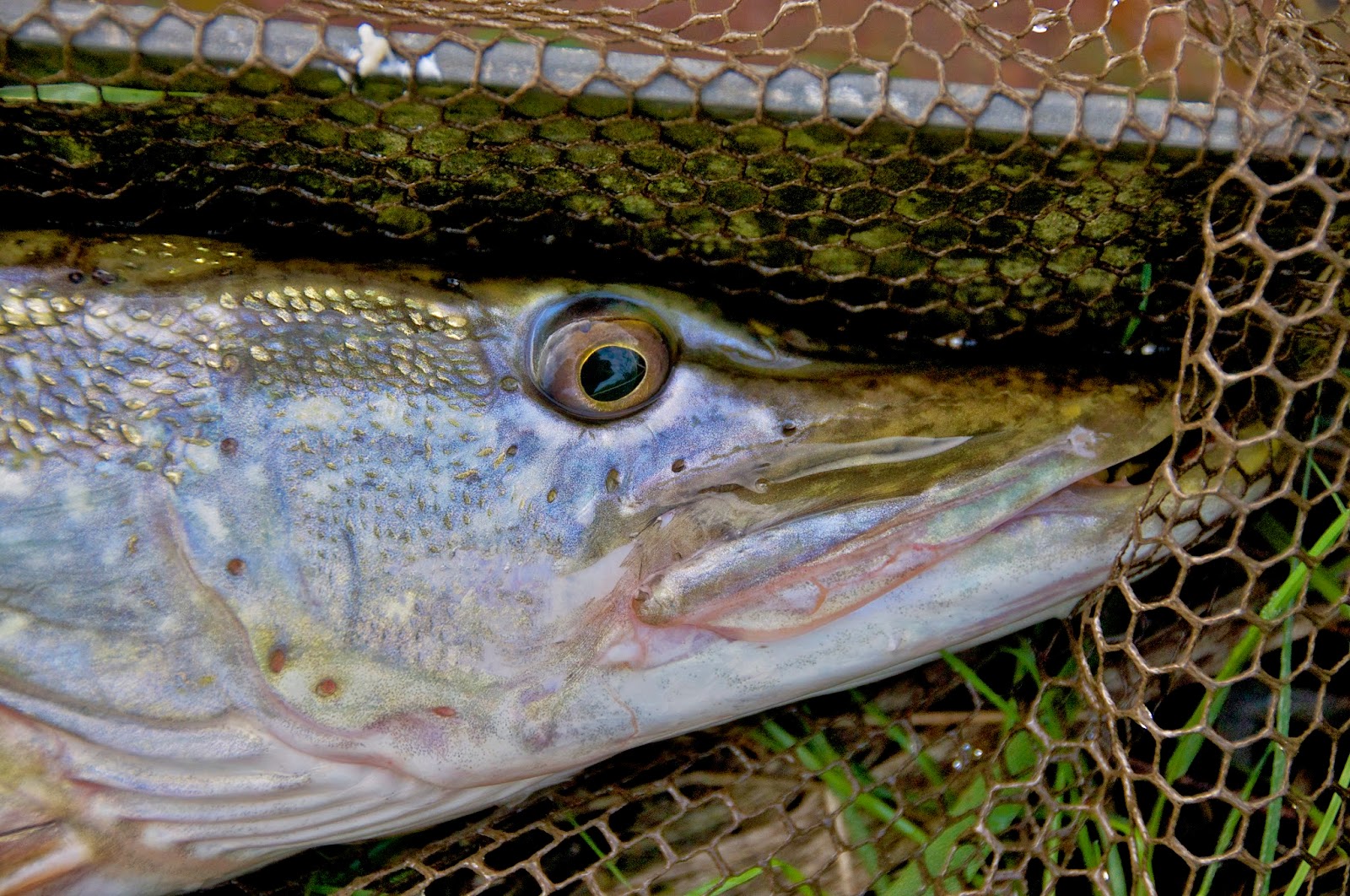 Tactics were pretty simple, a small Roach deadbait, a single size Six hook impaled ust above the dorsal fin attached to a part-cocked loafer float. Resistance must be avoided as much as possible when predator fishing otherwise the fish will drop the bait and this rig is very light. Seems to work well for me. 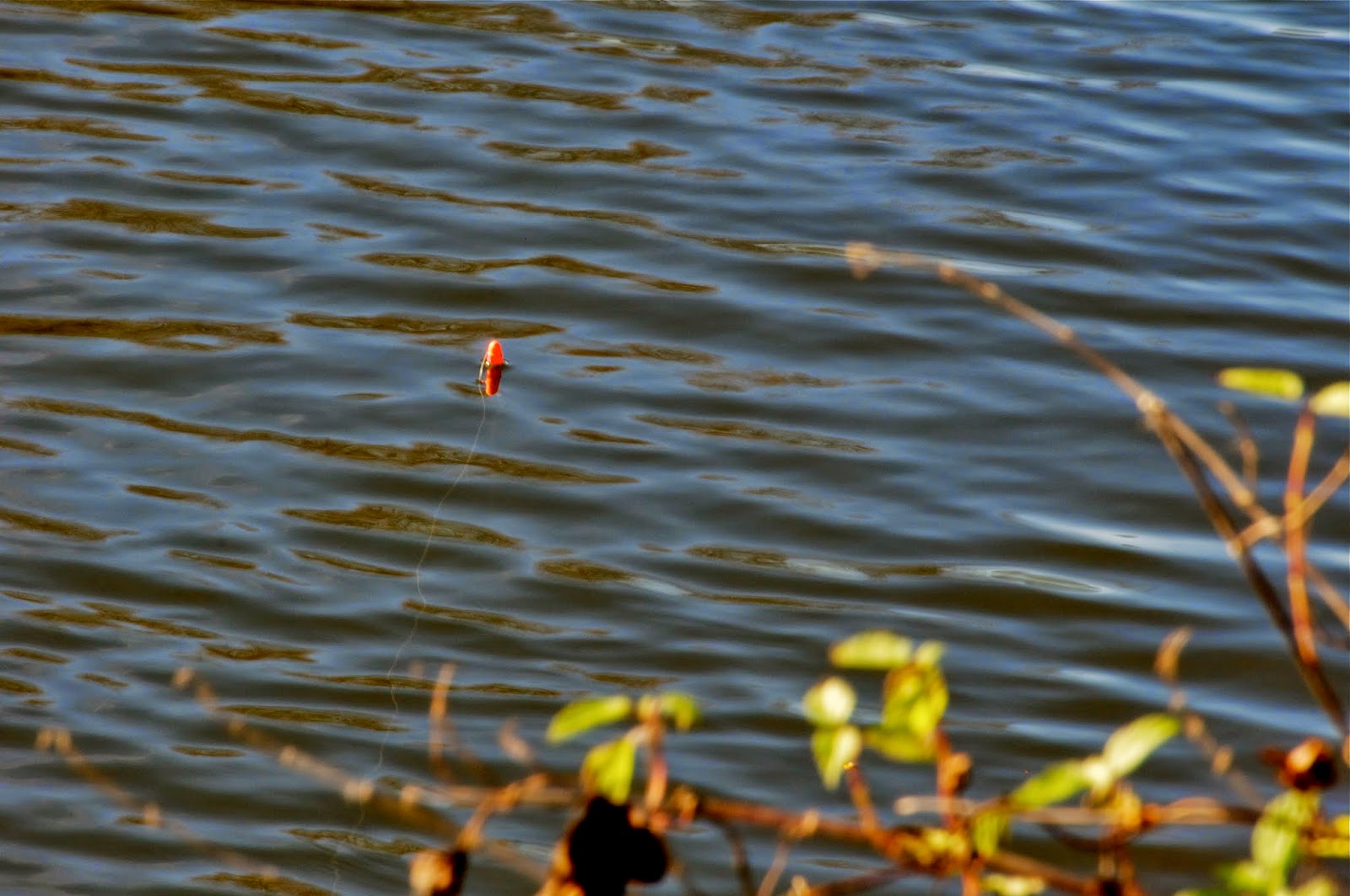 It wasn't long before the float twitched and went for a wander followed by that lovely feeling of resistance when I struck into the second Pike of the day. The initial stages of this fight were considerably different to the previous. The fish was much more deliberate and I knew I was attached to something substantial. My first sight of the fish revealed more than just it's size, I could see the hook in the corner of it's mouth and the hold it had there looked extremely flimsy. The enjoyment of the fight immediately disappeared replaced by nervous tension and as it thrashed and made powerful runs around the swim all I could do was pray. Thankfully those prayers were answered and I ended up slipping the net under a stunning double figure Pike. 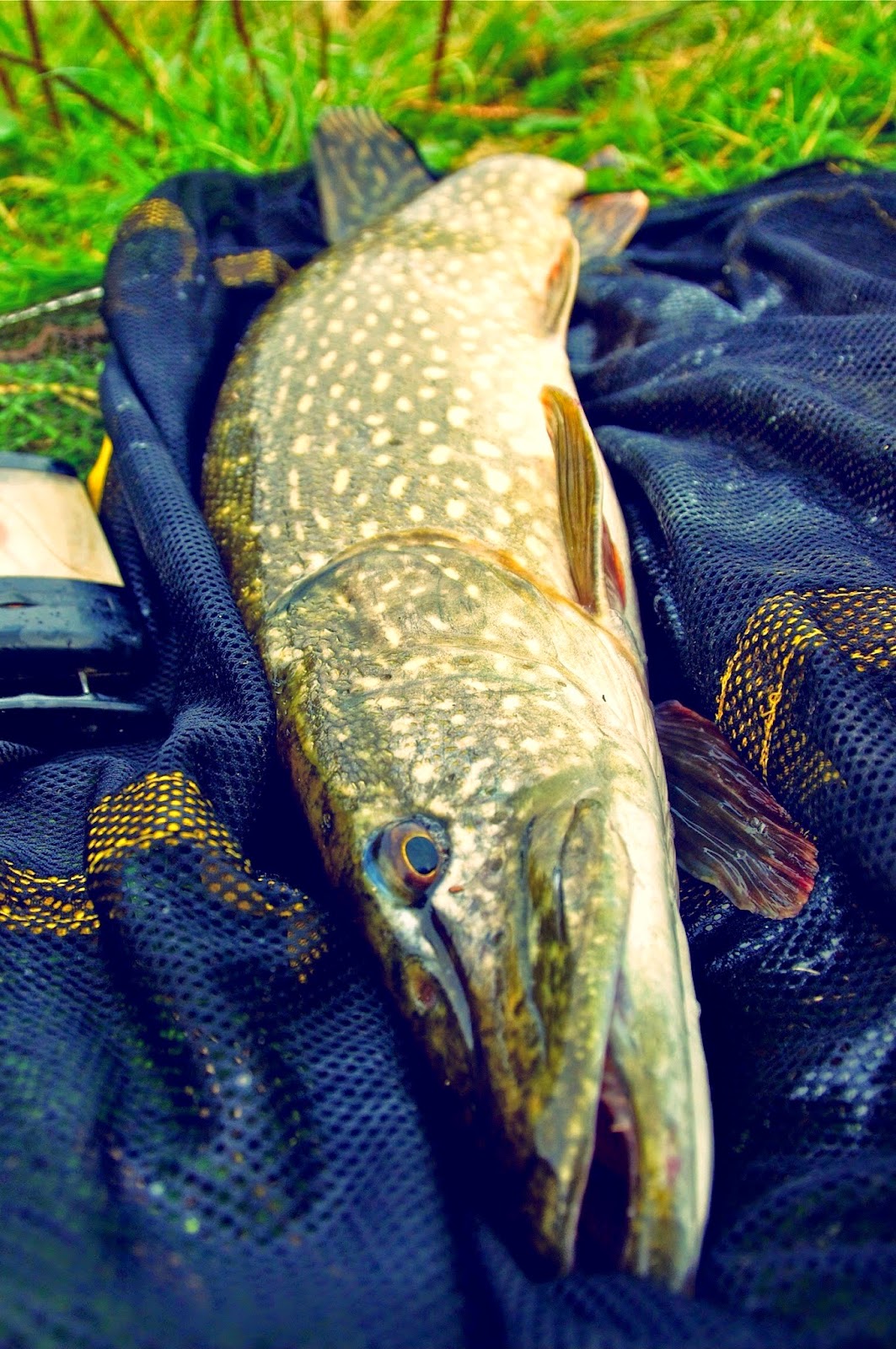 Not a long fish but immaculate and as fat as butter weighing in at 11lb 2oz.

Another Jack snaffled the bait soon after, a hat trick of Pike from the same swim in only a few hours. 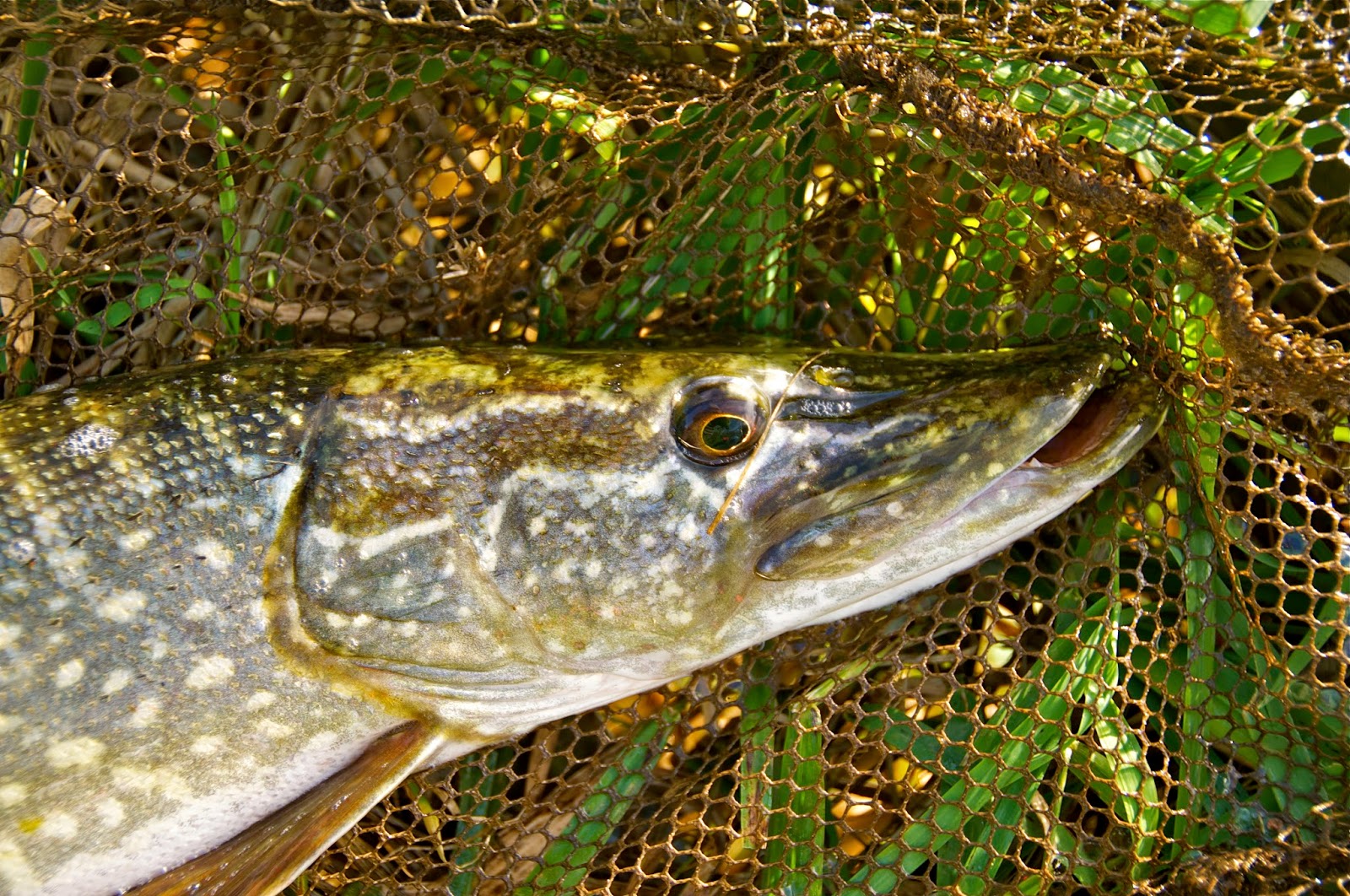 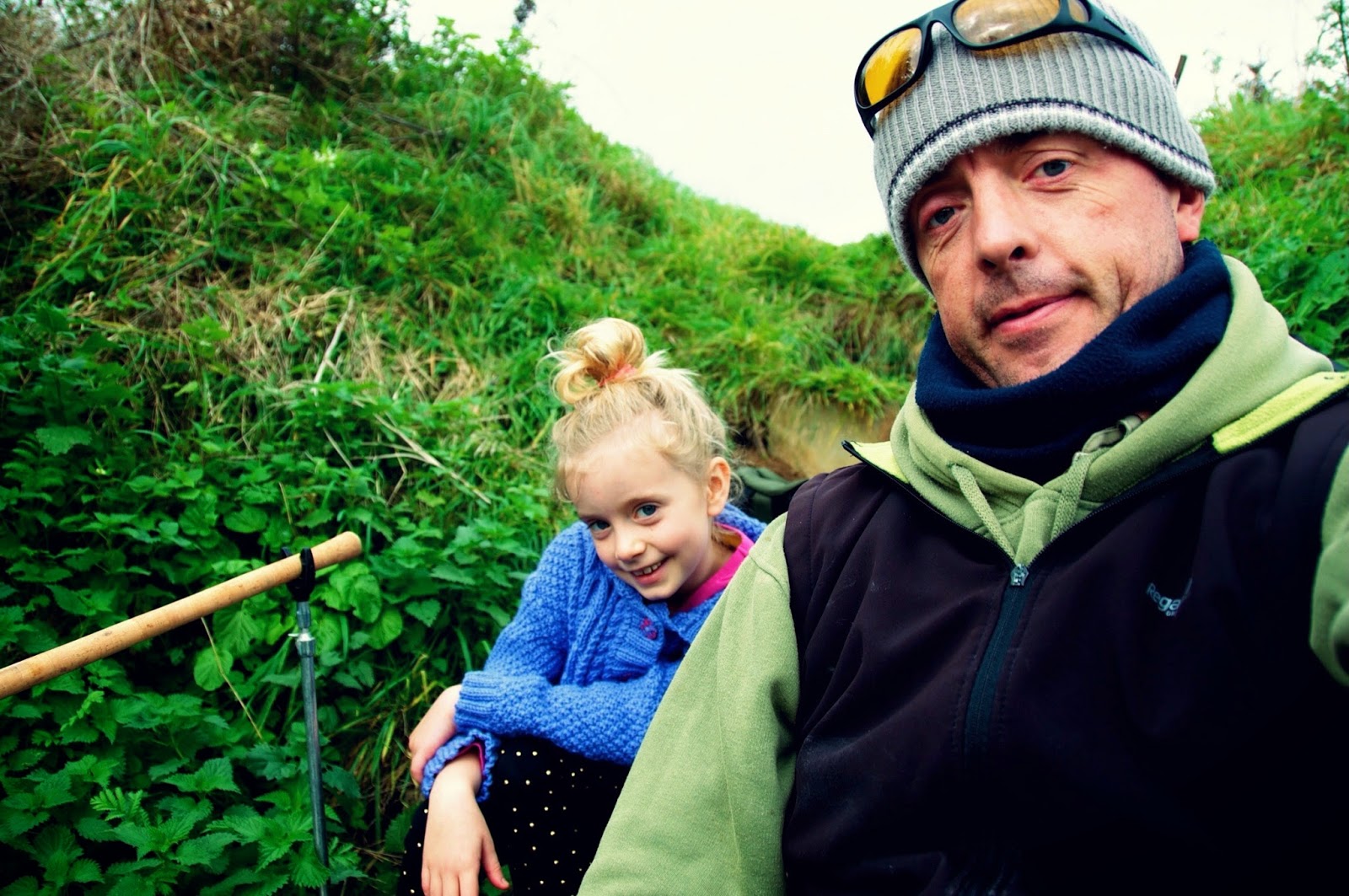 My eldest daughter, Maisie joined me mid-afternoon and whilst I still fished on for Pike I realised that her patience would not last as long as mine so a maggot swimfeeder was chucked out and we had fun  messing about with Perch and Roach. Her favourite fish is now Roach because 'they are beautiful' and she would like a couple as pets! 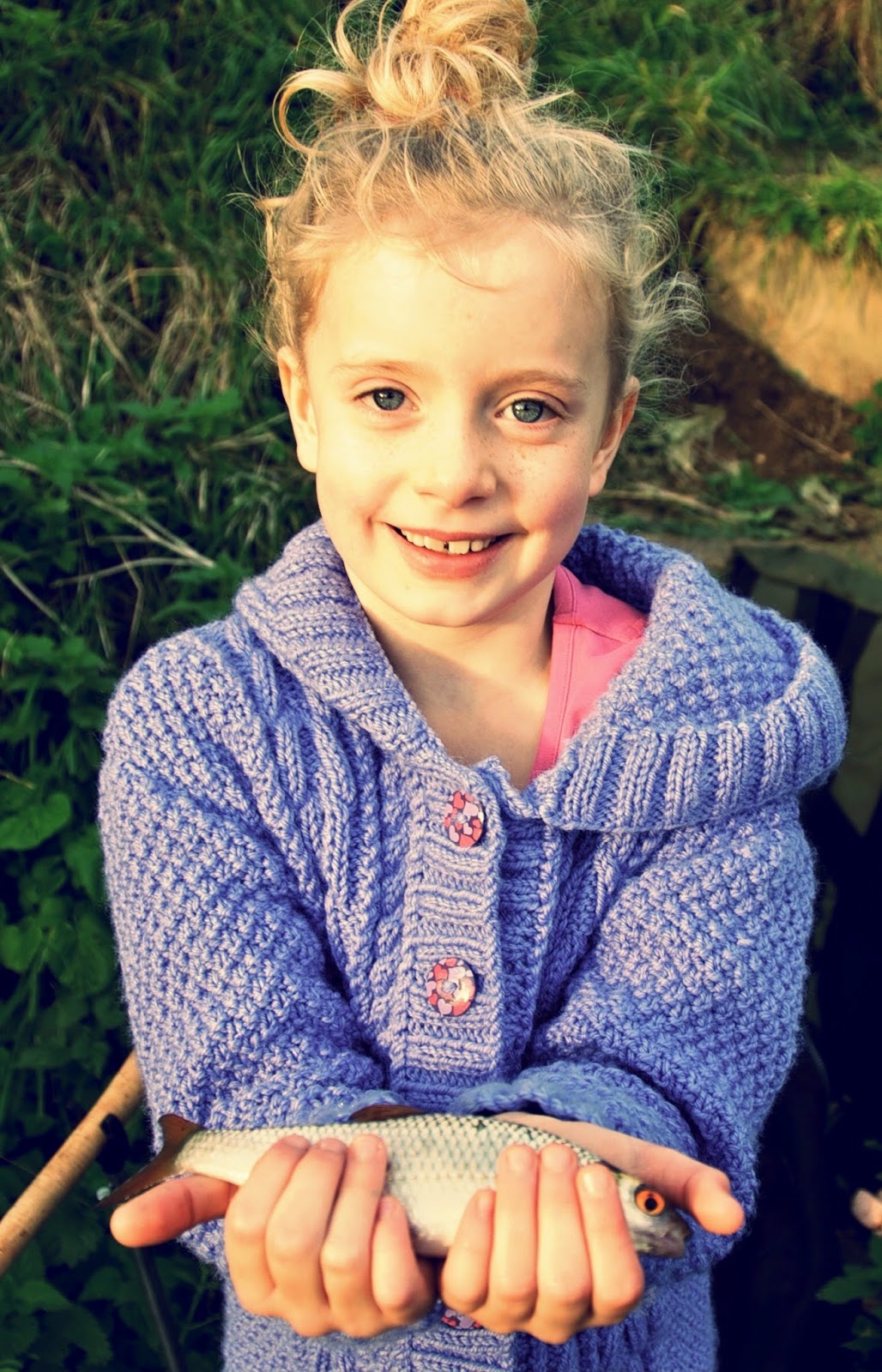 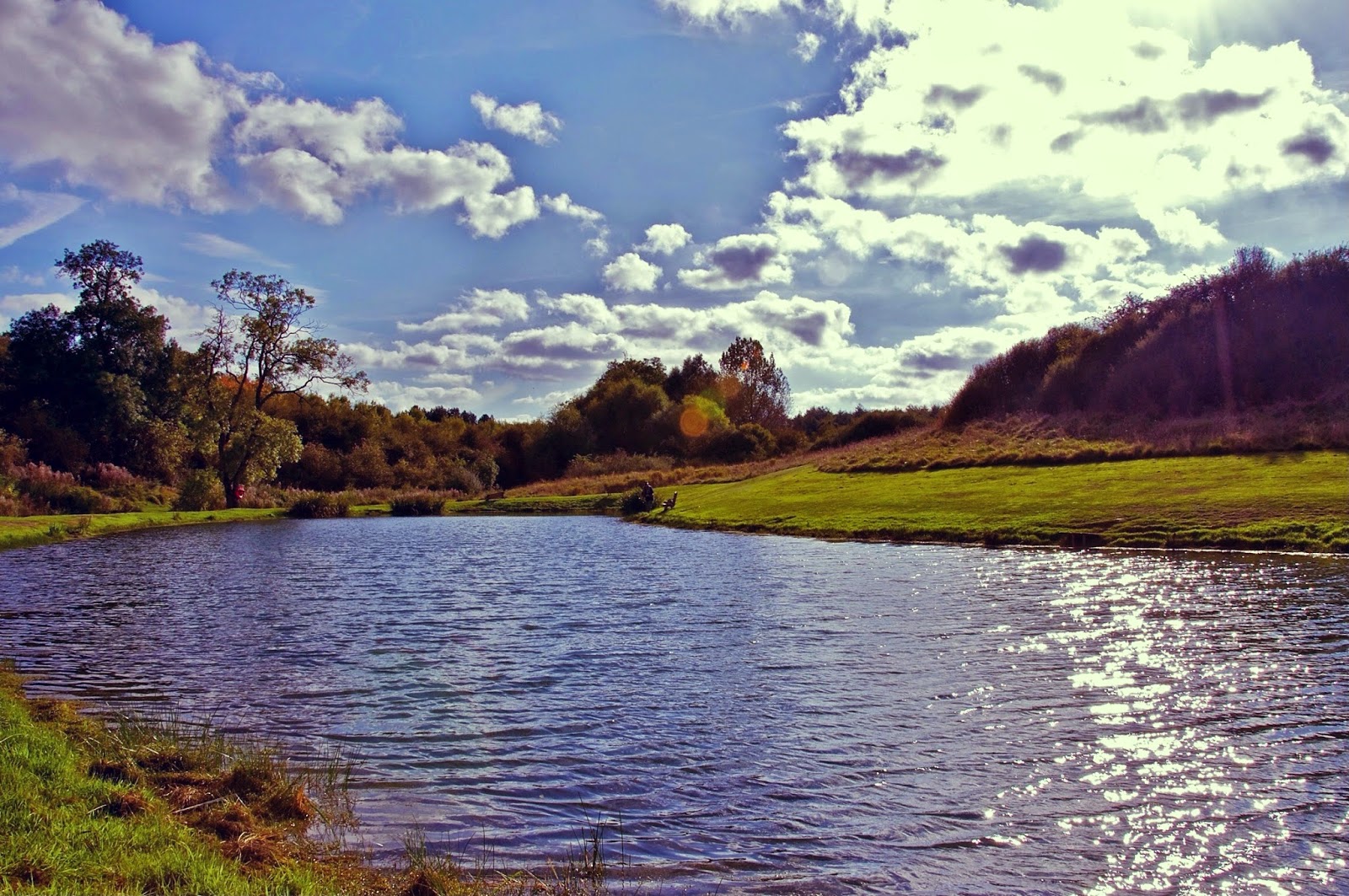 'I'm sure Izaak Walton would approve of pig-sticking a pellet fed farmed Salmon on a Dog Nobbler, sounds like fun' came the text message. 'Not one for the purist' I replied, but surely fun and enjoyment are what fishing should be all about. So there we had it, it was booked. Nick and I on our annual fly fishing trip were off to Palm Springs, a little puddle in the Leicestershire countryside stocked with farm bred Salmon. Neither of us have ever landed a Salmon before wild or manufactured and these fish are definitely the latter but a catch, any catch would be a personal best.
The website states that it is not the same as traditional Salmon Fishing(understatement) but it is the best chance of catching an Atlantic Salmon on rod and line(true) and that they fight as well if not better than their wild relatives(doubtful!).
I was the first to arrive, met the owner Ben who was very helpful and stood aghast brew in hand watching big fish leaping about all over the place. It looked like it was going to be 'shooting fish in a barrel'. First impressions can be deceptive. 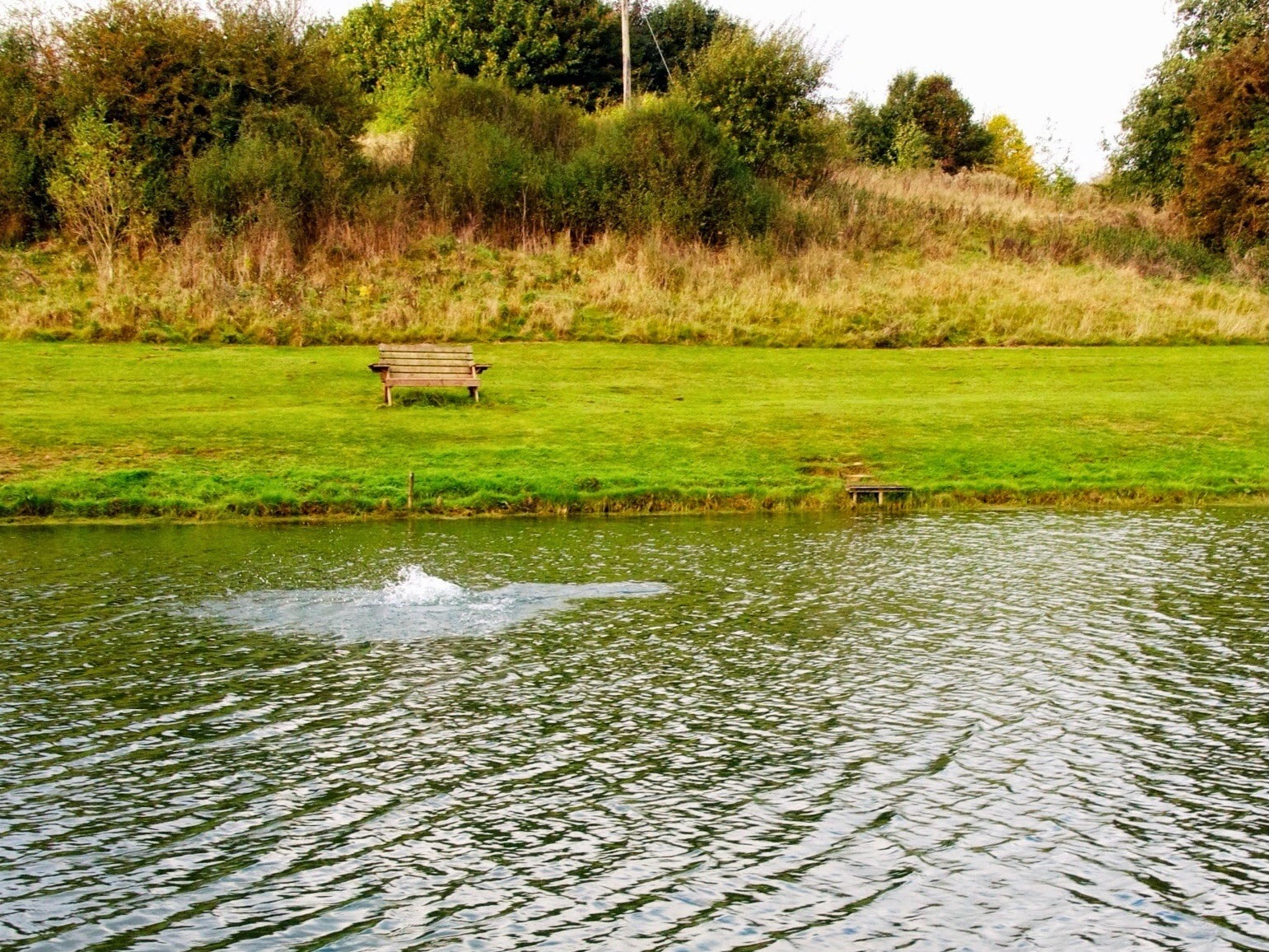 With hindsight I should have taken more photos of the leaping Salmon but I was so desperate to feel the tug from one I concentrated on the fishing. Strong tackle was the advice proffered on the website and I set up my 8weight fly rod with a fifteen pound leader. Ben told us the most productive method was a dark fly, as big as you've got fished slow and deep. I took this on board and started with a black bodied, maribou tailed gold fritz headed lure.
Nothing is ever as easy as it seems though and during the next six hours we tried every lure in the box. We retrieved slow, fast, deep, shallow and all the while the Salmon splashed and leaped. It felt like we were being teased and taunted. Nick lost his temper and on several occasions he shouted profanities at our tormentors.
Having been through the box once I re-tied on the black maribou fritz and skimmed it all along the bottom at a pace so slow it was almost static. Was that a touch? I thought it might have been or maybe the fly just caught some weed but then the weed started to pull back-it was a fish! Sadly it didn't stay attached for very long but at least our spirits were lifted by this lost unseen adversary. I recast quickly, waited for the fly to sink to the bottom and then started the retrieve, figure of eight, extremely slowly. It became obvious that this was what the fish wanted and another took the lure. This time however it was properly hooked, one leap, a few surging runs and before long it was beaten. Not a monster at 5lb 2oz but a stunning fin perfect pb silver Salmon, it really was in excellent condition. 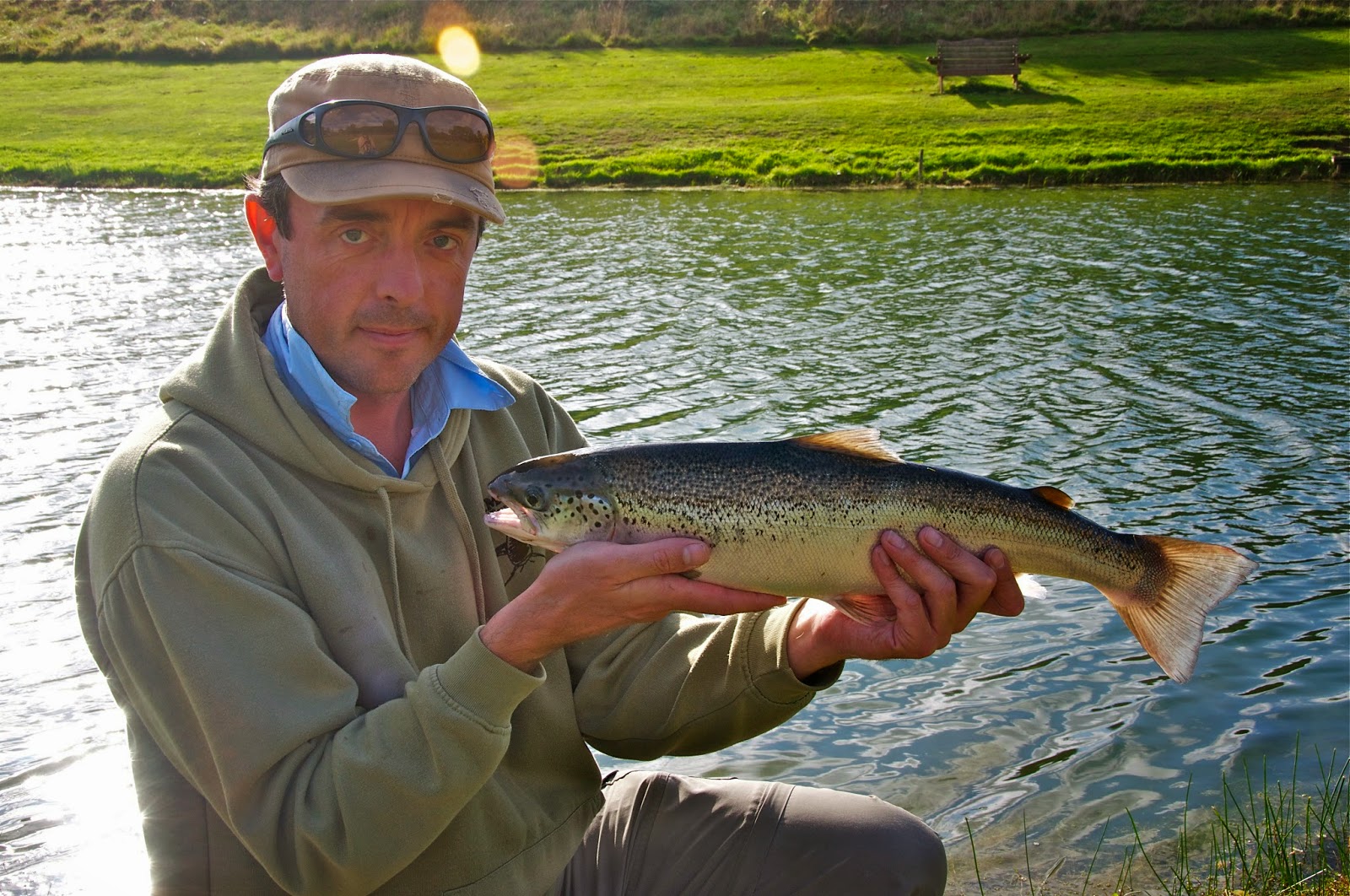 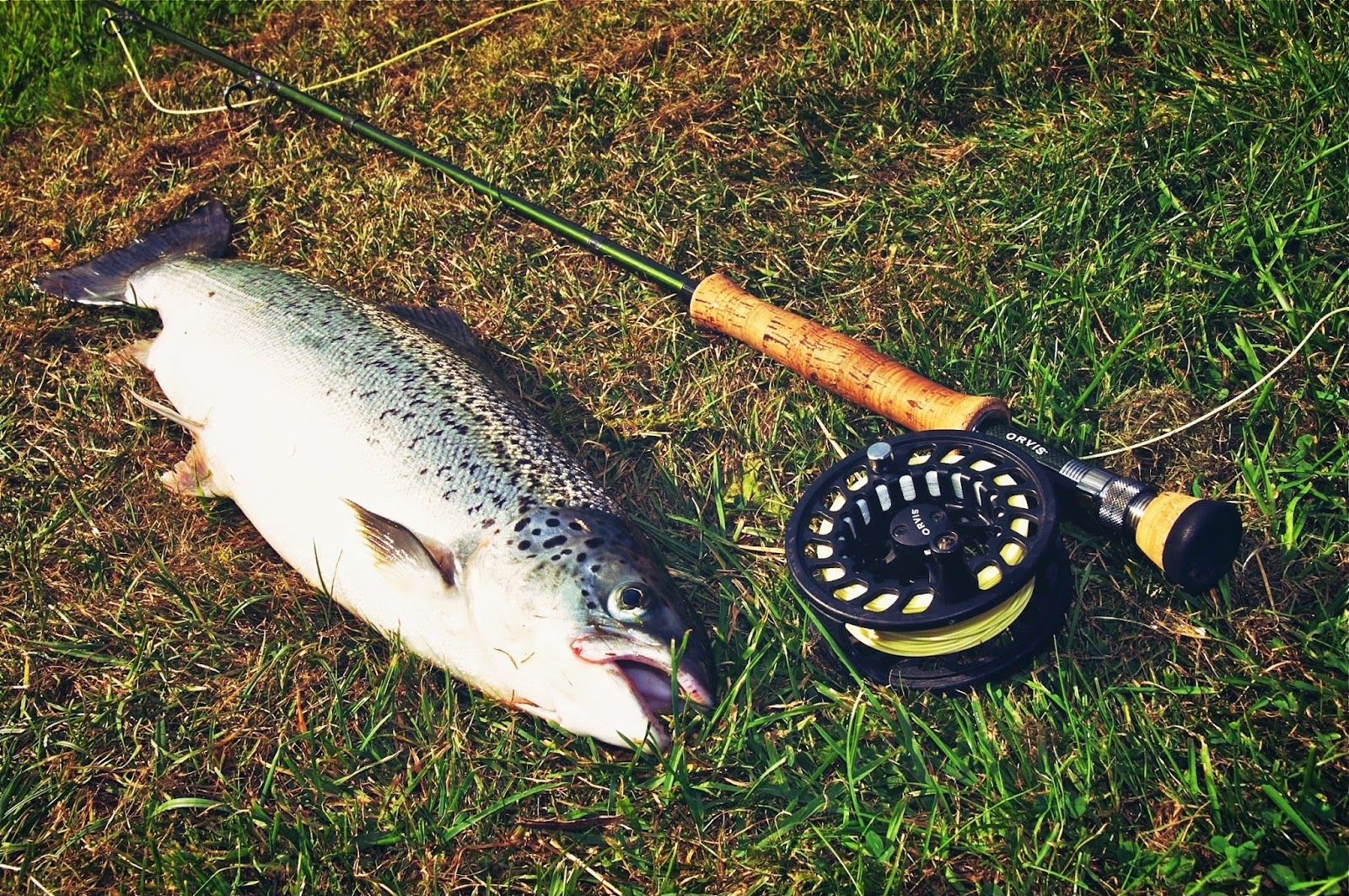 Now we knew exactly what the fish required I gave the exact same fly to Nick and although it took a while eventually it worked for him too and he hooked up to his own hard fighting fish. Our patience had been awarded and he landed his own Salmon just a bit smaller than mine but again another perfect specimen. 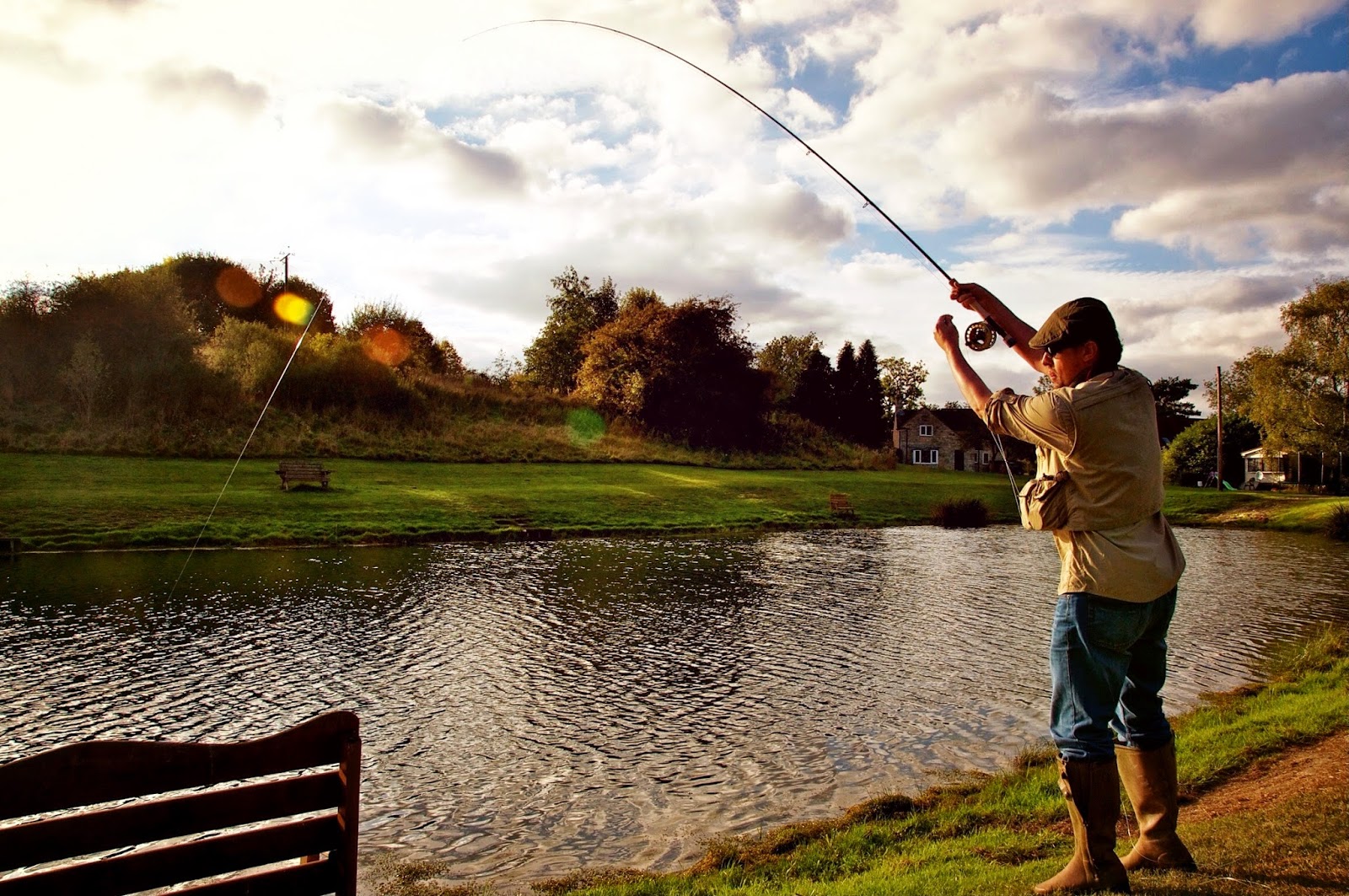 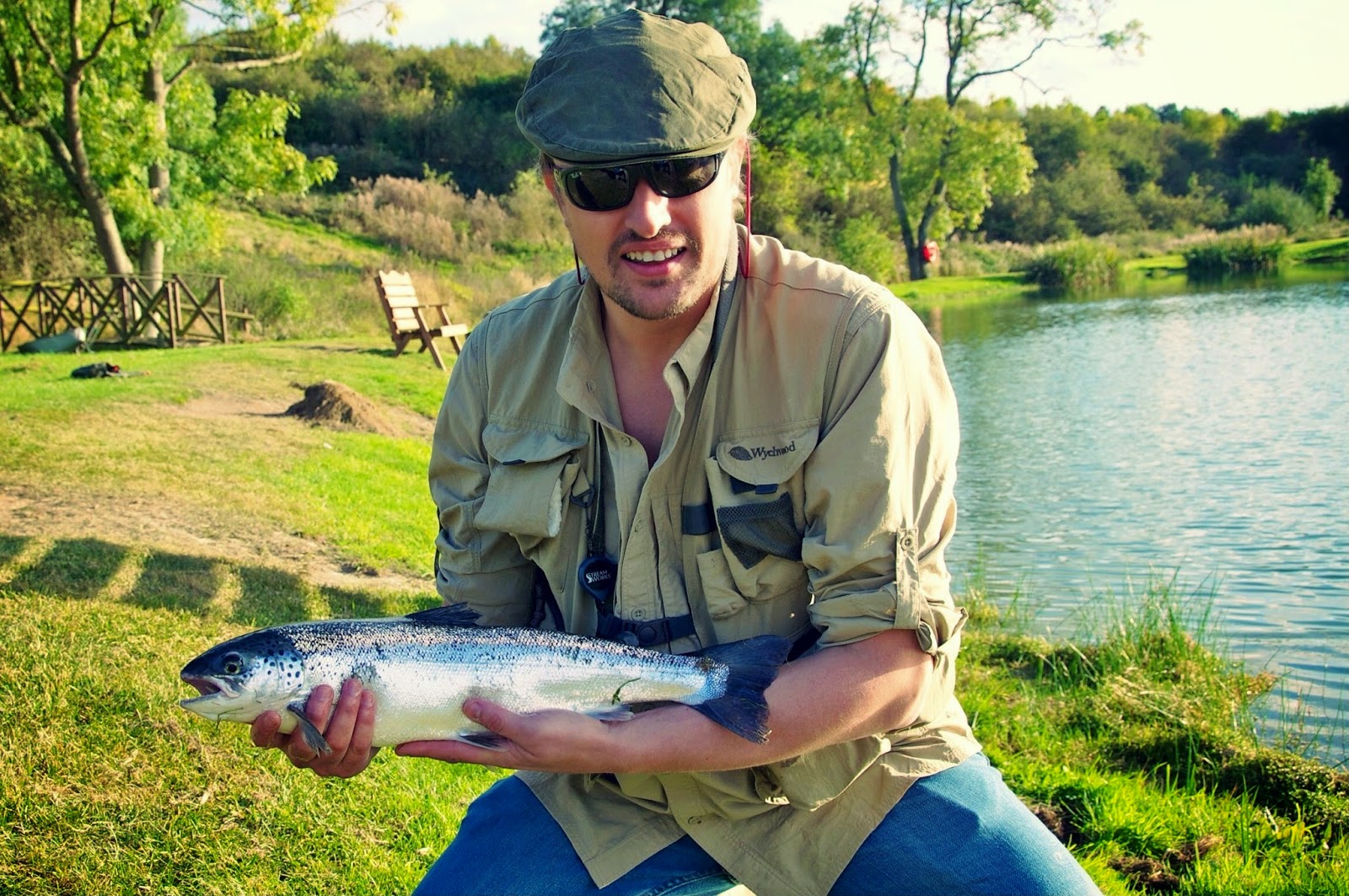 We fished on for about a half hour but that was it for the day, quite pleasing that there was a certain symmetry to it. 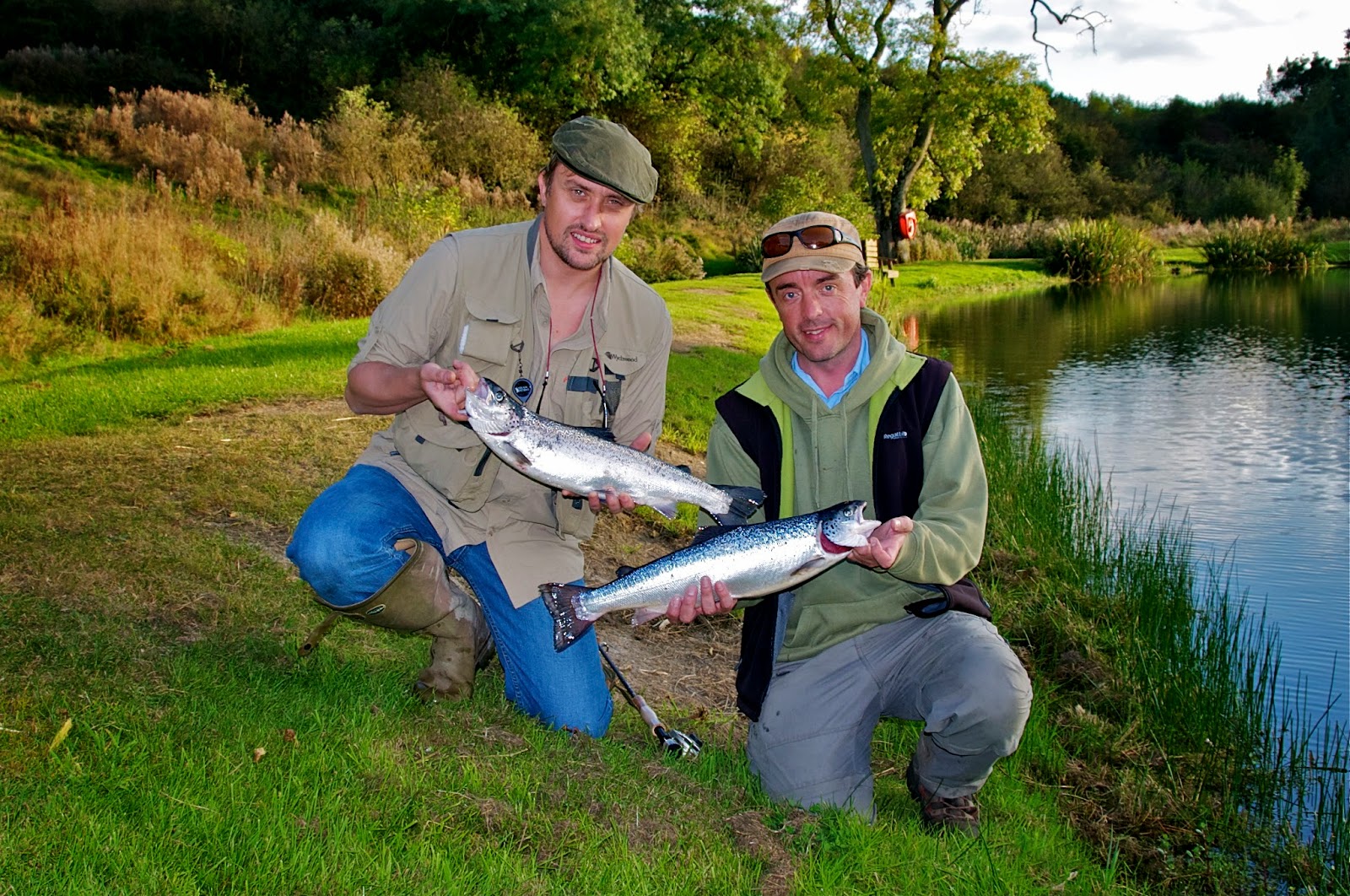 So our first ever Salmon apiece. I am sure that we will not be rushing back there sometime soon but we came to the conclusion that you have to try everything once-purists might not agree!!

Posted by Joe Chatterton at 22:59 No comments: