I am not a big fan of facebook but it is occasionally useful for keeping in touch and finding old friends. I had not seen or even heard from my old fishing buddy Nick Hammond for more than 15 years and it is almost 20 years since we last fished together so you can imagine my excitement as I pointed the car in the direction of Avington Trout fishery and a rendezvous with my old mate and some big Trout.
Avington fishery is an intimate complex of three shallow lakes, chalk stream fed with crystal clear water giving superb visibility and wonderful stalking opportunities. It is located in the stunning grounds of Avington Hall just outside of Winchester and is stocked with some absolutely gorgeous Trout, excellently conditioned full tailed fish. On site there is a well stocked tackle shop, gutting and cleaning facilities and a cafe bar.
The fishery opens at 8am and despite the 80-90 mile journeys we both arrived at virtually that time on the dot. We purchased three fish tickets and went for a recce round the lakes chatting away and spotting fish. The water was so clear that Nick joked it would be easy to just foul hook them.
The far end of the middle lake was teaming with fish so we started there and and within a couple of casts my companion shouted across that he was in, hooked perfectly in the dorsal! His claims of accidental fell on deaf ears considering that it was his idea only moments earlier. His protestations of innocence continued throughout the fight but as we landed the fish it become the source of mickey taking for the rest of the day. That aside it was a good start to the day. 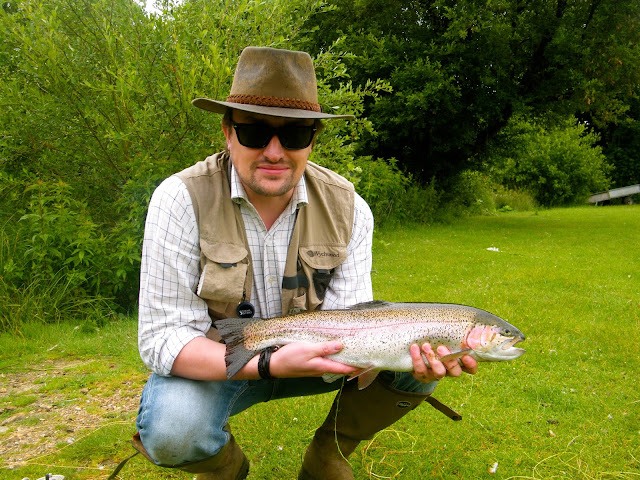 He had caught it on an orange lure so I changed to the same fly, which Nick pointed out was ridiculous as the fish had not taken it properly but it worked and the next cast I landed a 6lb 14oz caught fair and square in the chops. 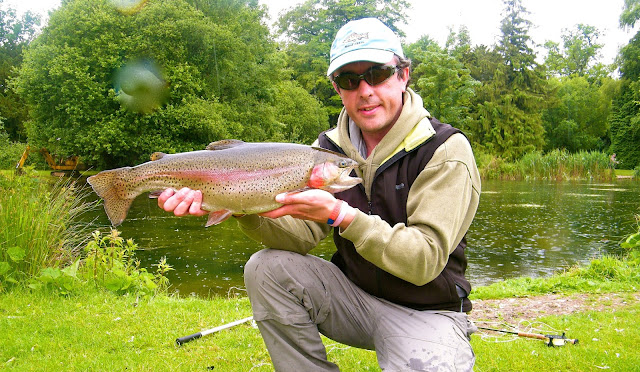 The rain had started so we took shelter and over coffee caught up on events over the last two decades. Between the ages of 11 and 17 we had virtually lived at each other's houses (when we weren't fishing-which was a lot) so it felt quite surreal chatting away after all this time. Once the rain had passed we went back to the fishing, I took the next fish and we decided to slow down, we had all day and didn't want to bag up too quickly. 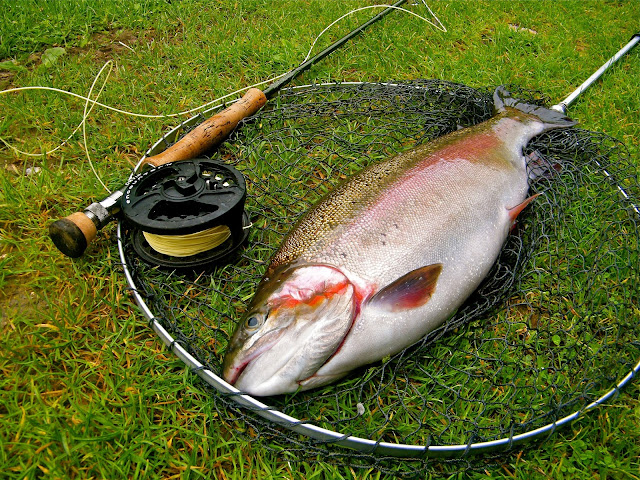 Nick fished on while I went for a wander, with only one fish needed for my limit I went in search of a biggie, and I found one patrolling the far margin. It would have to wait though as a pub lunch was calling, far too civilised!
On the outskirts of the estate is the Bush Inn and I would thoroughly recommend it, fine ales, lovely food and a nice beer garden bordered by a babbling chalk stream. 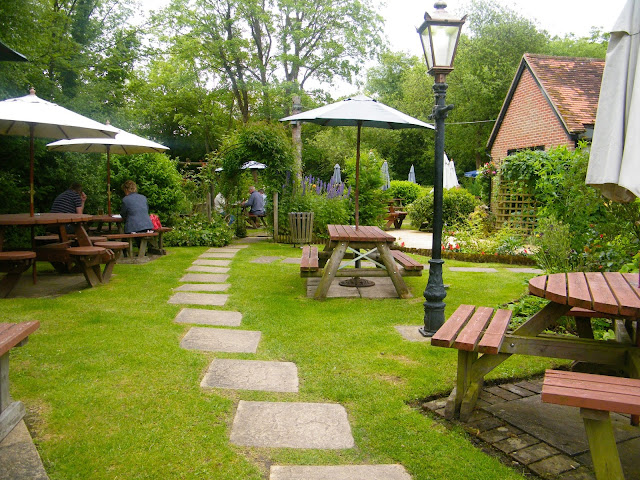 I plumped for the Stilton Burger..... 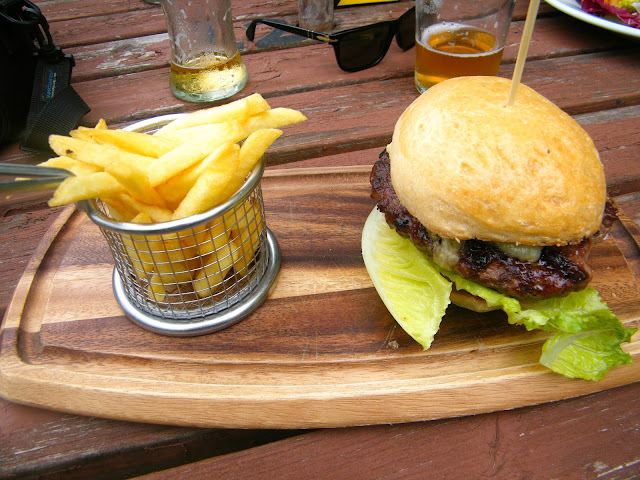 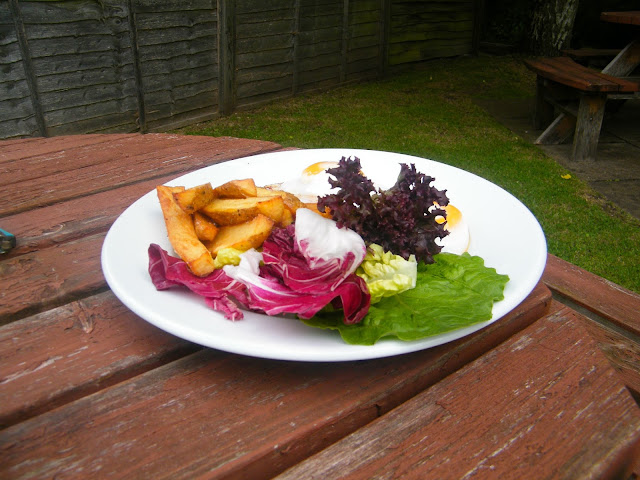 With bellies full we returned to the fishing, I found the big Trout which was now named Walter ( If you have not watched 'On Golden Pond' then do so) and started stalking it while Nick fished further along trying to foul hook anything. Mid-afternoon and he put another on the bank, this time it was mouth hooked. 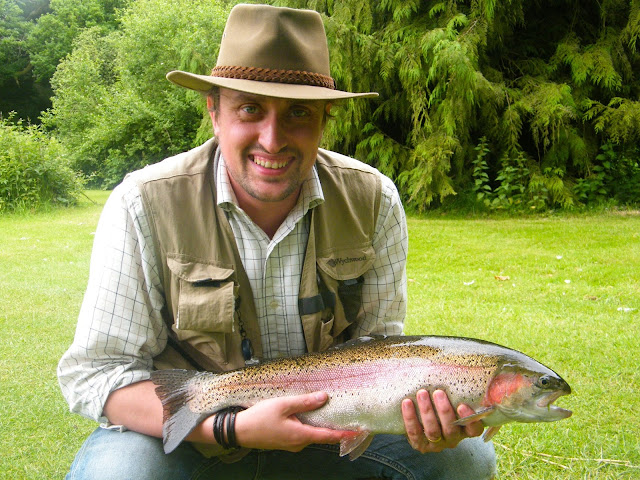 Meanwhile old Walter got spooked by my amateurish casting at him and skulked off to hide so I landed one of his smaller mates. 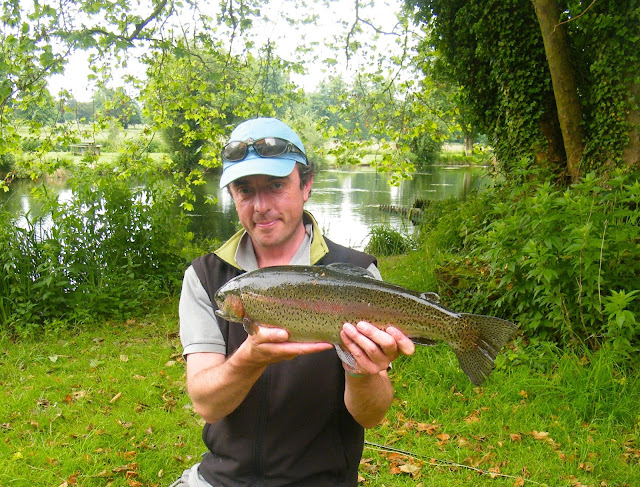 Nick finished off his limit not long after and that was the end of the action, a brilliant days fishing and we vowed to not leave it as long until next time!
Posted by Joe Chatterton at 18:04 No comments: Links to this post 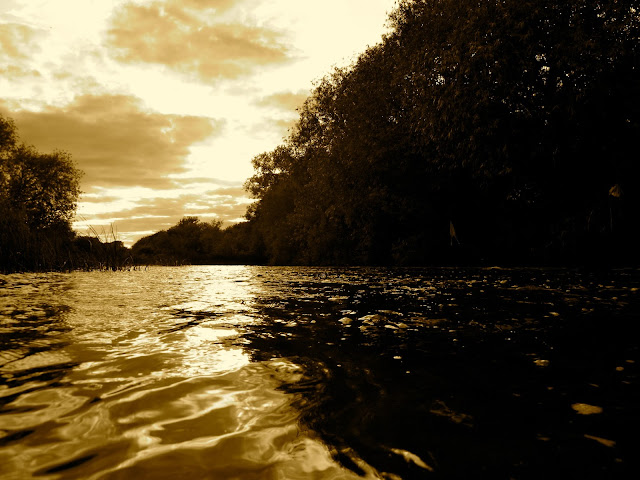 As the sun set on the Warwickshire Avon I spent the evening once again trotting a float down my favourite swim. My target was Barbel but I don't mind catching Chub, they are not seen as nuisance fish in my book rather an added bonus, especially when they are the size of my first of this particular session.
My Loafer float had only just landed beneath the far bank Willows (not an easy cast!) when it shot under and I knew I was connected to a decent fish. Even Chub fight hard in this fast water and when I saw it's big open mouth break through the surface I thought 'this is a five'. It was only in the net that I realised the depth of it and that it could be close to a pb. On the scales it went 5lb 15oz, of course I reweighed it and gave the scales a shake but I could not claim my first ever 'six'. I was and still am however really pleased with a new pb. 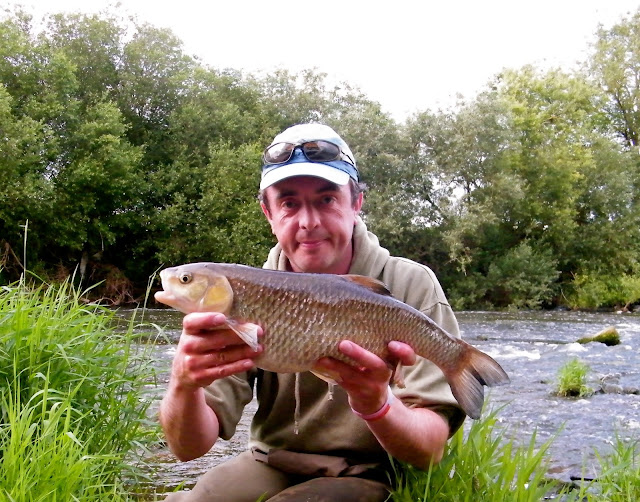 Avon Chub don't seem to be long fish but they do seem to be getting heavier and they are definitely deeper bodied than they were a few years back. 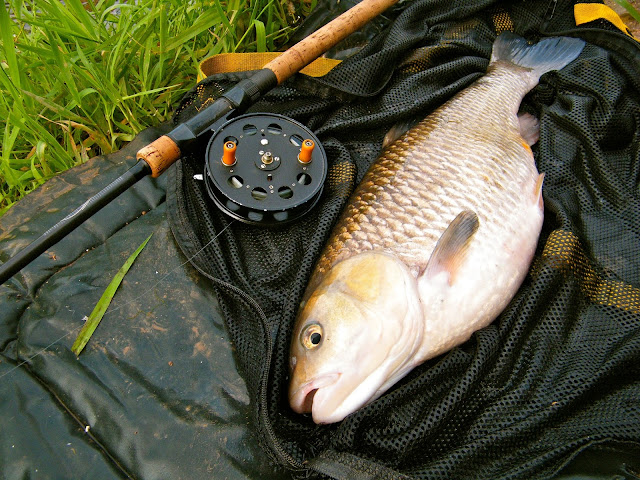 I fished on thinking it would be great to get a new pb Barbel on the same session but the chances were slim- I keep doing the lottery too!
I did however nail a brace of Barbel, the first being my biggest so far of this season weighing 9lb 10oz. 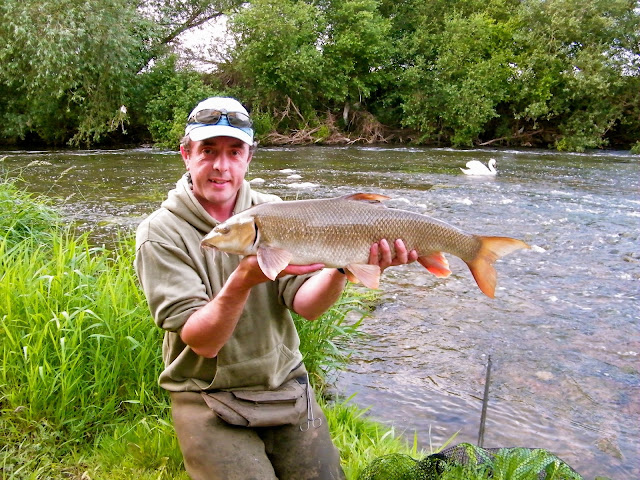 I followed this with a 6lb 5oz fish not long after. 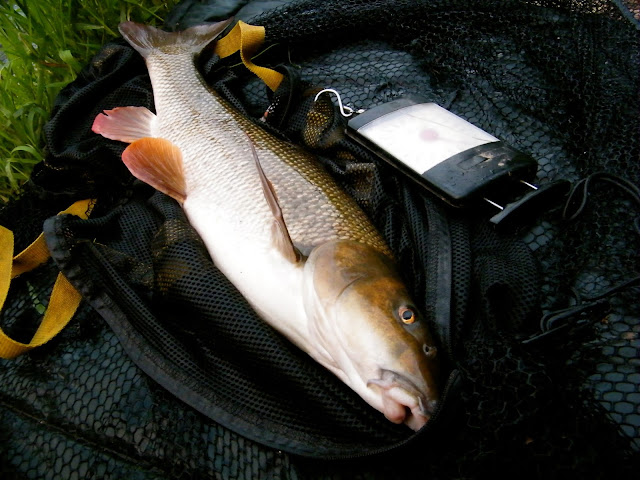 I carried on but that was the last of the action.
Posted by Joe Chatterton at 23:14 16 comments: Links to this post

Trotting for Barbel on the Avon

Just couldn't get to sleep last night, I must have been excited about my first river session of the new season. Surprisingly I didn't feel that tired when the alarm went off at 4am but I am certainly feeling it now. Choosing where to fish was not difficult, I headed straight for my favourite fast water swim to trot some luncheon meat down under the willows for the many Barbel that live there.
It took a little while to get into the swing of fishing in running water again and I lost the first fish probably because I was rusty but after about an hour I had a fish on the bank and it wasn't a bad start weighing 8lb 14oz. 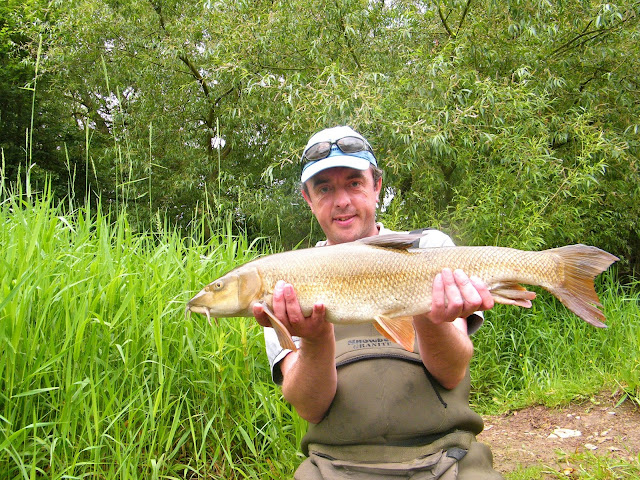 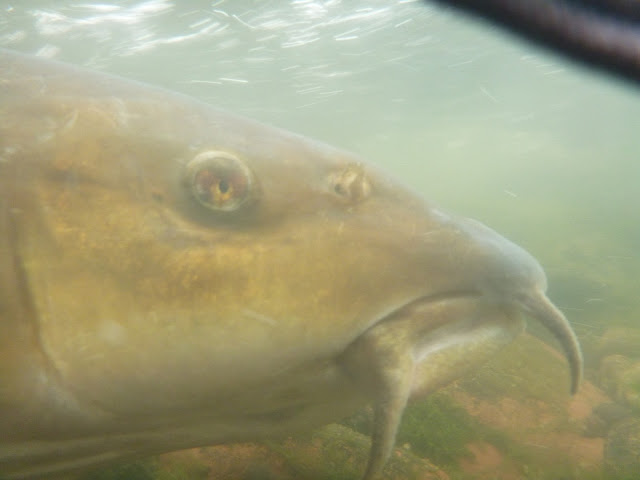 I helped her recover in the fast water (whilst messing about with the under water camera).
Having got that first fish under my belt a steady succession followed all falling for my moving meat approach.


At midday I called it a day finishing the session with seven Barbel and three Chub- not a bad mornings work!
Posted by Joe Chatterton at 20:51 17 comments: Links to this post

The new season begins but rather than rush down to the river I decided to avoid the crowds and pointed the van in the opposite direction towards the crystal clear gravel pits of Oxfordshire. My Tench campaign has been nothing short of a disaster this year so old Tinca was the target for my worm hook baits. The conditions seemed just about perfect, warm and overcast with just a slight ripple on the water. I arrived late due to a thick head from a mate's wedding the day before but was pleased to see I had virtually the whole lake to myself.
As I walked the bank a Tench porpoised about thirty yards out and made swim selection a doddle. It looked like it was going to be easy pickings but fishing is rarely just that. I had my first run after a couple of hours, just before lunch, an absolute screamer and just as I was taking control the hook inexplicably pulled-gutted. The line was covered in slime so it must have been a Tench and the speed of the fish had me thinking it was a small male.
I was beginning to think that it might be the only bite of the day when the alarms registered a stuttering take. I struck into another fish, much more of a plodder and when it finally surfaced my suspicions were confirmed, a good size female. I let out a sigh of relief as I bundled her into the net and on the scales she registered 8lb 13oz. At last a decent Tench on the board. 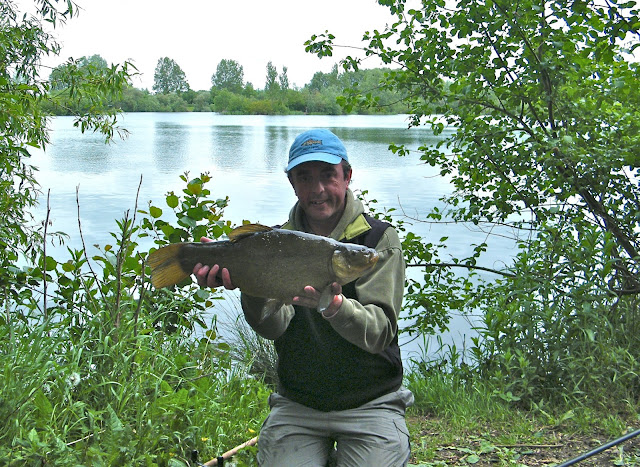 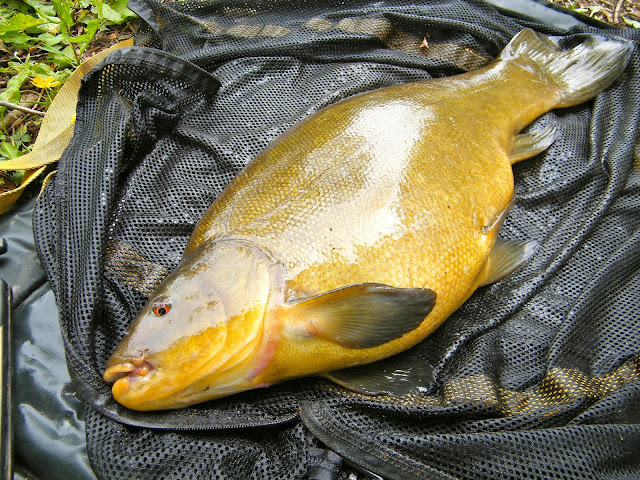 Oxford Tench really are stunning creatures.
I managed one more run but annoyingly the hook pulled again so I gave up early, it was father's day and I wanted to see the kids some.
Posted by Joe Chatterton at 21:22 No comments: Links to this post

An evening with Carp

It seems like ages since I last had a chance to get on the bank but it is only a fortnight, just far too busy at the moment! This evening I grabbed a Carp rod and a bucket of dog biscuits and popped down to a local puddle for a bit of fun. I knew there was little chance of landing a monster but there has been a rumour circling round that an unknown thirty pound leather has recently come out of the water in question. I had no designs on landing that particular fish, just a pull back on the line would be satisfactory. Upon arrival I stopped for a quick chat with an old bloke who was also floater fishing. He was blanking but I am not sure why, he had fish topping all over the place in front of him!
I set up a couple of swims away, close enough to join in the fun but hopefully not really stepping on his toes.
It didn't take long before I also had fish in front of me and within ten minutes a decent fish fell for my banded floater. It put up a spirited battle trying several times to snag me in tree roots but eventually it tired and rolled across the net cord. It scraped into double figures weighing 10lb 11oz, an old warrior of a mirror Carp. 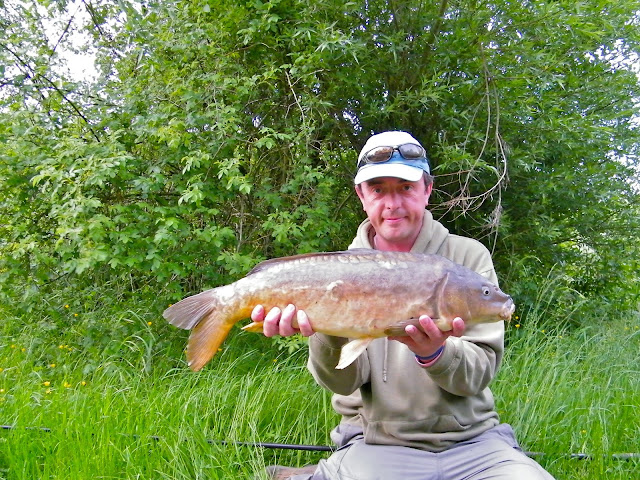 The fish became a little spooky after the disturbance but eventually started feeding again in ernest, only trouble was the light was fading and I was struggling to pick out my bait amongst the freebies. I hooked and lost a smaller fish before deciding on a change of bait. I tied on a fake 'dog biscuit fly' which was much more visible in the impending gloom. 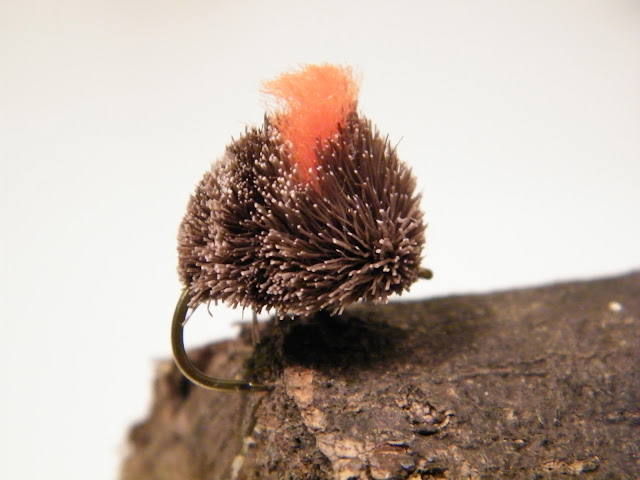 A deer hair pattern with a red wooly sighter trimmed to size on a size 10 barbless hook.
To begin with the fish shied away from it but as it got wetter it sat lower in the water and they took more interest. I missed a couple of takes before eventually I connected with another battling Carp. By the time I landed it it was really dark so I took a quick net shot and returned it to it's water home. 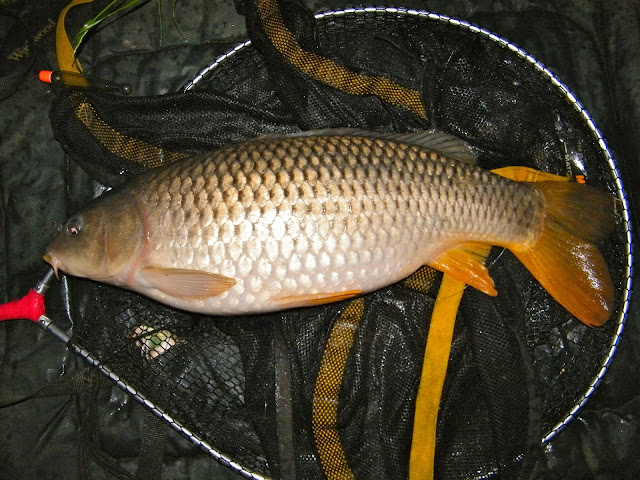 Another scraper double, this time an immaculate Common weighing 10lb 2oz. The promised rain had just started so I called it quits and buggered off home.
I was never going to break any records but floater fishing for Carp is a good way to spend a couple of hours. I certainly caught a more than the idiots blasting out music on the other lake!
Posted by Joe Chatterton at 22:54 4 comments: Links to this post