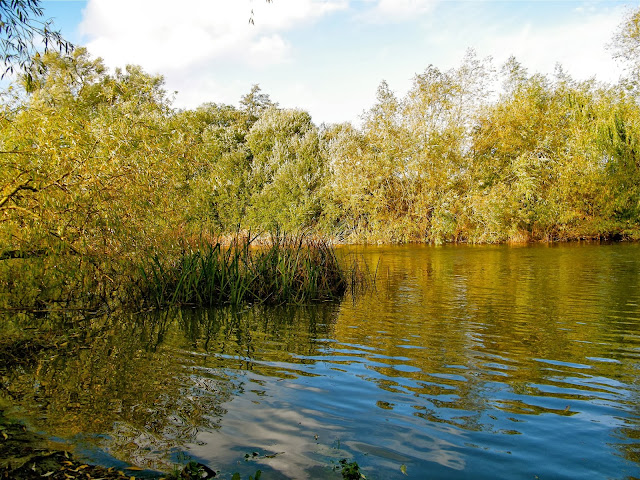 The river looked perfect for a Barbel, about a foot up with a touch of colour. The forecast rain had not materialised and the sun shone all day. I didn't see it until mid-afternoon though as the previous nights over-indulgence meant I needed some extra sleep.
My excessive lethargy also meant that I could not be bothered with trotting instead choosing to sit behind a pair of static rods and wait. 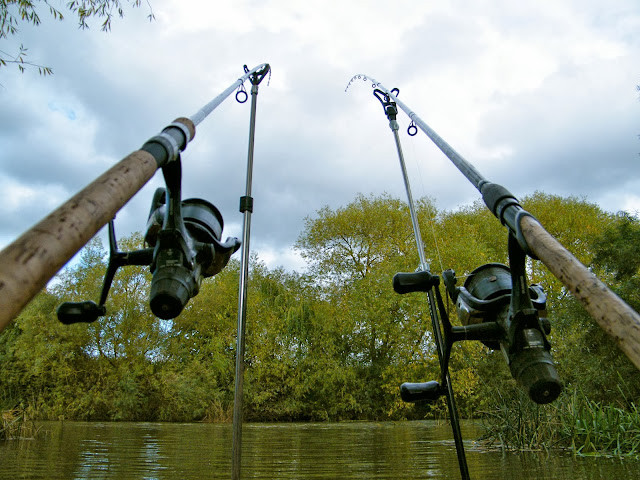 Bait was the usual Spam but this time a flavoured variety. The plain stuff works really well but the fish do seem to like a bit of Garlic with their snack. 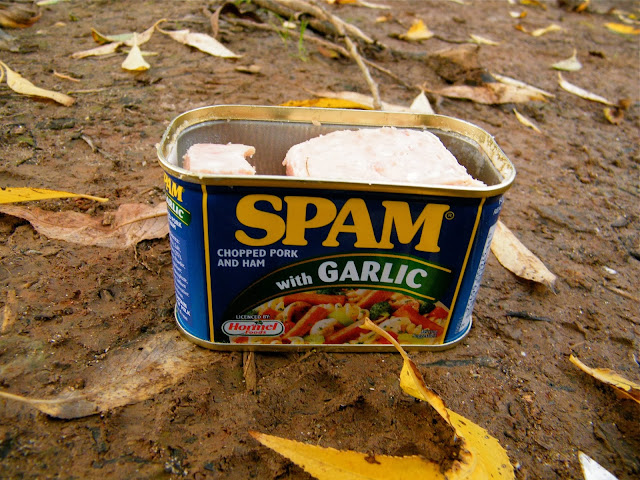 It was a quiet session but I avoided a blank with an Eel which I photographed and unhooked in the water, doing my bit for their conservation. 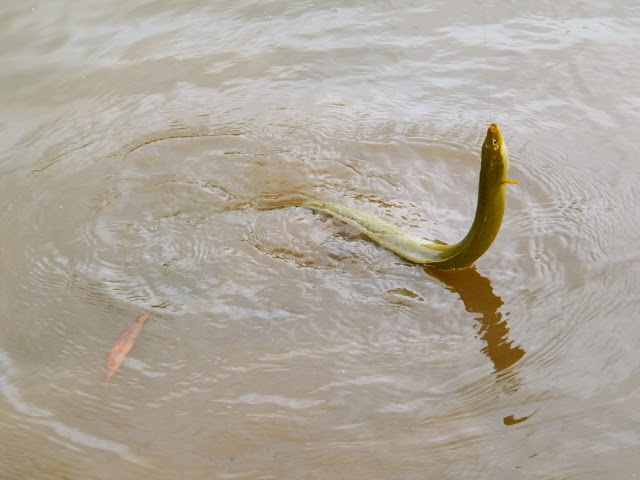 I didn't have the energy to sit out long and went home early for some more tablets. It definitely takes longer to recover the older I get!!
Posted by Joe Chatterton at 20:30 2 comments: Links to this post 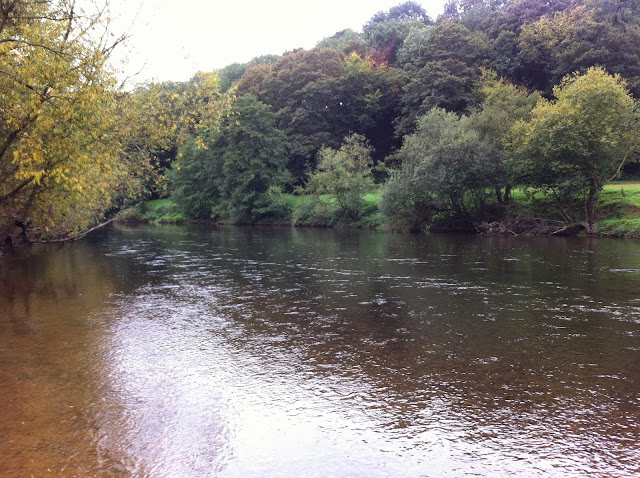 Another fitful nights sleep caused by the usual pre-fishing session excitement was interrupted by the 5am alarm call, to be honest it was a bit of a relief. Today Martin, Dave and I were heading down to the middle Wye just the other side of Hereford. It was a section I was unfamiliar with so I packed virtually everything, trotting gear, Barbel rods and Pike rods plus a selection of baits to match. It only just fitted into Martin's estate as he had packed the same amount if not more!
We met Dave at the car park down by the river and wandered across the field to discover a typical stretch of this beautiful river, shallow riffles interspersed by slower runs with deeper holes all bounded by Willows, Ash and Elm. Dave suggested also having a gander at a section beyond the woods but I had seen enough and persuaded him that wetting a line straight away would be a much better option.
Dave and Martin chose a pellet attack targeting the Chub and Barbel in the deeper section while I ventured upstream to an enticing trotting peg. A Cattle drink stretched into the river and from this point I could wade out to the middle and enjoy a 90 yard long trot with maggots. I attack a new stretch of water like a batsman builds a cricket innings, get off the mark as soon as possible ie avoid a duck/blank and then build an innings/netful as the day wears on. Trotting maggots is not selective but it would get me off the mark.
It took slightly longer than expected but eventually I hooked into a good fish a long way down the run. It used the powerful flow to it's advantage and kited into the near bank straight in to a snag. I released the bale arm and wandered down the bank. From a higher vantage point it was possible to see a Chub tethered to a fallen branch. It was only shallow so I waded into net it and as I did it managed to slip the hook.
I carried on trotting and within minutes struck into another fish but this time I knew where the snag was. The fish made a beeline for the branch but I was able to steer it safely past to the waiting net. An immaculate Chub of about two pounds that spewed up a bellyful of maggots. 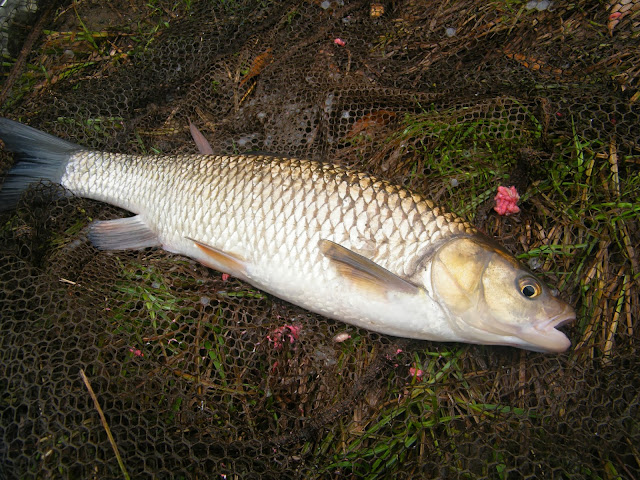 There is only one slight problem with fishing a cattle drink, cattle! Initially just the one came down for some morning refreshment, but then all his mates followed as well. 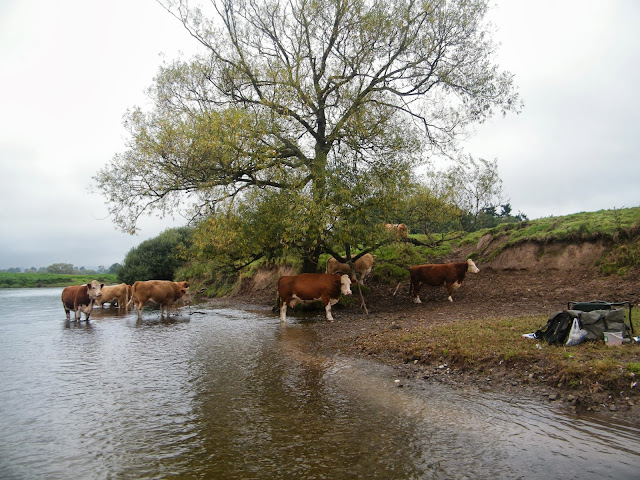 Thankfully they were obviously used to seeing people down the river as they just ignored me, some cows can be a nuisance trampling over fishing gear and getting too close but these ones just left me alone.
I was also grateful that the fish were used to them and a succession of Brown Trout were carefully captured and released back into the swim. 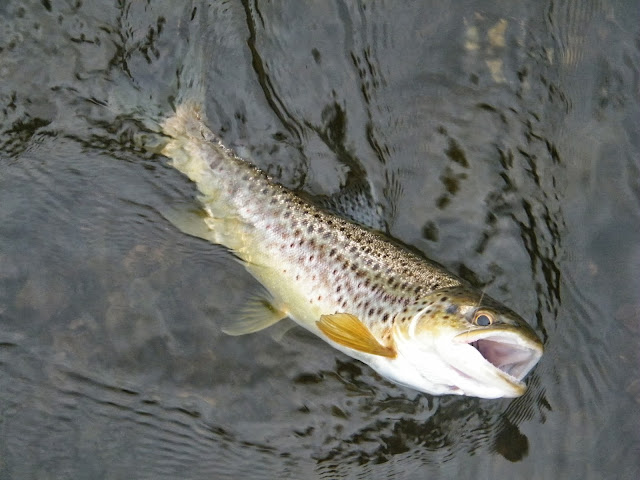 With Brownies being out of season I decided that a change of both tactics and swim was required so I headed downstream to a more sedate swim with increased depth and some good cover from Willows, there had to be Chub in residence and I was not wrong. 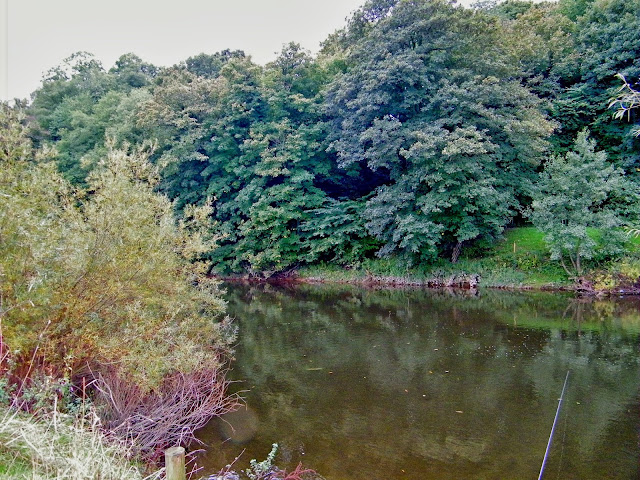 First cast and the rod hooped round and the fish headed straight into tree roots and escaped, transferring the hook in the process. I pulled for a break and managed to snap the rod's tip ring clean off! In order to be able to continue fishing this swim I was going to have to use 'hit and hold' tactics, bullying any fish hooked so I upped my hooklength to eight pound breaking strain and increased hook size from an 18 to a 16. The larger diameter line did not affect bites and the very next cast the rod wrenched round again but this time I gave it some serious welly. At first I thought it was a Barbel such is the power of these fish but it soon became apparent it was a decent Chub when a pair of big rubber lips breached the surface. Not a monster but a hard fighting 4lb 6oz immaculate specimen. 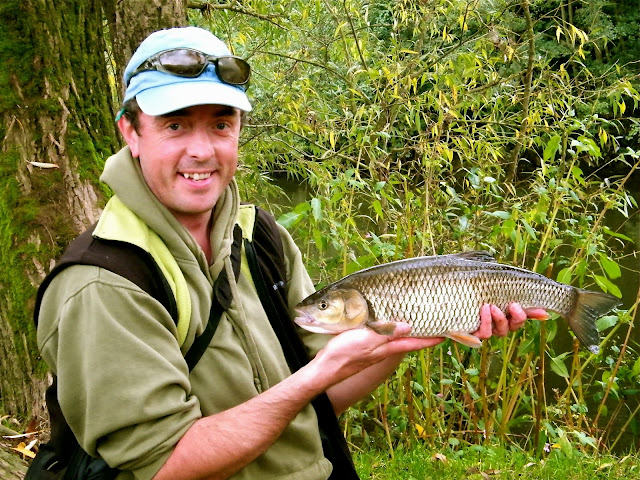 Several more Trout and Chub followed and each time the fight was brutal. I could not believe I was getting beaten up by average Chub and small Trout! I felt knackered! They were all in excellent condition too.
Time was marching on and come late afternoon I struck into yet another fish but instead of heading for the snag this one set off past it and downstream and there was nothing I could do about it. A right ding dong followed, I was hoping it was a monster Chub but I was not disappointed when I eventually saw I was attached to my first ever Wye Barbel. I kept on with the heavy pressure until it was beaten into submission.
I have never caught a Wye Barbel before so I guess it is a kind of pb, all 4lb 14oz of it! 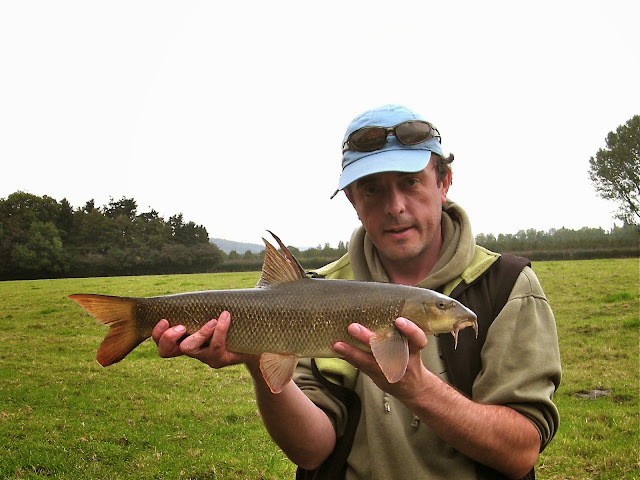 By now Martin and Dave had changed from pellets to maggots and they were also catching well now.
More Chub (and a solitary Dace) followed for me before I landed my second ever Wye Barbel, again only a small one, 4lb 10oz. 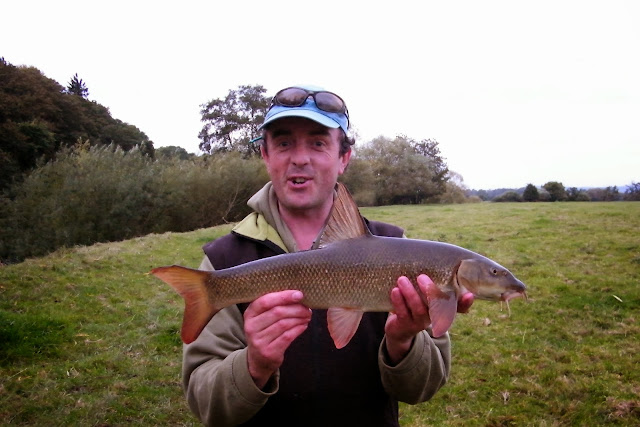 The silly expression is me telling Martin that it was worth photographing and to just get on with it. That was the end of the action.
A superb day spent in stunning surroundings on a magical river.

Posted by Joe Chatterton at 08:22 3 comments: Links to this post 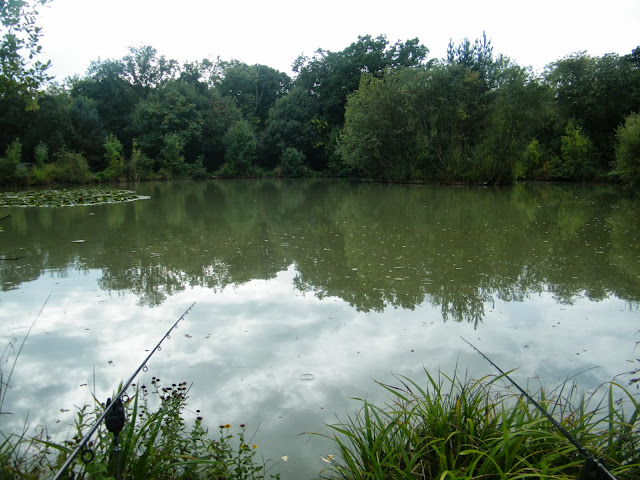 Since my last post I have only managed a couple of short sessions due to one thing or another. I fished Willow Farm(above) chasing the reputed big Perch that reside there but I only managed a few smaller ones. I did see the biggest dragon fly I have seen, it was more like a small bird than an insect. 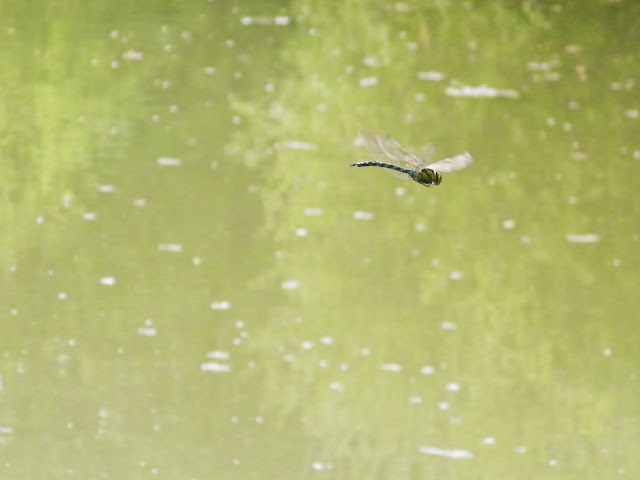 And I also went out chasing monster Trout at Lechlade fishery but again all I managed to catch was small Perch, a shoal of which went mental for a 'Barbie' pink lure. 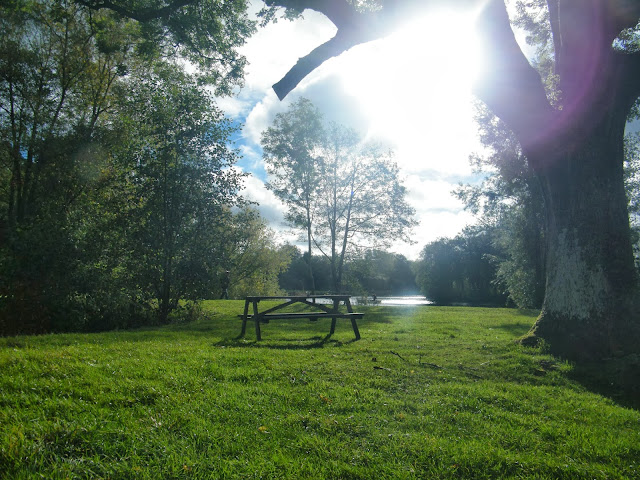 My Perch mojo has deserted me again!
Posted by Joe Chatterton at 23:16 No comments: Links to this post