A trip to Swansea ended in a blank, one hooked fish, one lost to a hook pull. Still the night out was fun and Andy did catch so it wasn't a complete waste of time. Saw a few fish but they were quite spooky in the brilliant sunshine. 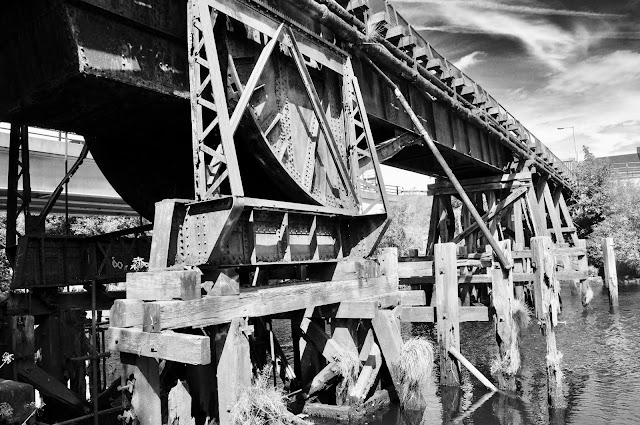 An evening session on the Avon was more productive. I am in the market for some new Barbel rods so Andy has lent me his Harrison Torrix 1.75 test curve to try out. Wasn't sure about the look of it, quite a light but thick blank but looks can be deceptive. It casts beautifully and when I hooked a hard fighting Barbel close to snags it took on it's full curve and I must say I was impressed with the power and feel. 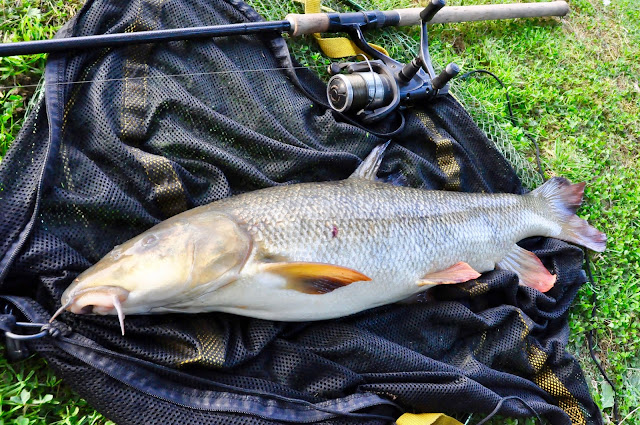 Despite only having one eye the 7lb 9oz fish gave the rod a proper workout and I felt I had much more control than with my current set up. The rod is still in the truck so I think I will give it a couple more sessions before taking the plunge. Need to be sure as they aren't the cheapest on the market. 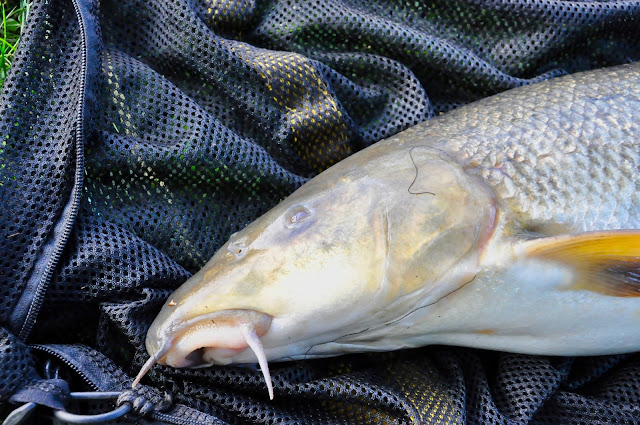 While the Kids are Away

Managed  a couple of evenings out while the kids are on holiday: 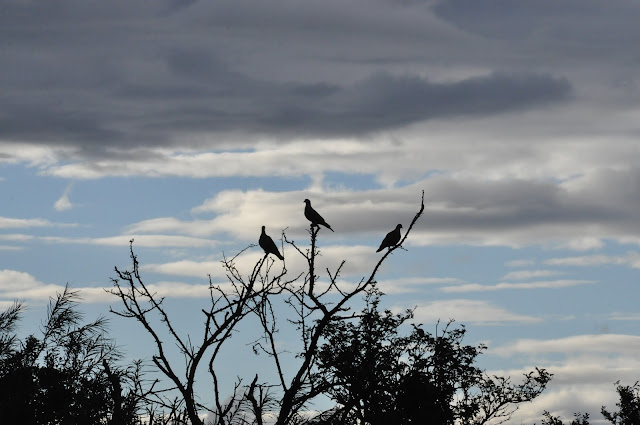 Grabbed a load of maggots and headed down to the Avon. The Perch were hungry and landed one after another all about 2-4oz plus a few small small Roach and Dace. Nothing special but then I didn't set my stall out for anything bigger. 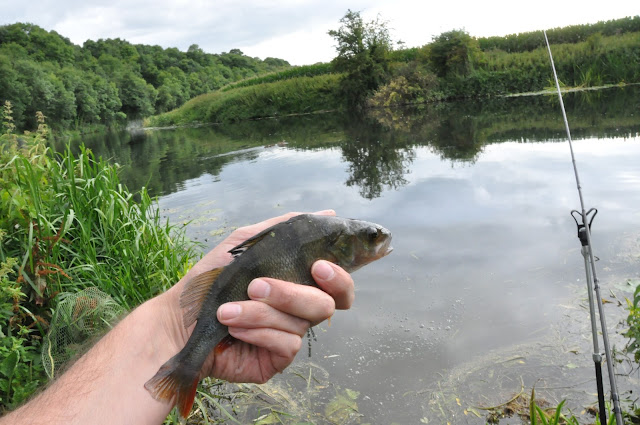 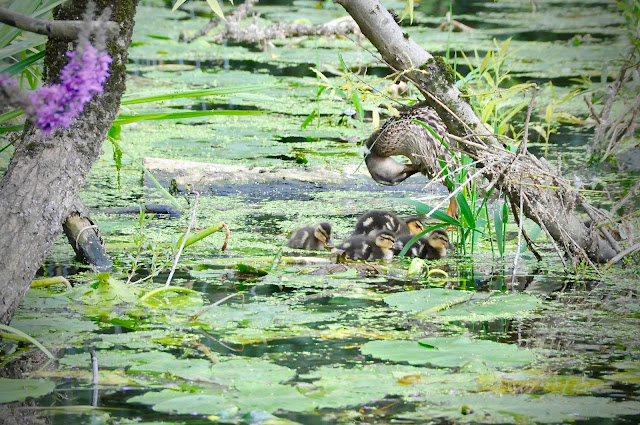 Last night was back on the Barbel with a single rod fishing pellets and pva bags plus a second 'sleeper' rod baited with small Roach for any predators that happened to be passing by. The action was very slow until the light faded and the sleeper rod was first to go. A small Pike that tail walked a bit before it snagged me up in some of the masses of weed that is prolific this year and then escaped.
As I turned round to rebait the Barbel rod bent double and I enjoyed a fabulous scrap with a fit seven(ish) pounder.
One more classic Barbel bite which failed to connect and then the swim went dead again. A very short little feeding spell but at least I avoided the blank. 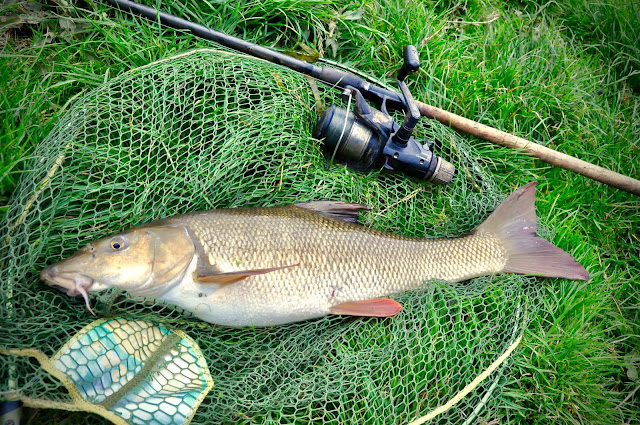 Posted by Joe Chatterton at 15:23 No comments: Links to this post

There are not enough hours in the day to write comprehensive blog posts about each session. Hence from now on it will have to be monthly updates, here is one for July. 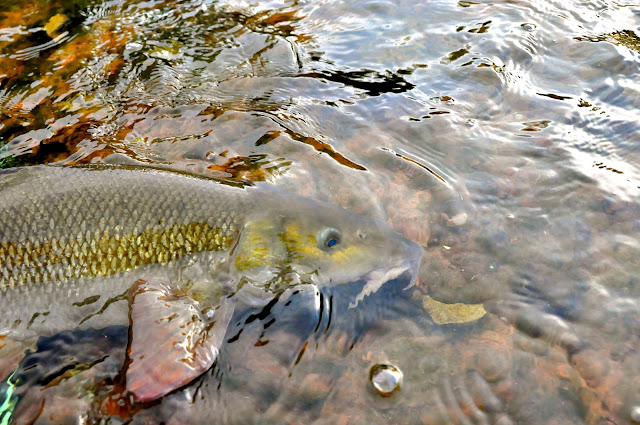 Two small Barbel landed both around five pounds-odd. Back home in time for breakfast. 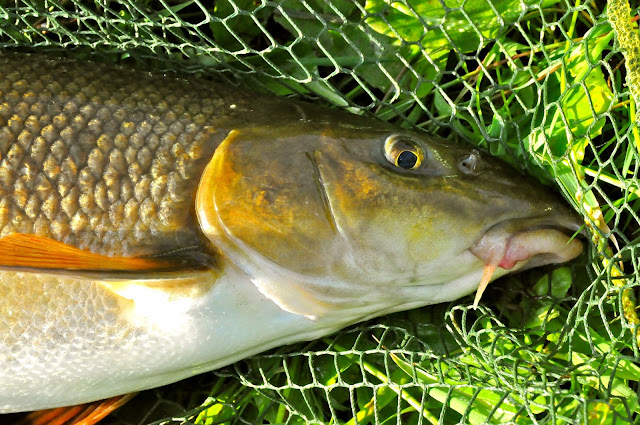 A pleasant evening fishing pellets on the upper Avon stretch that is fast becoming my favourite stretch of the river. Picturesque, peaceful, private, no boat traffic and full of fish. I feel the average size is probably less than I am used to but who cares. It is fun and there is certainly a few good doubles to be had. 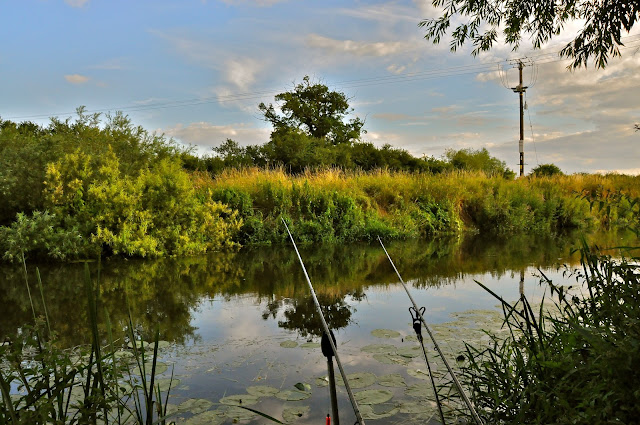 One lost Barbel (my fault-gave it too much welly) and a brace of Chub landed on this occasion both around the four pound mark. 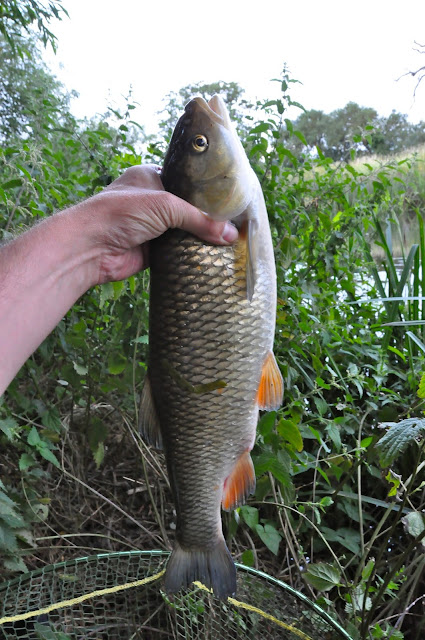 Back on the peaceful syndicate stretch and this time the Barbel did play. Small fish but immaculate and a good indication that this stretch has a bright future. Pellet and Pva bags again proved their downfall. 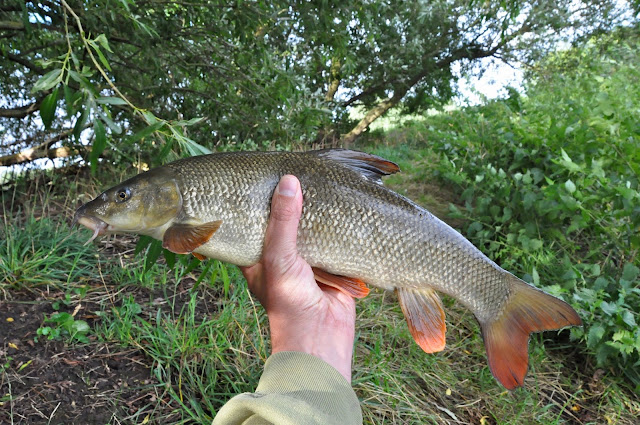 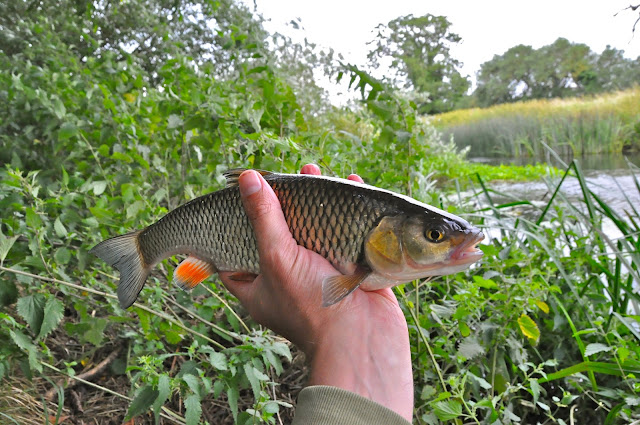 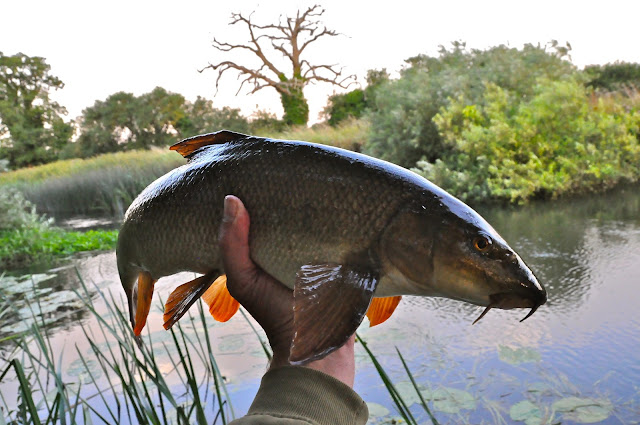 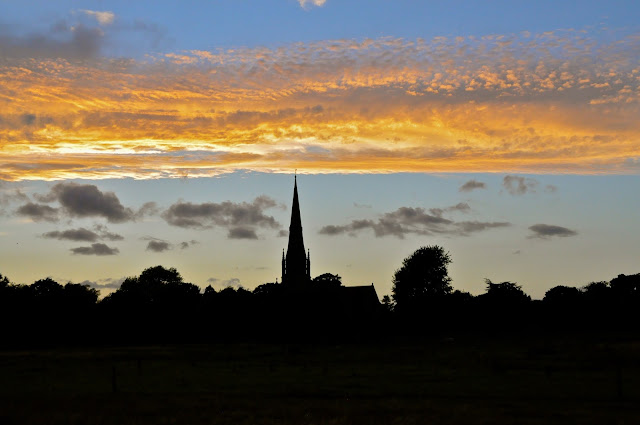 Another early morning jolly but a blank this time. Got a proper soaking. Did manage to get this photo of two expert fishermen having a chat about their favourite swims! 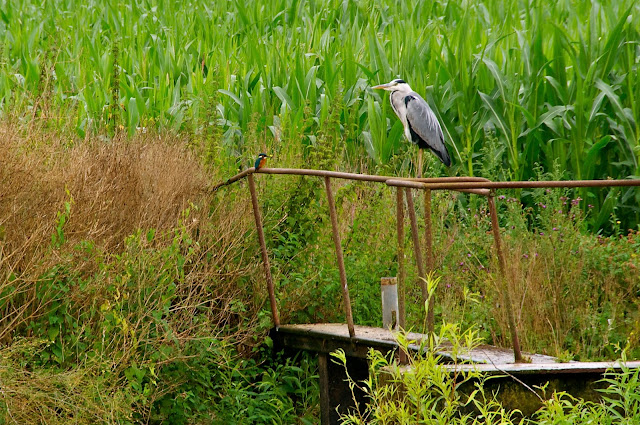 An evening session, pellet on one rod but this time I fancied a bit of variety so small Roach deadbaits were deployed on a second 'sleeper' rod in the hope that some Zander might be in the mood.
First up a terrific battle with an 8lb 10oz Barbel. They don't half pull back in the low clear conditions but all held firm. 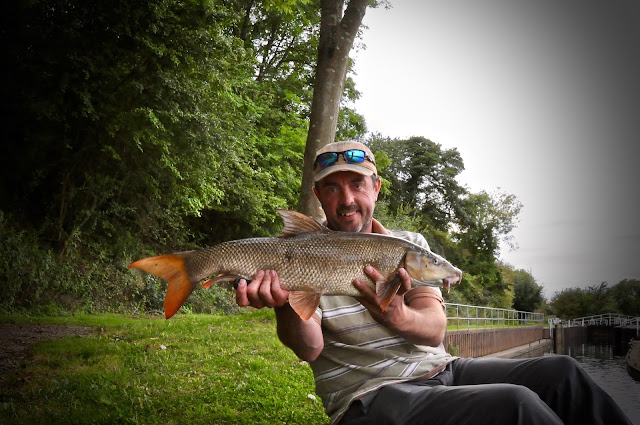 The fish needed nursing in the margin for quite some time having expended all her energy in the battle but finally she swam off strongly. 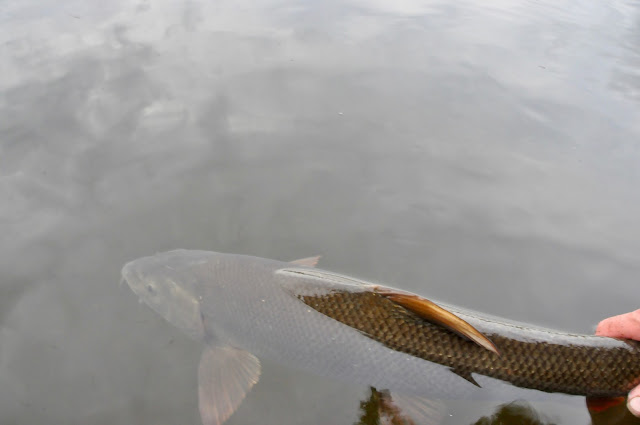 Sadly that was the end of the action on the pellet but I did have some fun with tail-walking Jacks on the dead bait. Two landed, biggest 5lb 10oz. 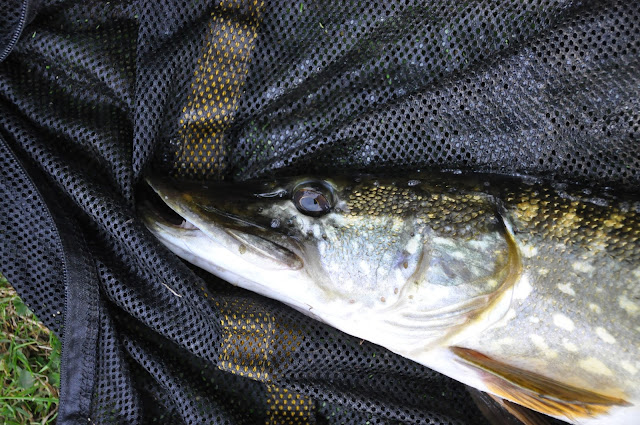