It has become a tradition of mine (or maybe an addiction) that the first day of sunshine and warmth that we get I go fishing for Rudd. They are so synonymous with warm summer days it is hard not to. There is a small overgrown lake local to me that is full of them. I don't believe there are any monsters in there but every visit I hope to cross paths with a two pounder. So far I haven't come close, 1lb 2oz is my best. Action is guaranteed and after a long tough Winter it is nice to get bites and lots of them.
Tactics were simple, two rods, the main one baited with pellets under a waggler and the secondary one baited with a Prawn in case there were some Perch on the prowl along the margins.
No point in plumbing the depth and scaring fish with a lump of lead, I would be fishing the pellet on the drop so started at about three foot and kept it at that depth all day. I have experimented with maggot at this venue but have been plagued by 1-2oz fry, the pellet catches bigger fish.
I caught right from the off and continued to for the whole of the day. Mostly Rudd but occasionally Roach if the bait got missed on the drop and found it's way to the full depth that the rig would allow. A pattern emerged, if the bait was taken in the first 30 seconds it was a Rudd, if it took longer a Roach would have it. They were definitely swimming around at different depths.
After about an hour of catching I struck into something very different. This fish actually took line. It didn't take long for me to realise it was a Carp and not my dream Rudd but I still enjoyed a brilliant battle on a light outfit. Eventually a spirited immaculate Common of about four pounds lay in the folds of the landing net. 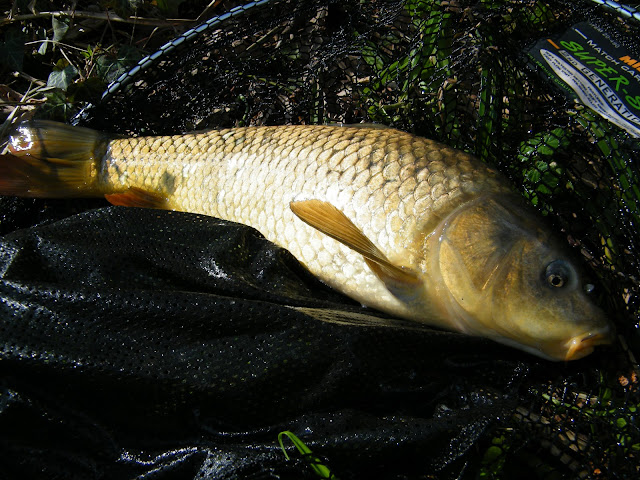 I carried on catching more Rudd and Roach plus a couple of heavily pregnant Perch before a screaming run on the Prawn broke the rhythm. Another cracking battle ensued and with only four pound hook link and a size 12 hook I had to be cautious but in the end I won. My prize was another immaculate Common. This one was certainly much bigger but I did not feel the need to weigh it. Today was about fun not weights (unless it was a pb shaker!) 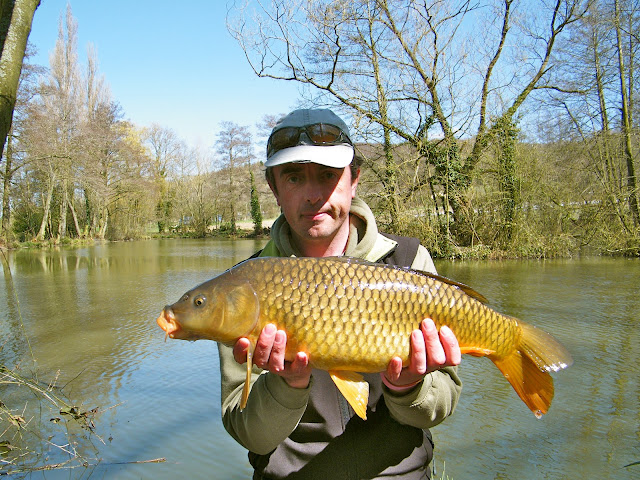 That was it for Carpy interventions but I fished on catching plenty more Roach and Rudd but nothing greater than about a pound. I ended up with well over fifty fish for the day and made the best ones pose for a (quick) photo in the sun. 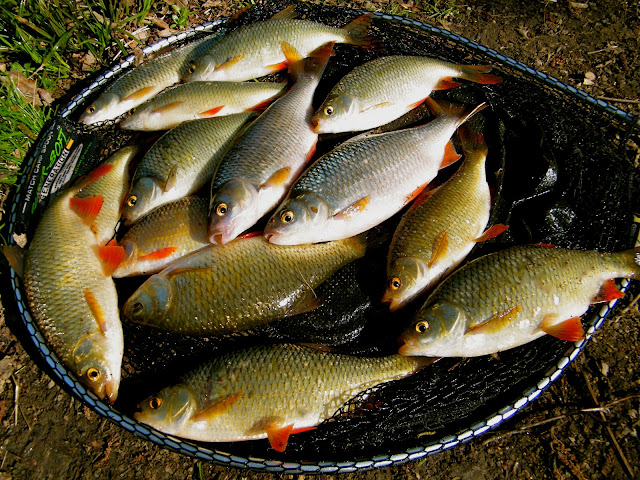 I set off home a happy and contented angler. 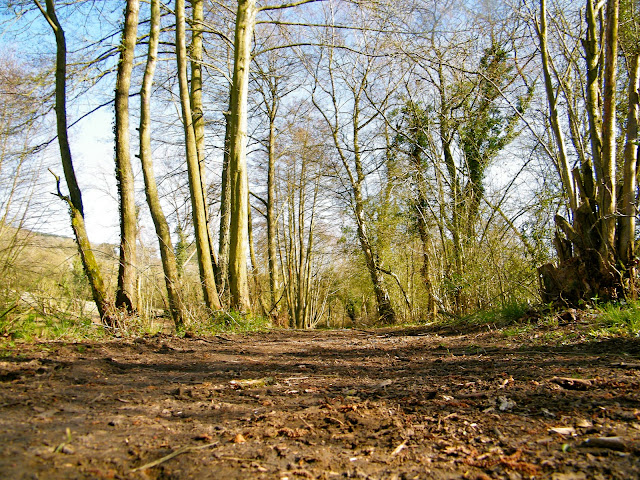 Worms are an awesome bait. There is not a fish alive that will not take them as bait. Even predators like Pike fall for them on a regular basis. If I was told to fish only one bait for the rest of my life I would choose them over everything else.
Now I could creep about at dusk, just after it has rained and collect plenty but I am inherently lazy and also my wife would go nuts and say I should be helping her with the kids bath and bedtime so I buy mine. The only problem with that is they are bloody expensive. Then there is the question of what to do with the left over wrigglers at the end of a fishing session? Chuck them in the swim, no way, I am a Yorkshireman so I take them home. Then I forget about them, they go mouldy and die so I thought it was about time I made a wormery and tried to keep them alive. That is exactly what I did last Autumn.
We had an old dustbin kicking about so I commandeered it, brought in a bit of child labour in the shape of my then five year old daughter Maisie and set to work.
First job was to drill some drainage holes around the bottom of the bin. 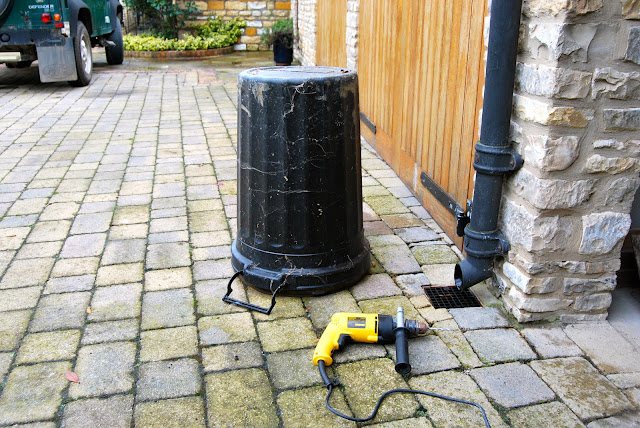 Being the good Father that I am that was my task despite Maisie's protestations. 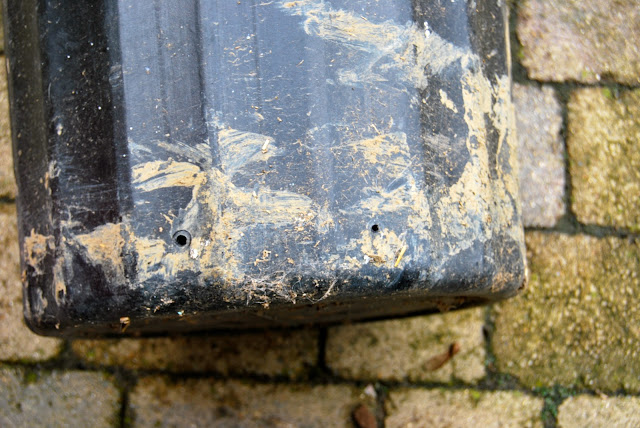 Ten holes about an inch and a half above the base. These would make ideal escape routes for worms so we took the bin to put some gravel in the bottom, this would stop the worms burrowing down to the holes. 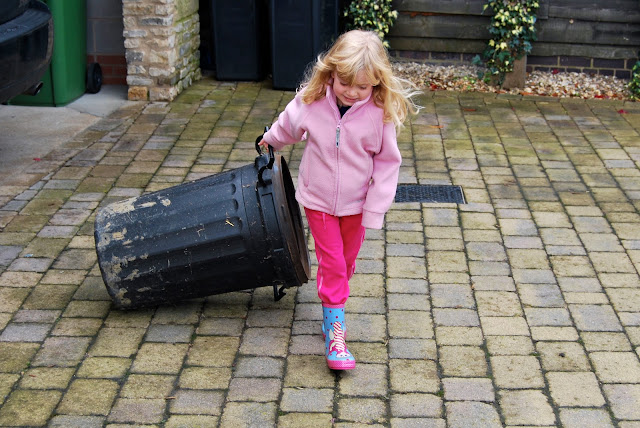 Maisie dragged the bin and helped with the gravel collecting. 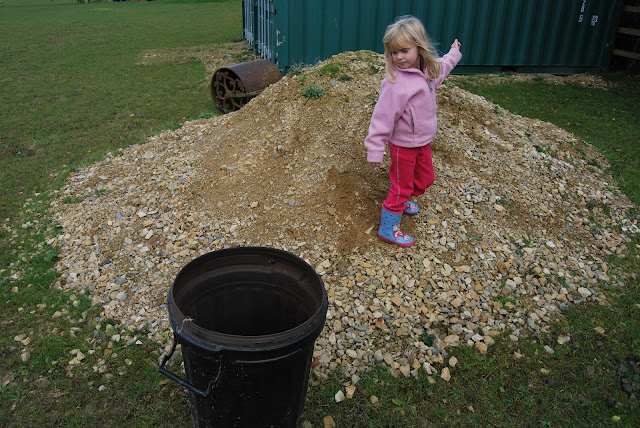 Until she got bored and decided throwing stones was more fun, kids eh!
We filled it to about three inches in depth, thinking that was enough to avoid losses. 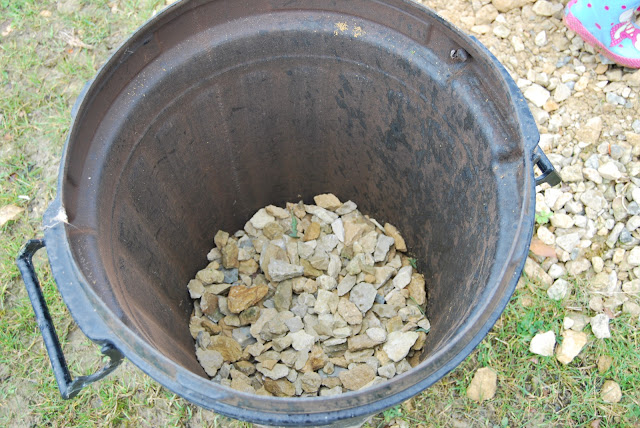 Then we added soil mixed with a bit of horse manure and some fruit and vegetable peelings to feed the worms. 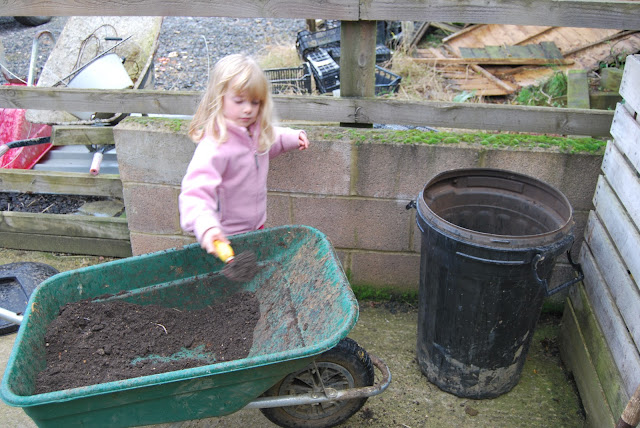 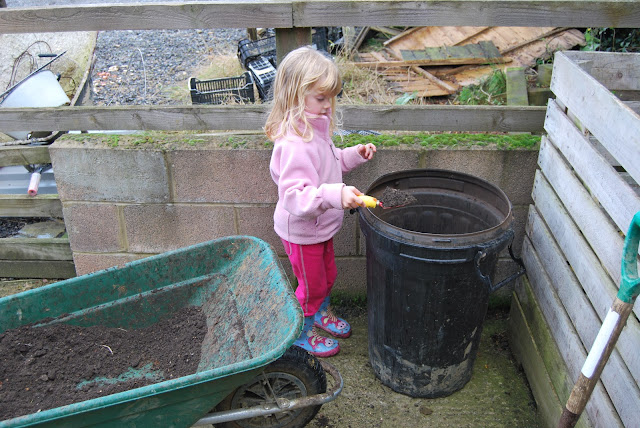 With the task completed we chucked in the remainder of worms from a previous session and promptly forgot about them. The worms were both Lobworms and Dendroboenas which I thought was a risk but what the heck, if they died they died, nothing ventured, nothing gained.
This week with the weather warming up and Spring Tenching beginning to occupy my thoughts I checked to see how they were getting on. Flourishing is the only way to describe them and the wormery is a resounding success. The different species are co-existing quite happily too! Roll on the next fishing trip.
Posted by Joe Chatterton at 09:47 3 comments:

A day of two halves with a last minute winner

When the self-proclaimed 'Perchman' Martin Roberts invited me for a day chasing the striped fish with him on his favourite venue I jumped at the chance> Perch have for a long time been my nemesis, I seem to be able to catch them up to a pound or so but the bigger ones keep eluding me. This was a chance to visit new angling grounds and to learn about catching big Perch.
As we pulled in to the car park we knew that we were in for a difficult day. Ice and lots of it, there were the odd small clear patches but nothing fishable. Decision time: clear some ice or clear off. We decided to give it a go. 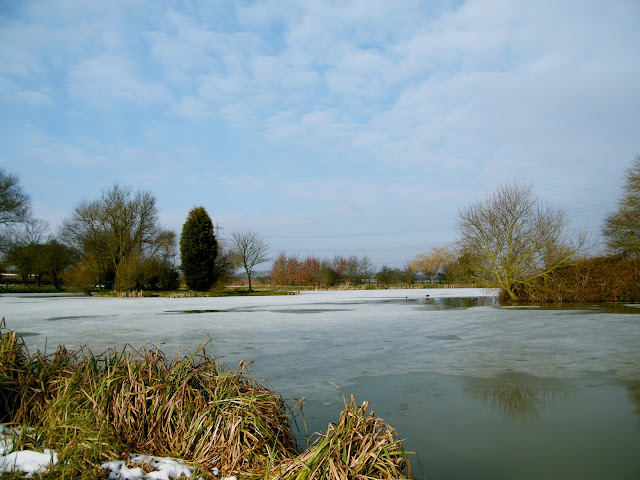 Martin fetched his pole and we used it to move and break up the ice in two swims.
To start with we would be happy to catch anything in order to avoid a blank. Martin started well landing a small snotty Bream and a decent Roach, "2 nil" he quipped.
I chuntered to myself and battled on through the snow. 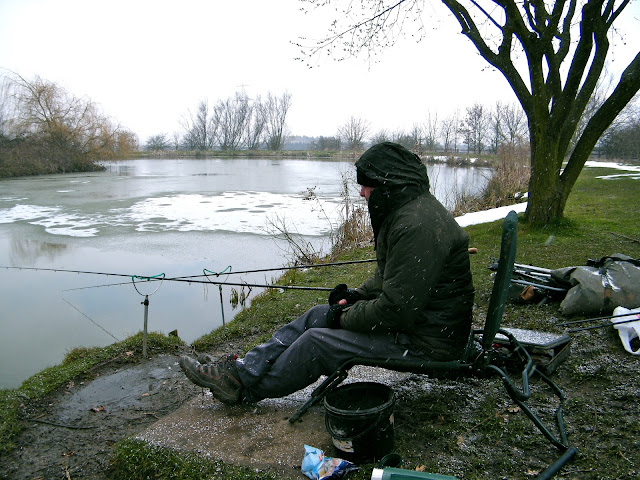 Eventually I landed a small Roach and then followed that quickly with a couple more, "3-2" I quipped back.
By this time the morning had been and gone and the ice was clearing rapidly, A huge sheet drifted across my swim and the decision was made to have a move. Martin headed for the island and I dropped in to a really fishy looking swim where I could place a bait under a tree, all fish love cover. My Prawn hookbait was snaffled before I could get a second rod out and I landed a 1lb 3oz Roach. 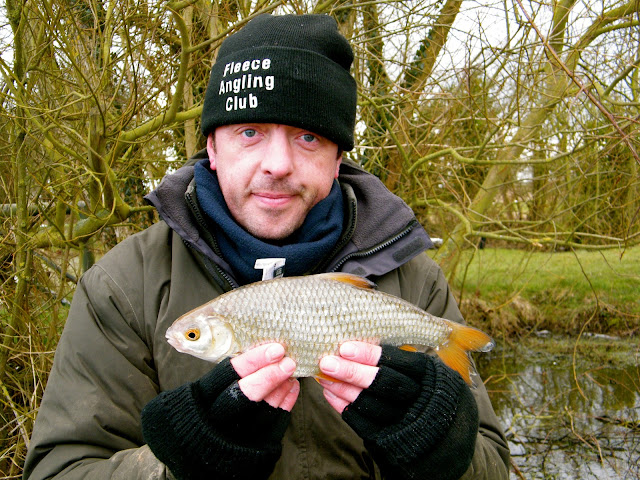 This was followed by several others up to 1lb 1oz, a Rudd, a few small Bream and then eventually our target fish, a 1lb 2oz Perch. Not the monster I had hoped for but it renewed our enthusiasm. 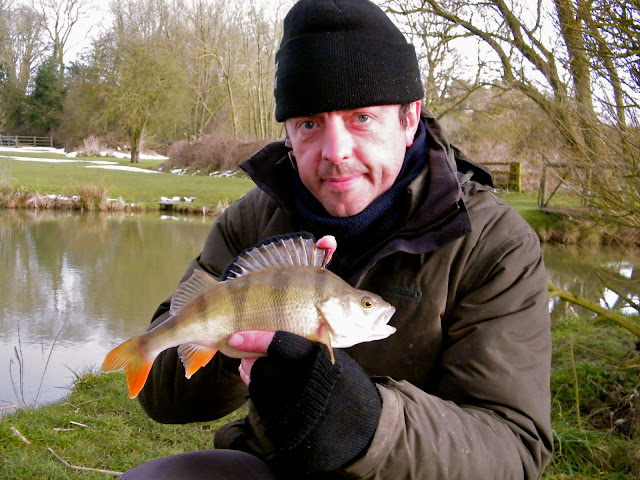 The sun even came out! 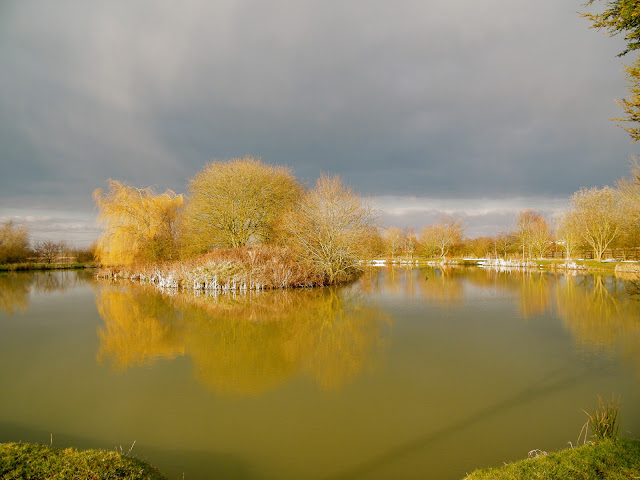 Martin's swim was very quiet but he fished on determinedly, local knowledge telling him to stay in there until dusk. He was right.
As the light faded he struck into a lump that led him a merry dance charging all over the place. He shouted across that he was into a Carp or the mother of all Perch. It turned out to be a stunning Ghost Common, isn't he pleased! 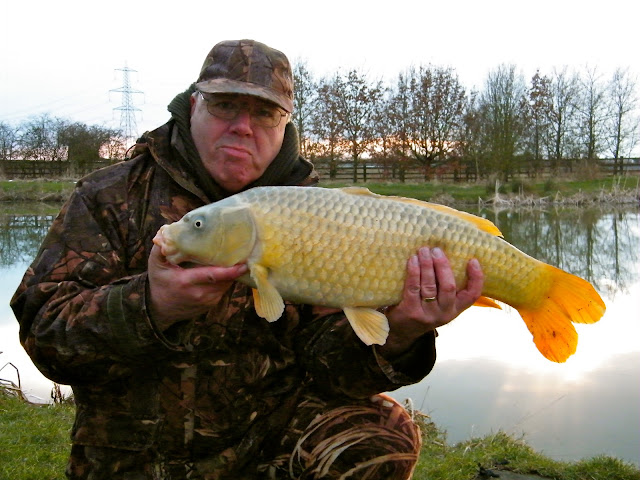 I thought that would have stuffed up his swim but within minutes he had another fish on, this time the target and he landed a cracking 2lb 11oz Perch. 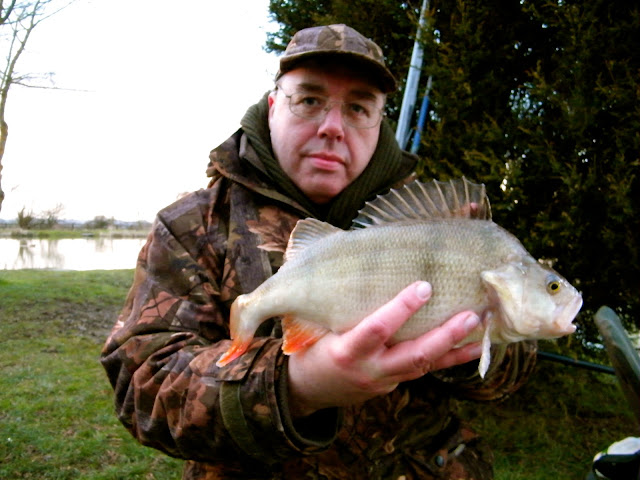 From zero to hero in the space of a few minutes. That turned out to be the end of the action, a cracking days fishing considering the difficult conditions and I went home knowing I had learnt a lot from Martins's methods on how to go about chasing big Perch. Hopefully I will personally fare better next time against my nemesis(the big Perch not Martin!) 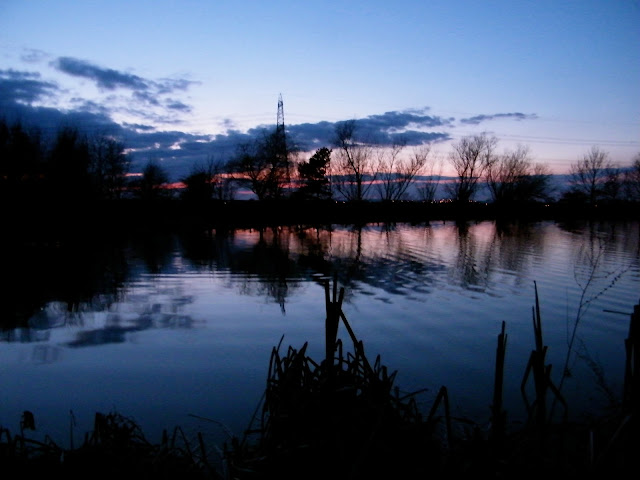